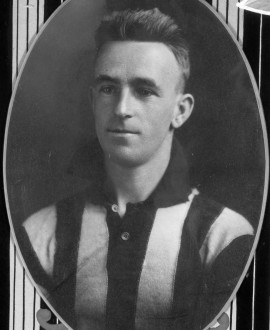 It is arguable that no Collingwood player in history has ever had as close a relationship to the Victoria Park ground as Tommy Bird.

Tommy was the son of Alexander Thomas Bird, also known as Tommy, who was a huge figure in the suburb of Collingwood in the late 1800s. A local Councillor and businessman, he’d been involved with Britannia, and became heavily involved with the newly-formed Collingwood Football Club in the 1890s. Young Tommy and one of his brothers, Leo, both played senior football with the Magpies. Another brother, Les, played seconds.

Tommy was the first one to make the breakthrough. Like his brother he was a quick and clever midfielder/forward, with a similarly deadly eye for goal. He spent more than six seasons with the Collingwood seconds, during which time he amassed an impressive scoring record of nearly two goals a game, captained the team in 1928 and was in all probability their leading goal kicker in 1926 (records are incomplete).

Tommy’s senior appearances came a long way apart. He debuted in 1925 and played two games that year, then followed up with seven more in 1928. He kicked three goals against Carlton in Round 7 and The Sporting Globe felt he’d done enough to warrant further chances: “He made the best impression for some time,” the paper wrote. “Playing forward he kicked three goals. His general play was clever and cool and there is a possibility that he will win a permanent place as a member of the side.”

Unfortunately things didn’t quite work out that way. He was dropped just one week later, and even though he returned to the team a few weeks after that – and kicked two more goals in his last game – couldn’t hold a spot for the finals.

But Tommy was always more interested in cricket than football anyway. Indeed he even gave up football for a time to concentrate on his first sporting love. Tommy was an outstanding wicketkeeper/batsman with the Collingwood District cricket team and was good enough to play several games for the Victorian side in 1928–29. He played as a specialist batsman in two of those and scored 22 and 63 on debut in a match where Don Bradman made a lazy 340 not out. Plenty of judges felt he should have played for the State far more often than he did.

Tommy spent lots of time out in the middle of Victoria Park, either behind or in front of the stumps. But in 1932 that commitment took on a new dimension when he was appointed the ground’s curator, a post he would hold for 30-odd years. And Tommy’s son, Ron, became a wonderful cricketer who won the very first Ryder Medal for the best player in the Melbourne district competition. He also had the great joy of growing up in the curator’s cottage at Victoria Park, having that famous patch of turf as his own backyard.

Even though he didn’t have a huge impact in his football career, Tommy Bird was an important part of the overall Collingwood fabric in the 1920s, ’30s and beyond. He and his family were a big part of the Magpie community for many years.