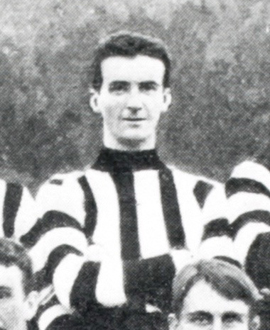 Tommy Worle was the very essence of a local recruit.

Born a few torpedos from Victoria Park, educated across the road at the State School known as a “factory” for league players and recruited from Abbotsford – he was almost destined to wear black and white. And even if, in the end, his career at Collingwood would prove short and largely unremarkable, he still made his presence felt on the football field.

He would do even greater things on the battlefield.

Like many young men of his generation, Worle had a single-minded passion for football and for soldiering. He would balance the two by playing the sport at the highest level (albeit briefly) and serving his country in its hour of need.

His early military record shows he served for eight years at the Albert Park Battery, where he had been a sergeant of the field artillery. He balanced that with playing football with the Abbotsford club, which was to prove one of the great feeder sides for the Collingwood Football Club.

Such was his form with the local football side that he came under the notice of the Magpies and won a spot on Collingwood’s list for the 1907 season – in what was a year of transition for the black and white. Some of the most famous names in the club’s short history departed either before or during that season of change, a situation which necessitated local replacements.

Worle was one of those young hopefuls, and was rewarded for his good training and solid form with a debut match at centre half-forward in Round 4 against Melbourne at Victoria Park. It was hardly a happy initiation, given the Magpies allowed Melbourne to finish over the top of them, coughing up an eight-point advantage at the final change to lose by two goals.

He was retained the following week, to play against Essendon at the East Melbourne Ground, though he was pushed down to the back pocket. Collingwood won the match by nine points.

His third and final game was against Geelong at Corio in Round 7. Again, Worle had a positional change, this time as a follower. Despite the changes to Collingwood’s playing list that season, the team still possessed good talent, and Worle had to make way for others and could not regain his spot in the seniors. As a result, he played with Collingwood Districts, but no matter what happened he could not win his way back. He was still playing for (and captaining) the District side in 1911, as a follower alongside his roving brother, and was noted for his “conspicuous play”.

Worle ended up playing with Brunswick – the Victoria Football Association’s Magpies – and then later Alphington. Old Boy, from the Australasian, described his debut for the ‘Wicks against Essendon Association. The paper said: “Two men from the League, T Worle, one of Collingwood’s reserves, and (Dave) Gillespie, of Carlton, were both conspicuous, the first name forward, where he scored three goals, and Gillespie on the backlines.”

Tragically, both men would make the ultimate sacrifice for their country.

Gillespie was horrifically wounded on July 19, 1916, and not even a return to Australia could change his circumstance. He died of his wounds on March 27, 1917, at the Caulfield Military Hospital.

Worle joined up five days into the New Year of 1916. He was married to Elsie and was living at 22 Langridge St, Abbotsford at the time. He embarked from Melbourne on May 20 that year, and landed at Plymouth almost two months later. More training followed, and he proceeded to France on the penultimate day of 1916.

Worle was a Sergeant in the 8th Brigade, Australian Field Artillery. He was killed in action near Armentieres, and was buried in a cemetery at Nieppe. As a final resting place it was a long way from home for the hopeful young local recruit.