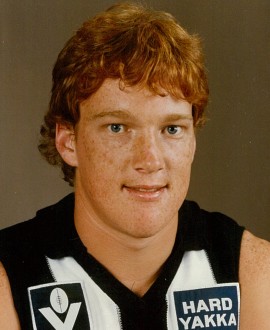 That’s a hell of a way to bookend a VFL career that only amounted to three games but which, for a while in the early 1980s, looked like it would deliver so much more.

Keenan played his junior football at Greensborough and was a part of Richmond’s Little League premiership team in 1975 (as a Tigers fan that was a real highlight). The Tigers obviously liked what they saw, because a few years later they came calling again, asking Collingwood to release him from their zone and offering to pay a sizeable transfer fee and his Eltham College school fees. But the Magpies refused, signed him up and paid the last two years of his schooling.

Keenan arrived at Victoria Park in 1980. He played 18 games with the under-19s that year, mostly as a key forward or in the ruck, kicking 32 goals as a 16-year old. He continued his grounding with the under-19s in 1981, moved mostly to centre half-back with stints in the ruck, and was also named captain of a Victorian Teal Cup team that included future stars such as Dermott Brereton, Gary Pert, Andrew Bews, Paul Salmon, Steve Wallis and Tim Darcy (Keenan had been an under-age Teal Cup performer in 1980).

Clearly, anybody who could captain a team like that was a seriously promising player. And the Pies’ high hopes for Keenan were confirmed the following season when he was added to the senior list and achieved the rare feat of passing through all three grades in the one year – starting in the under-19s where he’d been made captain, being elevated to the reserves where he quickly showed a capacity for kicking goals against bigger-bodied opponents (despite tearing ankle ligaments in his first game) and finally playing his first two senior games.

But while the 1982 season was a rewarding one for Keenan personally, it was a disaster for the club as a whole. The Pies won only one of their first 10 games, prompting the sacking of coach Tom Hafey. After a couple of wins under stand-in coach Mick Erwin, they then lost another nine on the trot, in the middle of which came news of Ranald Macdonald’s ‘New Magpies’ and their push for power. The newspapers were full of ‘Magpies at War’ type headlines.

It was in the middle of this febrile internal atmosphere that Tony Keenan made his senior debut. He’d already shown he could mix it with senior players, having kicked bags of six and five in the reserves. He, Tony Russell and Mark Lawson were all named for their first games against Essendon in Round 17 as the Pies desperately looked for some green shoots nearing the end of an awful season.

Keenan started on the bench, came on late in the last term and juggled a mark that should have been paid. His solitary handball didn’t keep him in the team, but he returned again for the last game of the year (after another bag of six against Hawthorn reserves) – although this time he played in the back pocket.

Keenan was pretty skinny when he arrived at Collingwood but he was extremely mobile for a big man, standing around 6’3” in the old language in his first appearances and ending up around 6’5″. His father was a one time world junior mile record holder in the 1950s and his mother a state level sprinter, and Tony inherited much of their athletic ability. He was also a decent mark and a wonderful long, straight kick. It was an enticing package.

Keenan was named the club’s best local recruit in 1982 and also polled well in the reserves best & fairest. Everything – everything– pointed to a big 1983.

Instead that’s where his career began to unravel.

The 1983 was a mirror image of 1982 – but in reverse. He did pre-season with the seniors, started the year with the reserves but soon found himself back in the thirds again. He spent the season flitting between the seconds and thirds, amassing 46 goals across both grades (including a nine-goal haul against Richmond reserves), but there were no more senior opportunities until the following year. And that one – Round 11 of 1984 – was also to be his last.

By then the Magpies had set their sights on a Melbourne ruckman named Glenn McLean. One of the messiest clearance wrangles of all time followed, including McLean taking the VFL to court and the Pies reserves losing four points after they played McLean without a clearance. In the end Collingwood paid a huge fee for McLean just before mid-season clearances closed, and threw in Keenan as a ‘sweetener’ after fabled junior coach Ray Jordan expressed interest (McLean would go on to play only two senior games for the Pies and his transfer would go down as one of the worst of the New Magpies era).

But more bad news was to come for Keenan. He had injured his knee in his last game at Collingwood, playing centre half-forward in the reserves. The Magpies’ medical staff wanted to operate but he was traded days later, even though he didn’t want to go. The Demons rested him, then played him in two reserves games before deciding that the knee did indeed require surgery.

After a big off-season he dislocated his shoulder in the first training session of the 1985 pre-season, and it continually popped out thereafter. The Demons brutally dropped him from the senior list before the season even began. He played on with Preston in the VFA but continued to suffer shoulder issues. He had another go at Victoria Park in 1986 to no avail, and ended his career with stints at Bulleen-Templestowe (named in the all-Australian Amateur squad) and Norwood in the SANFL. By 24, plagued by constant knee and severe shoulder problems, his footy career was over.

Tony Keenan ended up playing nearly 100 games for Collingwood across all grades – three in the seniors, 33 in the seconds and 58 in the thirds, kicking 122 goals along the way. A seriously talented player, he became a classic example of the junior star for whom the cards never quite fell the right way once he got into the VFL system.