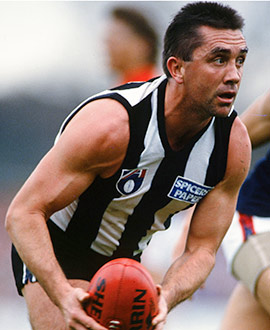 Whenever talk turns to the great Collingwood captains, Tony Shaw’s name is always near the top of the list. And justifiably so, for Shawry’s intense and driven leadership played a huge role in guiding his teammates to their fabled drought-breaking Premiership of 1990.

But so did his footy. It remains one of the great curiosities of the game that, despite a career that included two Copeland Trophies, a Norm Smith Medal, a number of Victorian jumpers and 25 years spent as the club’s games record holder, Tony Shaw’s value as a player can still be undervalued. He might just be one of the most decorated underrated Magpies of all time.

The criticisms people levelled at his game over the years were largely true; his kicks never travelled far, he was not quick, he could not leap for marks. But he could always do one thing better than just about anyone else — get the ball. And that is every bit as much a skill as are the other facets of football. It is no good being able to run like a deer or kick like a mule if you can’t get the pill in the first place. And that is an area where Tony Shaw was never found wanting.

He was always a remarkably high possession-winner, regularly near the top of the League’s average disposals. He averaged just on 25 touches a game across his career, but in his prime was tallying more than 600 a season. In his best year, 1990, he gathered a staggering 736 possessions (Scott Pendlebury’s best, by way of comparison, is almost identical at 742). He rarely wasted a kick, and his handball was amongst the most constructive in the game.

When a bloke gets 30 or 40 touches a week, and uses them as intelligently as Shawry did, it doesn’t really matter too much if he doesn’t have a great highlights reel. Instead, his great strength was in getting the ball and getting it to a teammate. Few did it better, or as consistently, or for as long.

But there were few indications of what was to come when he started out at Collingwood in the late 1970s.

The Shaw family lived in the Housing Commission area of Reservoir and, by Tony’s own admission, life was a bit of a struggle. But if money wasn’t plentiful, sporting talent certainly was. His father Reg was a successful VFA footballer with Brunswick (he won the equivalent of the Liston Trophy) and mother Eileen was a good netballer. Tony’s two sisters, Judith and Christine, made their marks in basketball and netball respectively. Eldest brother Ray would go on to captain Collingwood. Kelvin captained the under-19s and played in the reserves. Neville, the youngest, was probably the most talented, but in the end managed to play just over 40 senior games. Their boyhood sporting contests were as diverse as they were aggressive; cricket, footy, basketball, running, you name it and they were into it.

The impact of Shaw’s background really became apparent when he first took to sporting fields outside the confines of his family home. From that moment there were certain things that became obvious about Tony Shaw: his commitment to hard work, his competitiveness and the importance he placed on “the team” and a sense of camaraderie. All became Shaw trademarks; all can be traced, at least in part, to his early influences.

He played plenty of sports: basketball was a particular favourite, he was a handy right-arm quick at cricket and a gun long-distance runner. While playing footy with Keon Park he won four club best and fairests. He decided to follow Ray to Victoria Park and had an aborted trial with the under-19s before spending 1977 with Reservoir-Lakeside seniors in the Diamond Valley Football League.

Although still eligible for the under-19s in 1978, Shaw went straight into the reserves and won the team’s best and fairest award from just 14 games. Late in the season he was given his first taste of senior football, and did well enough to hold his place into the finals’ series. By 1980 he was a regular selection in the seniors, but his status as an established star still seemed a long way off. Many thought he would be a consistent, grafting battler but little more.

But his career changed after he completed the 1983 Big M Melbourne Marathon with former teammate Mark Hannebery. Finishing that showed him what was possible if he set his mind to something and worked hard to achieve it. He put those lessons into effect on the football field with immediate results, winning interstate selection and his first Copeland trophy in 1984. From that point, he was one of the most valuable players in the game.

At Collingwood, his value to the team was inestimable. He was a magnificent leader who set an outstanding physical example to his players. He had unbelievable courage, played with injuries that would have stopped others, never gave up on the field, and was as desperate and committed as anyone playing the game. He always pushed himself to the limit, even at training.

“It inspired me just to watch him in action,” said Gavin Brown. “Mentally, he is the toughest bloke I’ve ever met. He is totally and utterly involved in what he is doing on the ground.” Peter Daicos said Shaw’s motivation was second-to-none. “He just kept going and going,” he says. “He was a tremendous motivator on-field, with continuous talking and encouragement.”

He was no less vocal off-field either. Like brother Ray, Tony always had “a bit of a mouth”, and in football he used it frequently – on umpires, opponents and even his own teammates. He could be hard on his colleagues, especially if he felt someone was slackening off or looking for an easy way out. But he was also one of Collingwood’s great “stirrers”, and an intrinsic part of the club’s social fabric.

When he finally retired in 1994, with Collingwood’s games record of 313 to his name, there seemed little doubt he would continue in football in some capacity. And sure enough it has been his life ever since. He assistant-coached in ’95, then was appointed Collingwood senior coach in 1996. But the club struggled in those years and he left at the end of 1999, his last game as coach also being the last the club played at Victoria Park. He then became an outspoken and highly regarded media commentator with 3AW and other media outlets.

He never lost his love for Collingwood, however. And it must have been a bittersweet moment for him late in 2020 when Scott Pendlebury, another left-footer with a happy knack for finding the footy, finally broke his 313 games record.

Tony Shaw held that record for 26 years, which is no small achievement. But it’s just one of many accolades gathered along the way in what turned out to be a wonderful career for an old-fashioned footballer who gave absolutely everything he had for the Collingwood cause. And then gave more again.