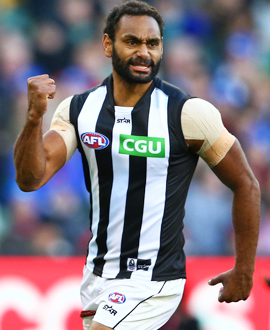 Already a premiership hero at Geelong, Varcoe didn’t take long to become a familiar face in Black and White colours in 2015.

Finding a place in Collingwood’s side in round one, the 27-year-old ended up being one of just four Magpies to play all 22 home and away games for the year. He experienced the highs of an 8-3 start, and the lows of a six-game losing streak against the likes of Fremantle, Hawthorn and West Coast throughout the middle of the season.

Varcoe brought a sense of consistency and toughness to what was a young, largely inexperienced Collingwood team. He recorded high tackling numbers with totals of nine against St Kilda in round three and another eight in round 13 against Fremantle being the standout performances. While tackling proved a highlight, many of Varcoe’s statistics in 2015 signalled a career-best year. Never has he recorded higher averages in kicks (8.4), marks (4.1) and disposals (17.2) per game.