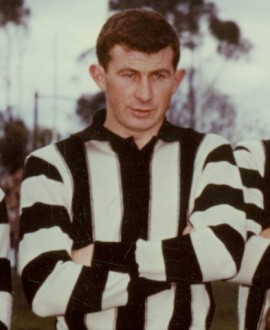 In the 2000s, there were plenty of football teams that would have killed for a player with Trevor Steer’s combination of talents.

Here was a player tall and skilled enough to hold down a key position either forward or back, but also good enough as a ruckman to win a Copeland in that role. He could palm to perfection in the ruck, take marks around the ground, kick goals up forward or clamp down on tall forwards while in defence. He really was the ideal swingman.

Yet his career lasted only six seasons, and he would join contemporaries such as Ian Graham, David Norman and Mick Bone, all of whom – for different reasons – played less senior football than might have been expected. 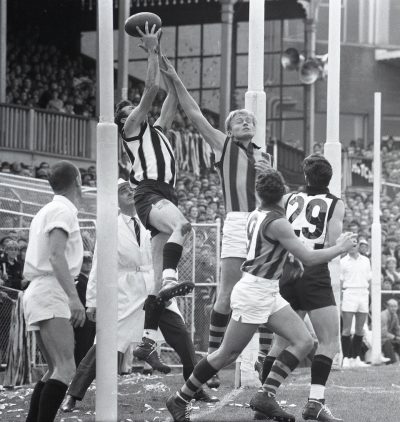 Trevor’s journey started on his family’s dairy farm at Drouin. He headed off to boarding school at Scotch College but he was no star at footy – in fact he was barely able to hold a place in the school’s fourths football team. But then he grew more than 17cm in a year – and suddenly his natural talent for the game emerged. He began dominating with a church side, St George’s, in East St Kilda, then returned home to play in Drouin’s 1958 flag side before spending two years with University Blacks whilst completing his teaching degree. He was a star there, winning the best and fairest in 1960, being selected as a ruckman for the Victorian Amateurs in that year’s carnival and then being chosen in the all-Australian universities team.

Then, out of nowhere, Collingwood came calling. Neil Mann paid an unscheduled visit to his aunt and uncle’s place in East Preston, where he was boarding, asking him if he wanted to play centre half-back for the Magpies! It turns out that one of the club’s recruiters, Jack Pimm, had been impressed after seeing him play against Alphington earlier in the year.

It was a remarkable offer, coming just weeks from a finals series that would ultimately take Collingwood all the way to a Grand Final. But Trevor declined the chance, partly out of a desire not to let down his Uni Blacks teammates, and partly because of private doubts as to whether or not he was ready for the rigours of League football.

Any doubts had disappeared by 1961, however, and he turned up to pre-season training at Victoria Park and proceeded to put in a series of outstanding performances during the practice matches in the ruck and as a key forward. Magpie selectors could scarcely add his name to the senior list quickly enough, and then he was chosen to play in a forward pocket for the first game of the season – no acclimatising in the reserves! He made his way down to Kardinia Park and early in the game read the ball beautifully to mark and run in to goal with his first kick in League football. He kicked two that day and attracted positive reviews

“Steer made a fine debut,” wrote one paper. “Impressed with sound positional play and strong marking in ruck and forward. Among his side’s best players.”

In the end he played 14 games and kicked 11 goals that first season, including a bag of four out of a team total of seven against Melbourne in his first ever game on the MCG, a real personal highlight. That was a more than decent debut effort, especially considering he’d been living in Wonthaggi for the year after receiving his first teaching post there. That meant he trained mostly with Wonthaggi, only coming to Melbourne on Fridays (staying with relatives in East Preston), and only training with his Magpie teammates during school holidays.

By 1962 he’d found a teaching job at Lakeside High School, and was at last able to train regularly at Victoria Park. He continued on his good form from that debut season and cemented a regular spot – if not a regular position – over the next few seasons. He spent time at full-forward, centre half-back, the back pocket, the forward pocket and the ruck.

And rucking was the role he loved the most. He stood about 6’3” in the old language but had a wonderful leap on him, excellent judgement and good hands. Initially very skinny, he filled out well enough to be able to compete with the bigger-bodied ruckmen in the game at the time.

What he had over most of his opponents was a mastery of the art of palming: he was adept at tapping the ball wherever his rovers wanted it. Len Thompson, himself acknowledged as a master of the art, would later publicly credit Trevor for educating him in the finer points.

For all his skills in the ruck, he still most often found himself pinch-hitting there, behind both Graeme Fellowes and Ray Gabelich in the pecking order. But by 1965 Fellowes had retired, and then Gabbo injured himself early and missed a large chunk of the season. The result was that Trevor spent more time in his preferred role that year – and he starred. He was typically creative in the ruck contests, giving his rovers the classic ‘armchair ride’. But he was equally impressive around the ground, taking marks, dominating games and even kicking goals. It was no surprise when he walked away with the Copeland Trophy. He was also named in The Sporting Globe Team of the Season, and most newspapers rated him among the best high marks in the League. 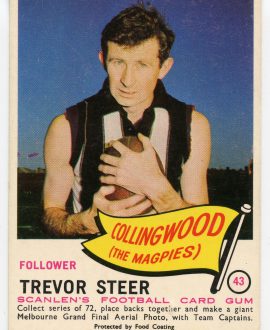 His performances in 1965 were enough to win him the vice-captaincy in 1966. But they weren’t enough to keep him in the #1 ruck spot. Gabbo came back, and the emerging Thompson didn’t take long to jump both of them to the front of the queue. So Trevor spent much of the season in the forward or back pockets, getting only occasional runs on the ball. By the time of the Grand Final, he was on the bench (and ironically was the Magpie defender who went closest to getting his hands on Barry Breen’s infamous wobbly punt kick that won the game).

By then, Trevor knew his VFL days were coming to an end. He had already sensed that his opportunities were only going to decrease, and before the finals had been offered a lucrative playing position in Wangaratta (including a teaching job for himself and a nursing position for his wife Jill). After talking to his coach, Bob Rose, (who himself had ended his VFL career early to play in Wangaratta) he decided to accept. And so, incredibly, just a year after winning the Copeland and still aged only 27, Trevor Steer walked away from League football.

He spent four successful years with Wangaratta, and made an arguably even bigger impact on the cricket fields there, where his fast bowling helped turn the local team into a powerhouse. He played for a combined north-eastern side against a Victorian Shield team at Benalla, and then was chosen to lead a Victorian Country XI against the touring West Indies at the Wangaratta Showgrounds in 1969. That gave him one of his great sporting moments, immortalised in the photo on his mantelpiece of him tossing the coin with the legendary Sir Garfield Sobers. He continued to play cricket into his 50s. 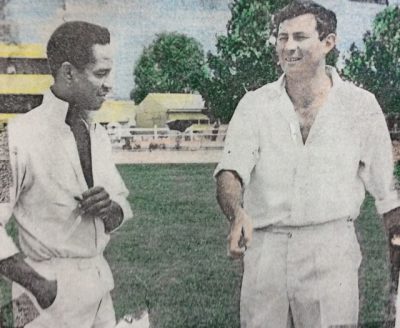 After Wangaratta it was Kilsyth, then Healesville, where he ended his footy days with five goals in a winning Grand Final. He continued teaching and ended up as principal at Mirboo North Secondary School, then turned to farming at Inverloch.

Trevor Steer won a Copeland and was within a goal or so of being a dual Premiership player at Collingwood. He gave great service across 88 games and six seasons. But you still wonder whether the Pies made the most out of their wonderfully talented big man: more time on the ball might just have been a winning move for both player and team.