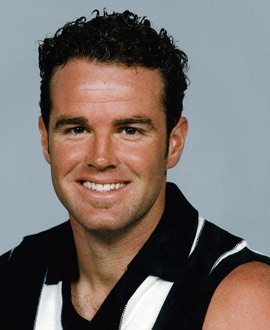 Lane joined Footscray from Melton at the age of 16 and although he showed flashes of brilliance in the reserves he struggled to get a senior game, and was swapped for Josh Mahoney.

He had asked to be traded even though he had starred in the Dogs’ 1998 reserves Grand Final triumph, and his four goal performance against the Magpies on a Friday night in late 1998 must have stayed in the minds of the Collingwood recruiters.

At the Bulldogs, he had been groomed as a possible half-forward or onballer, but at Collingwood he became a senior regular in a new role at half back in his first season.

He ran sixth in the Copeland Trophy and played 20 games in the season to exceed his total with the Bulldogs in four years.

He spent much of 2000 in the VFL but went a long way to saving his spot on the senior list with 20 disposals and three goals against the all-conquering Essendon in round 22.

Lane struggled for a game early in 2001 but played 13 games after round seven, and it was a surprise when he announced his retirement on the eve of the 2002 season at the age of 25.