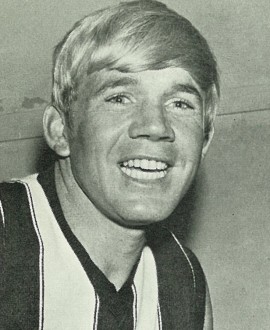 In 1963, a blond-haired moptop named Carl Ditterich burst onto the VFL scene with St Kilda. It might be hard to reconcile for those who remember him only as the bruising hard man he later became, but when Ditterich debuted in ’63 he electrified the football world with his athletic high-leaping and spectacular play.

The very next year, Collingwood thought it had found its own version of ‘Big Carl’.

Vaughan Ellis came from Cheltenham as a 16-year-old and joined the under-19s that year, playing 10 games with the thirds and a handful with the seconds. Such was the buzz around him that, before even making his senior debut, he was the subject of a photo story in The Sun newspaper, noting the similarities between him and Ditterich, and the fact that the two had played against each other once. Murray Weideman was even quoted, saying that Ellis “looked like a blond Beatle”.

So it’s fair to say that, by the time Ellis was named to make his senior debut against St Kilda in the opening round of 1965, Magpie fans were beyond excited to see him at work (Peter McKenna also made his debut that day, in what was the Saints’ first game at Moorabbin).

And who could blame them? Here was a kid, just 17, who stood about 6’3” in the old language (191cm or so) and weighed just over 13 stone, and who could soar with the best of them. He had a great leap, good hands, was strong in the contests yet athletic enough that he could cover the ground easily. He had just about the perfect profile to be a ruckman. And if it was that shock of blond hair and the similarities to Ditterich that had gained the early attention, it seemed only a matter of time before his football alone did the talking.

The early signs were encouraging. He played only four senior games in that first season (though one of them was the preliminary final), and 17 more with the reserves. He was best on ground in the reserves’ winning Grand Final. The club later described him as “one of our most promising recruits of 1965”. The Sun noted that he had already been marked down as “a player with a future”. “His play in the reserves has been notable for strength and directness,” it said.

And yet. Despite all that promise, his career never quite took off the way so many expected. Mostly, that was down to opportunity. He started each of those first four senior games in 1965 on the bench, and in all four only came on in the last quarter.

That started a trend which continued into 1966 and through 1967. There were only five senior games across those two seasons, and the first four again came from the bench. It got so ridiculous that the cheer squad even developed its own chant for Vaughan, ‘celebrating’ his run of successive bench starts (they called him ‘The Nineteener’, as in 19thman). In the end he didn’t get his first on-ground start in a VFL game until his ninth outing, in Round 18 of 1967, when named at centre half-forward against St Kilda.

By now he was a big unit, weighing in around 15 stone, and earning a reputation as a rugged competitor who prided himself on being hard at the ball. So it couldn’t have been about protecting him physically. Even now it seems a crazy way to have handled a young player. Of course it didn’t help that he had emerged at the same time as a generational ruckman in Len Thompson, and a more than handy foil in Graeme Jenkin, with Terry Waters thrown in for good measure. But despite continued solid form in the seconds – he captained the team in 1967, at age 19, and won the B&F the next year – Vaughan rarely got more than the barest sniff of senior action.

Still the Magpies kept holding onto him, seeing the potential and hoping he would take the next step. Four more games followed in 1968 (two of them, inevitably, on the bench). He finally got his best run at things early in 1969: six of the first seven games (though three were still as a reserve), and he bagged three goals – the only three of his career – and was named among the best players as a centre half-forward against Richmond. Two weeks later though, he was back on the bench again.

In the end it all got too much. After 19 senior games spread across five seasons – with only five starts in that time – Vaughan Ellis decided to walk. He tried to get a clearance to South Fremantle or Fitzroy before the mid-year transfer cut-off in 1969, but each time the Magpies refused. So he crossed to Dandenong in the VFA mid-season without a clearance. Incredibly, he was still only 21 when he left.

That started what proved to be a fine VFA career, first with the Redlegs (five seasons) and later four years with Frankston, where he won a best-and-fairest. As a tough, goalkicking follower-forward he was a formidable force at VFA level. A plumber by trade who turned his skills into a successful business, he would later go on to also become a prominent property developer.

No matter which way you look at it, it’s hard to escape the feeling that Vaughan Ellis never really got a true chance to show what he was capable of in the VFL. His performances in the reserves, the glimpses at senior level and what he showed later in the VFA all suggest there was a good footballer in there. All he might have needed was a decent run at it – and a little less time spent on the pine.