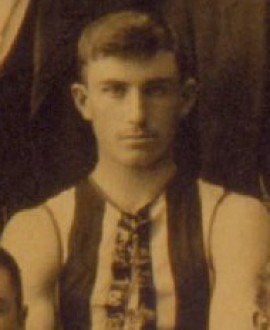 Fitzroy must have been looking forward to the opening round of the 1896 season.

For a start, the Maroons would be unfurling the 1895 Premiership pennant at their own ground. Even better, they would be doing so in front of their fierce local rivals from Victoria Park – a perfect opportunity for a bit of gloating and point-scoring. And better still, they were hoping to unveil a ‘crack’ new recruit from the Collingwood Juniors team.

That kid, called Walter Worthey Gillard, had trained with the Roys in the lead-up to the 1896 season, played in their practice matches and had been named in local newspapers as one of the newcomers likely to get a guernsey in the first game. And he did too – just not a Fitzroy one.

For some reason, Gillard changed his mind very late in the piece and decided to throw in his lot with Collingwood instead. And the Pies couldn’t have been happier – especially when the 21-year-old starred on his debut, kicking two lovely goals with long place kicks and helping to sink the Roys on what was meant to be a day of celebrations.

“Gillard shaped so well forward,” said the Argus. “He played the game like a footballer,” said the Australasian. “Gillard will make his mark in senior circles this season,” said the Sportsman. “Collingwood have got hold of a first-rater. His play forward was very good. He should be heard of pretty often, for his kicking is first-class.” All were in agreement that this kid from the Juniors with a big reputation was going to be a very handy player.

And so it proved to be. That opening game set both player and team on the road to highly successful seasons, with Gillard becoming a vital member of the line-up that ultimately delivered Collingwood’s first flag. He topped the club’s goalkicking that year (admittedly with a princely total of 13 goals), working in beautifully with established goalsneak Archie Smith. Most of the newspapers named him among the best forwards of the season.

His goal tally might not have been huge, but these were low-scoring times. And he often delivered when it counted, in May controversially winning a game against Carlton with the last kick of the match, his long shot sailing through just as the bell was sounding. (Carlton protested that the quarter had gone some five minutes longer than it should have, but their protest was ultimately dismissed.)

Gillard was a mid-sized forward who could take a good mark and was noted for his clever all-round game. But the real highlight was his kicking – long and mostly straight, although he blotted his copybook against Melbourne in 1898 when he kicked eight straight behinds out of a team total of 7.13.

That was the year in which he was named as an emergency for the League team game against Ballarat – a high point in terms of individual honours. It was also, coincidentally or not, the time in his career when he began to spend a little more time defence, where he also performed creditably.

He was married at the end of 1898 (to one of Collingwood’s “fairest supporters”, the annual report noted) but the 1899 season wasn’t a happy one, as he found himself starved for game time and struggling to settle in one position. He managed only eight games that year and disappeared off the radar in 1900 before officially being cleared back to Collingwood Juniors midway through 1901.

Wal Gillard is perhaps the least well known of all the players to have topped the club’s goalkicking in a given season. But he did so in a Premiership year, and that alone underlines just what a valuable role he played in the triumph of 1896.