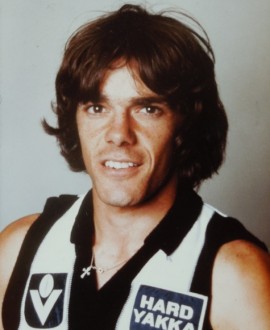 Collingwood’s first ever Indigenous player came to the club in 1982 almost by accident.

The Pies had been chasing another player from Heywood, near Portland, and when inviting him to training, asked him if any of his teammates were also worth a look. That player nominated Wally Lovett as a youngster they should talk to.

So it was that Lovett was invited to Victoria Park for the 1982 season. And such was the impression he made during that first pre-season – most of which he spent commuting from Heywood for training sessions – that he walked into Collingwood’s team in Round 2 and kept his spot for most of the rest of the year. That’s no mean feat when you remember this was a team that had played in the past three grand finals.

Lovett was a pocket dynamo on the field. He wasn’t tall but was stockily built and strong, and fast. He quickly made a name for himself as a feisty rover in the true Magpie tradition. He loved a stoush, loved going hard at the ball, and knew where the goals were. He could also take a decent grab.

All those traits were on show in his debut against Footscray, when he made what one newspaper described as a “fiery entry” to League football. Within seconds of coming onto the ground from the bench in the second quarter he clashed with Kelvin Templeton. He then got involved with Ray Huppatz. In the third quarter he was reported for hitting Doug Hawkins (though he later got off). Plus, to top off a dramatic debut, he goaled with his first kick in League football. “New boy Wally Lovett …showed enough dash to suggest there might be a genuine rover in the Collingwood camp after all,” wrote the Age.

If anything is designed to win over Magpie supporters, it is kicking an early goal and getting into a fight. So it was no surprise that Wally Lovett almost instantly became a Magpie fan favourite.

Lovett was born in Heywood, into one of the district’s most well-known families. His dad, also called Wally (and nicknamed ‘Midnight’), had been a more than handy footballer himself. Wally’s grandfather, Frederick, was one of five brothers who famously marched into town from the Lake Condah Aboriginal mission in 1915, demanding the right to go to the First World War and fight for his country, despite not being allowed to vote or even be counted as a citizen. Their case was held up as an example to all about the merits of enlistment.

All five brothers returned safely from the war, and four of them went again to the Second World War. Other family members continued to serve with the armed forces, giving the Lovett family one of the most distinguished service records of any family known across the world. The building in Canberra that houses the Department of Veterans Affairs has been re-named Lovett Tower.

The Lovett impact on football in Heywood was similarly profound. Wallys’ dad and his uncles were all big names. Wally himself ended up being chosen in the Heywood Team of the Century, despite playing only a few years in the seniors before crossing to Victoria Park in 1982.

He played 15 games and kicked 11 goals at Collingwood in that debut season – a terrific effort – in the midst of a chaotic and at times dysfunctional year that saw coach Tom Hafey sacked after 10 games. He even won a Goal of the Day segment for one he kicked against North Melbourne, for which he won a set of tyres from Bob Jane (where motoring great Jim Richards was store manager at the time!)

The club clearly rated Wally, as evidenced by the lengths they went to in order to get him home after a game so he could give away one of his sisters at her wedding that same night – organising a lift on the Channel 10 helicopter from Waverley to Moorabbin Airport, where a private light plane was waiting to get him to Portland.

The Australian Footballermagazine had this to say: “This sprightly little rover has made a big impact at Collingwood this year … with his great pace and ability to kick goals from almost any angle.”

Wally loved Collingwood, had settled in well and was looking forward to a long career in the black-and-white. His popularity with supporters was reinforced when the Cheer Squad decided to sponsor him for the 1983 season.

Then along came Geoff Raines.

The back end of 1982 had seen the almost inevitable board challenge, and this time it was the New Magpies who had been swept into power on the promise of big spending and a heavily funded new broom. David Cloke and Geoff Raines, two superstars from Richmond, were high on the shopping list. Clokey came on board, and when Raines agreed to join him, the Tigers pretty much were able to name their price. In the end, that came to more than $200,000 in clearance fees, plus Neal Peart and Wally Lovett as players. Wally was driving at work when he received the call to tell him he would be going to Punt Road.

Wally was hurt and disappointed, but didn’t want to rock the boat so reluctantly packed his bags and headed to Tigerland. In his first year there he was chosen as part of the first ever Aboriginal All-Stars team that played a combined Richmond/Sunraysia team at Mildura (Wally kicked four in a 37-goal team performance).

But his time at Punt Road was plagued with injuries – especially a succession of hamstrings – and he only managed a further 13 games in three seasons before heading to Brunswick in the VFA.

Wally has always wondered what might have happened if he’d been able to stay at Collingwood. He loved the place, and retained such affection for the Pies (despite having been a Carlton supporter as a kid) that he served on the Board of the Past Players Association in the 2010s.

The recruiting wars with Richmond in the 1980s produced winners and losers. But nobody seemed to win from Wally Lovett going to Punt Road. If he’d only been able to stay at Victoria Park, we might just have had another 1980s cult figure on our hands.