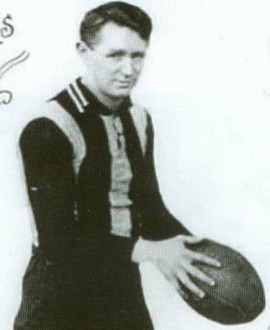 Few players in Collingwood’s history have caused such little grief to their teammates when it comes to finding a nickname as Timothy Walter Raleigh.

He was universally known as Walter – Wally to his mates – and before he’d even arrived at Collingwood was widely referred to as “Sir Walter”, or “Sir”, in honour of the famous English writer and explorer (and the man who helped popularise tobacco in Britain), Sir Walter Raleigh.

But while the easy nickname might have helped “Sir” settle in quickly at Victoria Park, the Collingwood selectors did him no such favours. He was playing at Fitzroy Juniors in 1913 when he was given his first outing in the last home-and-away game of 1913, acquitting himself well as an 18-year-old on the half-back flank against South Melbourne, “playing cool and effectively”. He was given one further game in 1914, against Geelong at Corio Oval, but missed the next week with a “bad cold” and didn’t reappear for the rest of the year.

He was reported to be in “champion form” during the 1915 pre-season and started off that year in fine style, managing four of the first six games and drawing praise for his fine defensive play. In one of those games a newspaper described him as “a promising addition to their already strong back line.” He was a fast-running defender who played mostly on the half-back flank or back pocket. He loved nothing more than bowling a few opponents over, and was the type of player who would let nothing come between him and the ball. He was utterly fearless, and a good man to have as a teammate.

But any hopes that Wally was about to hit his straps as a VFL footballer were dashed when he enlisted midway through the season, and before long he was in camp in Seymour, along with Paddy Rowan, ‘Doc’ Seddon and Jimmy Jackson. Wally served with the Western Frontier Force, and spent time in Egypt, France and England.

He returned to Australia in 1919, but the Pies were by that stage a strong combination on their way to a Premiership. His brother-in-law, Charlie Fisher, was captain of Carlton and Wally joined the Blues for the 1920 season. He soon showed he’d lost little through missing the best part of five seasons, and played 32 games in two seasons at Princes Park, including some outstanding finals performances. In 1922, Wally followed Fisher to Brunswick, and in 1925 – having been appointed playing coach at the start of the year – he led Brunswick to a VFA flag after a near-perfect season. Raleigh promptly retired, but was talked back into playing again at different times in each of the next four seasons – and even as late as 1933 when the club was broke and hard up for players.

According to the book A Fair and Honest Game, by Les Barnes and Laurie Cunningham, Raleigh was a driving force behind that 1925 flag. He was also a central figure in one of the most infamous incidents in VFA history, when he barred an umpire from entering the Brunswick rooms after a match as the umpire tried to inform the club he had reported one of their players (this followed weeks of disputes between the club and umpires). Raleigh and the reported player were suspended indefinitely by the VFA and the club, in turn, withdrew from the VFA in protest. The issue was eventually resolved but Raleigh stayed banned until late in 1927.

For most of his time at Brunswick, Raleigh was a wood and coal merchant. When that business declined he started up a home rubbish operation that survived until his death in 1960, aged 65. And it’s a fair bet that, right til the end, plenty of people still called him “Sir Walter”.