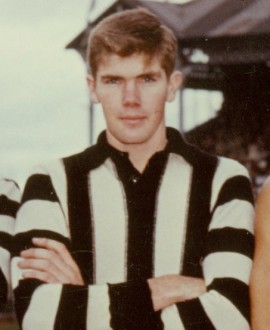 Few players have undertaken a longer journey, or shown more self-belief, to make it at Collingwood than Warren Roper.

Roper was a comparatively unknown junior player who had only played reserve eighteen football with West Perth when he decided to drive all the way to Melbourne and introduce himself to Collingwood in 1961. Despite being just 20 years of age he had a wonderful footballing physique even then – standing around 188cm tall and weighing around 83kg. He could leap too, had good hands, and even in his earliest outings showed a commanding understanding of the science of ruck play.

The Magpies could scarcely believe their luck. So they played him in one of the early ‘possibles v probables’ practice matches. “Young Roper from West Perth showed he has plenty of talent and played most intelligent football,” reported the club the following week. “He kicked the first two goals scored in the match, marked well and his clever handball was a delight to see.”

Roper signed with the Pies soon after. He went straight into the seconds, made his senior debut in Round 5 in the forward pocket against Fitzroy and followed up with four more senior games (and four goals) at the end of the year. He finished third in the reserves best and fairest that year. In less than 12 months Warren Roper had more than justified his brave decision to cross the country in pursuit of his footballing dream.

That was promising enough, but Collingwood officials could barely contain their excitement when he kicked six goals from full-forward against Geelong early in 1962. They were convinced they had a genuine star on their hands.

As things turned out, they almost did. Roper had all the tools: he was beautifully built for football, was a good mark and a lovely kick. He played forward mostly, but with stints on the ball, and then moved into defence. Wherever he played he looked for all the world like he was at home in VFL football from the very start, even though he had apparently been overwhelmed initially by the speed and ferocity of the game.

After three years he’d played 38 games and kicked 27 goals. He’d moved into defence during 1963, while still spending time in the ruck, and ended that year with the R T Rush trophy for second best and fairest. “He must be the best mark in present day League football,” wrote Footy Fan at the end of that year. “He has sticky fingers and marks in the tips of his hands. It amazes one how he holds onto them. He has done very well in the ruck this year too.”

He started the next season on fire, coming under close consideration for a spot in the Victorian team. But in Round 6 against Essendon in 1964 he injured his knee and was forced to miss the rest of the season

Knee injuries were potentially career-ending in those days, and many people wrote Warren off. But he returned to senior football in the fifth round of 1965, and his return was welcomed with jubilation by selectors and supporters. He strung together six games, and in the fifth of those – coincidentally against Essendon – he looked back to his best and helped inspire a big Magpie victory. But the very next week, against North Melbourne, fans were horrified to see him crumple to the ground and leave the field. He was forced to undergo his second cartilage operation within 12 months.

He ended up needing a third in 1966, forcing him to miss the whole season. He returned to play 10 reserves and six senior matches in 1967, an inspirational comeback that had all the football world cheering. But he wasn’t the same player – how could he be? – and he left the VFL at the end of that year. From there he took up a captain-coaching role with Coragulac in country Victoria for two years, and later spent a season with Northcote. He also played in Queensland and coached their state-of-origin team.

Warren Roper was on the cusp of stardom when he went down with his first knee injury in 1964. It’s hard not to think about the difference he could have made in that year’s Grand Final, or the nailbiter against the Saints two years later, or the overall career he might have gone on to enjoy. We were lucky he came to Collingwood in the first place, but desperately unlucky that he was taken from the VFL scene way too soon.