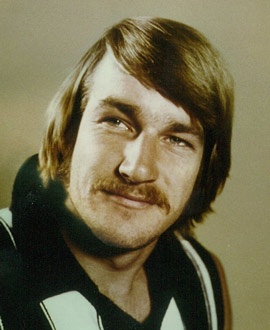 WHENEVER Wayne Gordon played football, he seemed to be so full of life.

He was energetic and athletic for his size (189cm), with a trademark high-stepping run, rated in the 1977 Grand Final Record as “one of the tallest and strongest and toughest wingmen playing today.” He stood out with his flowing blonde locks, and luxuriant moustache that seemed so fitting in the 1970s.

Gordon had a feisty on-field presence, not just in matches, but sometimes even in training sessions: Peter McKenna recalled that Gordon gave him “a bit of a whack” at training one night. “I gave him one back. That didn’t worry me. I liked the fact he was a real goer,” said McKenna. Gordon was a booming kick and capable of launching himself into the air, with a better-than-average leap leading to some memorable marks.

As a young footballer with Collingwood, he started as a fill-in full-forward before finding his home on the wing. Later, after he moved to Melbourne, the footballer known as ‘Flash’ Gordon (he actually had a photo shoot with actor Sam Jones who played ‘Flash Gordon’ in the 1980 movie) displayed his best form as a rugged defender.

Away from the field, he won the hearts and minds of supporters of all persuasions when he bravely fought Hodgkin’s disease and the struggles that came with that.

Gordon had been recruited to Collingwood from VFA club Preston in 1974 – the same year as fellow Preston recruit Ray Shaw. An opportunity presented itself when star forward Peter McKenna suffered a thigh injury late in the season. Coach Neil Mann brought Gordon into the side for the Round 17 clash with Melbourne at the MCG, after he kicked three goals in the reserves the previous week.

A photo from the Herald showed the debutant, wearing long sleeves and No.39, listening intently to advice in the rooms from former Collingwood champion forward Ron Todd.  The Herald detailed: “Full forward … and in your first league game. It’s not an easy job. But if Collingwood’s Wayne Gordon, 20, wasn’t sure how to tackle it today, he didn’t have to look too far for expert advice. Ron Todd, one of the Magpies – indeed football’s – greatest goalkickers was on hand for a tip.”

Gordon had nine disposals and kicked two behinds in the Magpies’ four-point win that day. He wouldn’t return to the seniors until Round 3 the following year – this time wearing the No.13 and playing at half-forward. He would play 11 games in 1975, with a clutch of five in a row between Round 13-17 showing the promise that was to come, but was overlooked for the finals.

Gordon played all but one match during one of the club’s most challenging seasons, the wooden-spoon year of 1976. But in 1977 it all came together: after missing the opening round he went on to play the next 24 in succession. By now he’d been moved to the wing, where his pace, long kicking and strong marking made him a valuable performer.  He had 10 or more disposals in every game, for a career-best total of 379, and scored one goal or more in 14 games that season.

During the finals it was said of him: “Wayne has beaten all comers this season, (he) has a streak of meanness about him, but he’s always trying to Collingwood’s advantage, has plenty of pace, can take a strong mark and isn’t lacking in shrewdness either.” He lowered his colours to Stan Alves in the drawn Grand Final but was much better in the replay, where he kicked two goals and also helped set up Phil Manassa’s famous run with a deft tap for Phil to run onto.

Injuries hindered him the following year. He managed only 10 games in 1978, with his 67th and last in black and white coming against South Melbourne in Round 15.

By the start of the next season Gordon was caught up in a big trade to Melbourne. The Magpies offloaded Phil Carman, along with Gordon and John Dellamarta in exchange for forward Ross Brewer and money. After overcoming a knee injury that restricted him to only three games in 1979, Gordon went on to play 20 games with the Demons the following year, mostly in defence.

But his world was rocked in the middle of the 1981 season when he was diagnosed with Hodgkin’s disease.

His father had died of cancer in his mid-40s. He played for three more games while dealing with the diagnosis, including his 100th VFL game, against Fitzroy in Round 12. Not even his teammates, or his mother, were aware of his condition at the time, until he felt more comfortable discussing his challenge.

He told the Herald’s Mike Sheahan: “The doctor (originally) had said if I was in the worst stage of the disease, I’d have three to seven years. That sort of set me back a bit. But virtually in the next few days we found it was curable and things had gotten better.

“When I was told I had Hodgkin’s, I said ‘I shouldn’t go out and buy any big books to read or what’? But that was just a cover up because I was packing it.”

The footy world rallied around him, and he never gave up hope of playing league football again, even if the reserves was as far as he could manage. He collapsed during a reserves game against Fitzroy at the Junction Oval in August 1983, believed to be caused by a heart problem.

A few weeks later everything seemed to be improving. He even attended that year’s VFL Grand Final between Hawthorn and Essendon with his Demon teammates. But tragically he collapsed and died when playing a social game of doubles tennis on September 29.

“The really sad thing is that he beat the cancer and then his heart went on him,” Melbourne administrator Dick Seddon said. “He demonstrated fantastic character qualities and was an inspiration to everyone.”

His Collingwood and Melbourne teammates mourned him. John Dellamarta said in a death notice: “We will never forget the good times we had together.” Gerald Betts’ death notice read: “Tired and weary you made no fuss/You tried so hard to stay with us/You suffered so much and told so few/You never deserved what you went through.”

Gordon was in between jobs when he died, with no life insurance or superannuation for his widow Jacqui and his 11-month-old son Nicholas. So the Demons and the Magpies joined forces to launch a fundraising appeal for Gordon’s family.

It was the least both clubs could do for a footballer who gave the game his all.