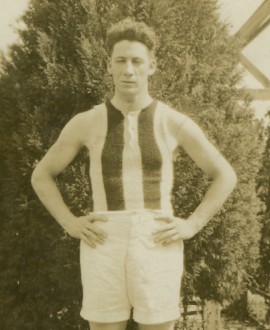 It was just a few words early in 1929, but the brief news item in the Sporting Globe said so much: “Sneazwell’s knee gave way in an intra-club game. He is not expected to play again for the year.”

And that was it. With those two sentences, the curtain effectively came down on what had been a promising football career for William Henry Sneazwell. His knee never repaired and, even years later, when he’d have a kick at Collingwood Past Players’ picnics, he’d hardly be able to walk the following day.

It was all so different when Sneazwell’s career started in 1926. A local lad who was born in Thornbury and attended Sacred Heart School in Preston, Sneazwell’s football with Thornbury CYMS first brought him to the attention of scouts from Carlton. When he decided he wanted to go to Collingwood instead, a tug-of-war ensued, with the Blues insisting he’d need a clearance from them first.

When he was eventually granted permission to switch camps, he settled in straight away. “I am happy at Collingwood – they are a bonza lot of fellows and every boy feels that the other man is his comrade”, he said.

The Sporting Globe reported after his debut as a 20-year-old that he had made “a very conspicuous beginning in big company”. He was fast, courageous and had plenty of stamina. The Globe described him as “tall, with jet black hair and a boy of great keenness.”

At 180cm and 76 kg, he’d played mostly in the centre in his junior career, but spent his VFL football in defence or as a following partner for Syd Coventry.

“He is a lad of fair physique,” wrote the Globe, “and he has grit. He can run fairly fast, and has plenty of stamina. His chief defect has been his awkwardness. But under (Jock) McHale’s tuition, however, he has made great strides,
and is learning to turn quickly and get into position for the coming ball.”

Sneazwell played only four games in that first season but the Magpies had seen enough to be highly optimistic about his future and he was earmarked for plenty of games.

He faced further challenges in 1927 when his parents moved to Healesville: he knew that if he went with them it would seriously hamper his ability to get to training, and his career seemed in jeopardy. So he took the courageous decision to board in the city rather than move with them.

Sadly, he wasn’t rewarded with good fortune for his commitment to the game. A succession of thigh injuries limited him to 10 games in 1927, and he was still fighting to become a regular senior player when his knee injury intervened in 1928. He tried to come back via the practice matches of 1929 but the knee gave way again, this time for good.

When Bill married in 1928, his old mate from Thornbury CYMS, Frank Murphy, was his best man. Tragically, his wife died during childbirth some time later, and Sneazwell was deeply affected by the loss. He married again 13 years later, and one of his children, Tony, was an Australian high-jump champion who competed at both the 1964 and 1968 Olympics.

After his career ended, Bill remained in the thick of things at Victoria Park. He’d been involved with the Past Players’ Association from its early days, and served as its president in the 1960s. He was secretary of the second 18 in the Premiership year of 1958 and even stood for the board. Collingwood was a big part of his life.

When he died from lymphoma in 1967, he was missed not just as a former player but also for his great contribution to the club in the years after he was so cruelly forced from the game.