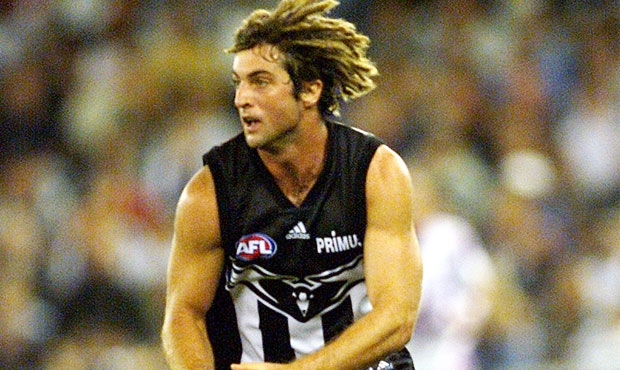 Shane O'Bree showcases Collingwood's pre-season jumper circa 2001-2004 in the third round of the 2001 Ansett Cup against North Melbourne at Colonial Stadium.

The pre-season competition has been in a state of flux ever since its introduction in 1956, when it was known as the night series. It was played as a post-season competition, and originally comprised the eight teams that missed the VFL finals series.

The competition ended in 1971, but returned in 1977 as a midweek knock-out series played under lights at VFL Park during the pre-season and the home and away season. Further differentiating it from the VFL premiership season, the night series included all SANFL and WAFL teams as well as sides from NSW, ACT, Queensland and Tasmania.

In 1988, the night series evolved into the pre-season competition. The complexion of the tournament has changed over time – for example, the 2000-2003 competitions were conducted via a round-robin format of four teams in each pool. The concept was short lived, although it was partially revived in 2011 when pools of three teams played two 20-minute halves against each other on the one day.

Now, in 2014, the pre-season competition has again undergone a major overhaul, with the abolition of the NAB Cup format which saw the two best performed teams meet in the Grand Final a fortnight prior to the home and away season. Instead, each team will play two matches under the NAB Challenge banner before playing one final practice match ahead of the home and away season.

Collingwood’s record in the competition is not overly successful. It won its first night series flag in 1979 against Hawthorn at VFL Park, the club’s first senior silverware since the 1958 premiership.

It featured in three Grand Final losses in the ensuing 30 years. The most controversial was undoubtedly the ‘loss’ to North Melbourne in 1980.

The VFL Park siren sounded with Collingwood ahead, only for the field umpire not to recognise it. Play went on and North’s Kerry Good marked within goal kicking range. The umpire then acknowledged the siren a second time, and with fans streaming onto the ground, Good kicked truly to hand the Kangaroos the night premiership with a three point win.

The Pies reached the 2003 decider after thumping Carlton, Hawthorn and Geelong, but were no match for Adelaide who coasted to a 31-point victory.

Six years later the Magpies again played off for the pre-season flag but were belted by eventual day premier Geelong (76-points).

The Magpies prevailed in the first week of the 2005 Wizard Cup when they overcame Richmond by seven points, courtesy of a last-minute nine-point goal from Andrew Williams, deep on the half forward flank.

In 2010, they played an unusually highly charged first round match against St Kilda. The added intensity was born from St Kilda hero Luke Ball’s controversial crossing to Collingwood only months earlier. Ball managed a goal and was named in the side’s best, but a late goal to an unmarked Adam Schneider gifted the Saints a one-point win.

In 2011 Collingwood was the first team since Essendon, in 1993/ 94, to win a pre-season premiership after winning the previous years’ Grand Final.

The Magpies 22-point victory over Essendon was played in front of 45,304 at Docklands Stadium.