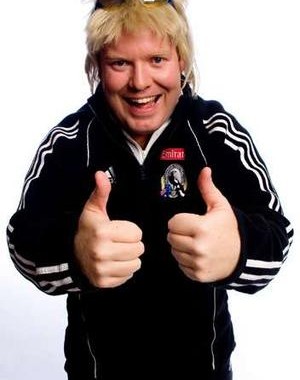 Bryan Keith Strauchan was born in Horsham, Victoria to Roy and Soy Bean Strauchan in 1983. He was drafted by the Collingwood Football Club in 2004 and rose to immediate prominence by immediately declaring himself “a legend of the game”.

If stats don’t lie then Strauchanie’s self professed star status would be questionable but Strauchanie assures us that stats do lie and they sometimes cheat too.

The main criticism aimed at Strauchanie is that he has never played an AFL game for Collingwood despite being on the list until 2009 when he was dumped before immediately quitting. He battled injury, weight issues and scandals which involved dating the coach’s daughter, throwing a kebab at a bouncer and prank calling various genuine legends of the game.

He once described himself as “part Fev, part Buddy, all Strauchan” which nobody knew quite how to take.

Despite the lack of game time the Australian public has taken a shine to Strauchanie. He was awarded the AFL Personality of the Year in 2005 (the first non player to receive it), he drove in the Celebrity Grand Prix and won Best On Ground in the 2009 EJ Whitten Legends Game when he got Victoria over the line by kicking three goals against the All Stars.

He also played for Port Power against the Crows in the 2008 Slowdown in which he snagged two goals and got in the best players. He won Best on Ground at the Shane Warne Charity Cricket match in 2008 at the MCG.

He even presented at both the Logies and the Brownlow and has released both a DVD named Pure BS and a book titled Bryan Strauchan: My Story.

Over the years, Strauchan has been criticised for taking more pride in attracting sponsors than playing football. He courted and won a sponsorship from Mars which he took extremely seriously. The partnership between Strauchanie and Mars won countless advertising prizes including a Cannes Lions (Gold) in Cannes for Integration as well as the Award for Best Use of Content at the Festival of Media in Valencia, Spain. Strauchanie considers these “his Brownlow’s”.
Strauchanie still believes he will return to playing top level AFL football at some point and takes encouragement from J Pod and Michael Barlow.

The above account is taken word for word from strauchanie.com.au