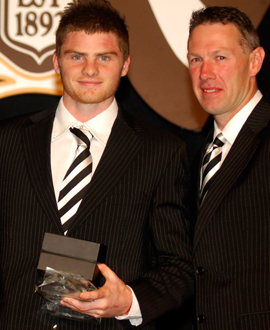 Heath Shaw with Gavin Brown at the 2006 Copeland Trophy night.

In 1990, coach Leigh Matthews initiated the ‘Wrecker Award’ at Collingwood for the player who was engaged in the most tackles and ‘one-percenters’ over the course of the season.

That award fell into abeyance after 1999, but found its natural replacement in 2005 when the club decided to make an award for the player with the best desire indicators for the year.

This award was named after former skipper, premiership player and dual Copeland Trophy winner Gavin Brown – one of the gutsiest players ever to wear the black and white jumper.

Then, in 2016, the award was presented to the player who best demonstrated the team values throughout the season.

Players had the capacity to allocate votes on a 3-2-1 basis (as per the Brownlow Medal system) after each game based on this criteria. The player who polled the most votes received the award.

Because of their similarities, the two awards are shown together here.