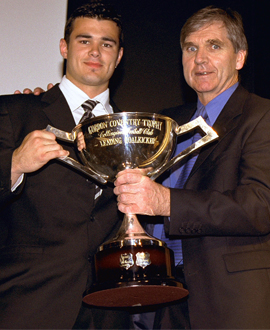 Collingwood has been associated with great goalkickers from its very first years. Indeed, Collingwood players won the VFL/AFL goalkicking title 22 times in the competition’s first 43 seasons.

Even among so many great sharpshooters, one man stands above the rest: Gordon Coventry was the first man to ever kick 100 in a season, and his eventual career tally of 1299 goals stood for more than 60 years.

Today, the Gordon Coventry Award is presented to Collingwood’s leading goalkicker for the season.