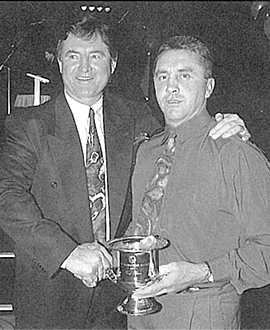 Tony Shaw accepts the Most Courageous award from board member Wayne Richardson in 1994.

This award was first presented as a one-off in 1978, to acknowledge Ronnie Wearmouth’s gutsy performance in that year’s preliminary final.

It was reintroduced several years later, and re-named the Jock McHale Trophy.

The list of winners reflects some of the bravest players to ever pull on a Collingwood jumper, with Tony Shaw and Gavin Brown each winning it four times.

The award ended in 1999, and the Jock McHale Trophy became attached to the player finishing fourth in the best and fairest count.