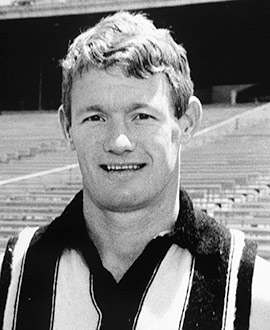 Like many club awards, this one appeared out of nowhere in 1964 when it was given to Kevin Rose (he won a ‘gold wristlet watch’).

It reappeared a few years later and stayed as a regular feature until the early 1980s, under the name of the J.W. Styles Trophy.

The concept of ‘most determined’ was never clearly outlined, but given that Des Tuddenham and Phil Manassa are the only two players to have won it twice – and that other winners include guys like Ted Potter, Stan Magro and Ray Byrne – it’s pretty clear what attributes it rewarded.

The award ended in 1981, and seems to have been ‘superceded’ the next year by the introduction of the Most Courageous Player trophy.