Services to the Club 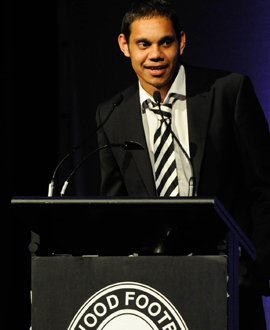 The Phonse Kyne Award is named in the honour of the two-time premiership player and premiership coach and is awarded to those who serve the club both on and off the field.

Phonse Kyne played 245 games for the mighty Magpies between 1934 and 1950, mainly as a forward-cum-ruckman.

Recruited from St Kevin’s College Toorak, Kyne is one of only four players (along with Bob Rose, Nathan Buckley and Dane Swan) to win three consecutive E.W. Copeland Trophies (secured between 1946 and 1948).

Kyne’s motivational speeches on Grand Final Day 1958 remain a prominent part of Collingwood folklore, as he urged his players to preserve the club’s famous record of four premierships in a row against the all-conquering Melbourne.

The Phonse Kyne Award is received by a player or official who has served the Collingwood Football Club with the highest of distinction on or off the field. In recent years, loyal staff members have received this prestigious award.