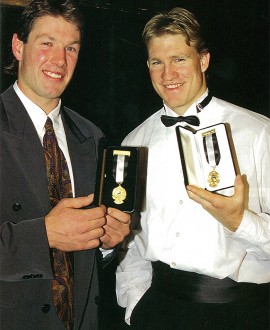 Gavin Brown and Nathan Buckley were joint winners of the E. W. Copeland Trophy in 1994.

The Collingwood Football Club has a long history of rewarding its players for outstanding achievements, and long service.

But one thing that set the club apart in its early days was its focus on rewarding those who regularly attended training.

The very first awards presented by the club came in 1896, and consisted of a series of one-guinea awards given to the three players who turned up at training every night. These training awards became a staple of Collingwood end-of-season nights until he 1950s, often extending to 10 or more players sharing the spoils. For players who were doing it tough, a little extra cash was priceless – especially in the days before players were paid to play.

The 1896 season also saw the club present its first Five-Year Service certificates, as well as gold medals to the Premiership players.

But what started out as training prizes soon spread into other areas. In 1897 a hat was given to the best player each week, and a gold medal for ‘most consistent player’ was given to Charlie Pannam Snr in 1899.

Those early years saw an eclectic mixture of rewards. In addition to cash or medals there were things like a silvered hot water kettle, a clock, a pipe, a suit of clothes from Treadway & Co, a pair of boots, kit bags and much more. By the 1970s that had broadened to include golf clubs, steak knives, coffee tables – but watches and silver coffee services were still popular.

The biggest change came in 1927, when the club decided to officially honour the player chosen as its best of the season with the awarding of what became known as the Copeland Trophy, named after long-serving secretary Ern Copeland.

Awards for runner-up and third place in the best-and-fairest followed soon afterwards, as did a number of awards that appeared irregularly, such as best first year player, best player in finals, most courageous player, best country recruit and so on.

Today’s batch of awards is well defined, but history shows that some trophies come and go over time. One thing that never changes, though, is the pride the players feel when they stand up on stage to receive an honour from their club.

To check out the history of the club’s most regularly presented awards, just click on the relevant links below.