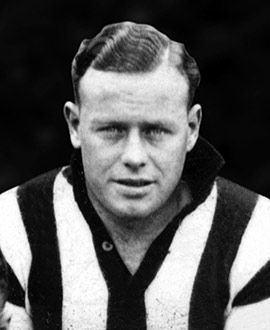 The business end of the 1939 VFL season was a busy one for Collingwood’s classy centreman Marcus Whelan.

Not only were the Magpies heading towards a fifth successive Grand Final appearance, the one-time reluctant footballer from Darley, near Bacchus Marsh had enjoyed yet another outstanding season.

Whelan believed his individual performances the previous year – in 1938 – had been better, but the umpires and the Collingwood selectors had begged to differ.

He was adjudged as the 1939 Copeland Trophy winner, ending a run of back-to-back wins from Des Fothergill, and when the VFL sat down to count the votes, he would be announced as the Brownlow Medal winner.

Whelan, 25, polled 23 votes from his 17 games played that season, to win the award by two votes from Footscray’s Harry Hickey, with Essendon’s Dick Reynolds a further vote back in third place.

It led the Argus’ football writer Percy Taylor to say: “Marcus Whelan takes his place among those champions whose names appear as winner of the Brownlow Medal, the ‘Victoria Cross’ of Victorian football. Not only Collingwood supporters, but followers of every club have no quarrel with the choice, rather it is applauded everywhere.”

The newspaper was on hand at the Carlton Brewery the following morning as a photographer captured two lasting images of the occasion – the first had Whelan shaking hands with his coach, Jock McHale, who more than likely got him the job, and the second with a group of brewery employees revelling in the moment.
At training at Victoria Park that night, it was said that he was also “heartily congratulated by his teammates and officials … Whelan, who is one of the quietest members of the team, and an excellent club man, had had a busy day because good wishes had been pouring in.”

Whelan had started slowly in his career with Collingwood after being recruited as a young man of undoubted talent by club secretary Frank Wraith earlier that decade.

But he had felt the pangs of homesickness for a time. But when champion centreman Jack Beveridge left the Magpies at the end of the 1934 season, it paved the way for the highly-skilled Whelan to be allocated the pivot. And he would not look back, playing in the 1935 and ’36 flags, and helping to keep Collingwood as one of the most competitive teams of the late 1930s.

Jack Dyer, who finished fourth to Whelan in the 1939 Brownlow Medal, always maintained the Collingwood player was “the best centreman I’ve seen”, while Old Boy, of the Argus, called him “a modern day champion.”

Whelan jointly led the Brownlow Medal count after the allocation of the one votes, and managed to hold on to win the count after polling in nine of his 17 games.

And his star-status was on show soon after winning the award, as he fronted an advertisement for Bonox, saying: “The way to keep fit for football is to drink plenty of Bonox … that’s the stuff to put the beef into you.”

Straight after winning the Brownlow, one newspaper stated that “the omens are good for Collingwood” if history was to be any judge.

The other three Magpie players to have polled the most (or equal most) votes in the Brownlow Medal – Syd Coventry (1927), Albert Collier (1929) and Harry Collier (1930) – had done so in premiership-winning seasons.

But, sadly, Collingwood was no match for Melbourne in that 1939 Grand Final, which took place just a month after war had been declared, a war that would cost Whelan three seasons of his career.

Still, the Magpies had every right to be proud of their centreman for his outstanding season, and his contribution to the game.

In the club’s annual report, released early the following season, they paid a special tribute to the man who became the only Brownlow Medal winner to wear the No.28 jumper in his successful season.

It read: “Words, no matter how eulogistic, would be extravagant in recording an outstanding achievement of Marcus Whelan in winning the title of Victoria’s best and fairest layer for 1939, and with it the Brownlow Medal., the highest distinction award in Australian Rules Football. This recognition was well earned by brilliantly clever football, coupled with the highest possible degree of sportsmanship.

“We all admire his brilliant football and shining example of sportsmanship displayed by him at all times.”

And to cap it off, a month after winning football’s highest honour, the newly crowned Brownlow medallist was married to Marjorie Dummett, who also came from a famous football family.