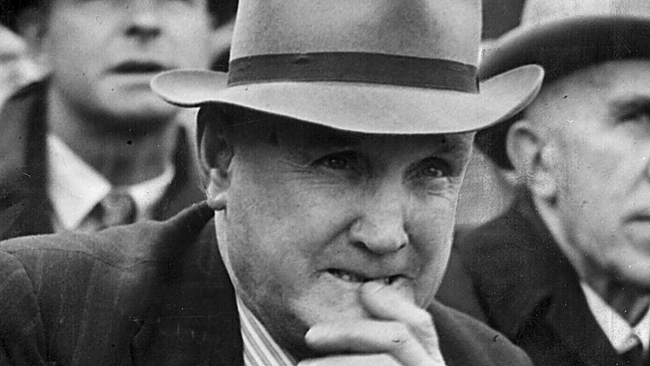 EACH year the AFL’s premiership coach receives a medal named in honour of the man who arguably made the single greatest contribution to a football club – and to the role of the coach – in the history of the game.

It is the Jock McHale Medal, and it is fitting the man considered “the Prince of Coaches” had his name posthumously ascribed to the medal given to Grand Final winning coaches since 2001 – almost 50 years after his death.

James Francis ‘Jock’ McHale was a coaching colossus, not only of Collingwood, but also as a man who helped to pioneer the role and then define it across an extraordinary 38 seasons and 714 matches.

And his record of eight premierships as a coach of the Magpies – one of them as playing coach and seven as non-playing coach – only serves to highlight the appropriate decision in naming the premiership coach’s medal after him.

He wasn’t the first coach. He wasn’t even Collingwood’s first coach. But from the time he took charge of the role in 1912 – just before the Titanic’s maiden voyage – until his departure just before the 1950 season, the “Collingwood six-footer” (he was actually 180cm) towered over the game in terms of his influence and his impact.

His tenure stretched across two World Wars, a crippling depression and through the halcyon years of Collingwood, most famously with his association with the only team to win four premierships in succession – the famed ‘Machine’.

It was a term that McHale did not like. He never saw his most successful team – or any of them, for that matter – as a mechanical, rigid entity. He took offence to that suggestion, saying that his sides were adaptable, innovative and flexible.

He would say many years after his 1927-30 successes: “The funny thing is that, as a non-playing coach, I did not set out with any specific intention of building a football machine. I never liked the term, because it suggested the side was a combination which worked to a rigid plan, and could not think. And there is one quality we demand at Collingwood; it is the quick-thinking player with a dash of imagination.”

McHale, the coach, towers over McHale, the player, but his record on the field should never be underestimated.

He played 261 games in black and white (one more than Nathan Buckley) from 1903-1920 as a hard-working centre-man and sometime defender. He won distinction for his durability, professionalism, loyalty and commitment.
All of those qualities he would later demand from his players.

McHale would face a baptism of fire as playing coach in his first season (1912) with the Magpies missing the finals for the first time in the VFL. But he would stick to the same course and rarely deviate from the qualities he insisted upon.

Within five years, he would win his first premiership as coach, with Collingwood defeating Fitzroy in the 1917 Grand Final, and he would add another flag, this time as a non-playing coach, when the club defeated South Melbourne in 1919.

McHale demanded his players show the same sort of discipline he had shown. He helped to prepare his players physically for the challenges and insisted that the team was far more important than the individual, which meant all players at Collingwood – even the best players and the coach – received the same payments.

It was one of the pillars on which he believed great football clubs could be built on and that egalitarianism and team-first philosophy was the foundation for the success that Collingwood would have during his exceptionally long reign.
Tellingly, he would say: “I had no time for a side built up around three or four star players. Give me a fit bunch of men with a good general level of ability.”

Importantly, he would use his word and his tactics to help shape the sport in the first fifty years of the 20th Century, becoming one of the first systematic coaches, favouring corridor football, and carrying on from the earlier Collingwood traditions of the stab-kick, he would encourage fast, slick play the middle of the ground.

All of those long-held beliefs culminated in an unprecedented period of success. Collingwood won four succession premierships – 1927, 1928, 1929 and 1930 – something that no other VFL-AFL club has achieved before or since.

He would barely miss a training session and would famously miss only one match in his 38 seasons in charge – the 1930 Grand Final, when he was confined to bed in his Brunswick St. home after becoming ill.

The AFL still credits McHale as being the coach that day, given how much he planned for the game from his sick bed throughout the week leading up to the clash with Geelong.

He could be a tough, uncompromising soul. But he was a remarkable judge of a man’s fitness and it failed him on only a few occasions.

McHale was not the sort of man who encouraged teaching his charges individual skills. That was generally left to the man who coached the Collingwood district (reserves) side, Hugh Thomas, who had a cool relationship with the senior coach.

More premierships came when he remodelled the ‘Machine’, adding to the club’s already bulging stocks of good players with a host of fresh new talent, mostly from the streets of the suburb that they would come to represent.

But following those 1935-36 flags, Collingwood would play in three losing Grand Finals leading into the start of the Second World War.

Sadly, the 1940s would prove to be the Magpies’ most miserable decade, and it would increase the pressure on the ageing McHale, who was intent on carrying on his long-standing traditions that had been ingrained into the football club.

It would be the only decade in the club’s history that it would not make a Grand Final, which can be attributed largely to the absence of so many of the club’s best players on war service.

Yet some believed McHale’s methods, which had been so successful for so long, had become antiquated, and others pointed to a less than satisfactory training base for the team’s fade-outs late in some important matches.

His last game, though no one knew it at the time, came in the 1949 first semi-final against Essendon, which ended in an 82-point loss.

McHale would be re-appointed in 1950, though he never intended to coach that season. Just before the start of the season, he announced he was retiring from the role that had been his – unchallenged – since early 1912.

Sadly, he would be dead three years later, just a week after Collingwood had won the 1953 premiership.

It prompted one of his former players, Bruce Andrew, to write in the Sporting Globe: “’The Prince of Coaches, as he was so often called is gone, but the spirit he imbued into his team is still there; as strong, if not stronger than ever. While the ‘arms’ and ‘legs’ of his team have been replaced, the ‘body’ – that fanatical team spirit – has remained a foundation on which he built his football structure.”