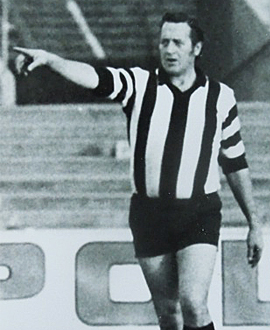 FOOTBALL is so often about timing, and for Murray Weideman, his timing as a player was impeccable.

He played in a premiership in his first senior season – in 1953 – and was the club’s acting captain in another flag – 1958 – on his way to becoming one of Collingwood’s favourite sons.

As a coach, his timing would be at the complete opposite end of the spectrum, and it would end with the Magpies’ first wooden spoon.

Weideman had coached West Adelaide for four seasons (1968-1971), taking them to a preliminary final in his second year, having earlier coached in Albury.

It seemed almost a natural fit that the Magpie great would one down return home to Victoria Park to coach, and that opportunity presented itself at the end of the 1974 season.

But the seeds of concern were there almost from the outset, particularly with relations between the new coach and the new president Ern Clarke being frosty almost from the start.

In time, the waring between Clarke and Weideman would create a massive divide at the football club, and if you add that in with strong criticism of the coach’s laid-back, casual approach, it was almost a recipe for trouble.

Weideman had come across from Adelaide in the same year that Phil Carman had. And Carman took the game by storm in his first season, with a few breathtaking performances, including the day he kicked 11 goals in white boots in a clash with St Kilda.

Collingwood had a reasonable season in Weideman’s first year as coach. They won 13 of 22 home-and-away games which left them in fifth place, and squaring off against Richmond in elimination final.

But the Tigers held on against a fast-finishing Collingwood, who had recovered from a 32-point half-time deficit to lose by only four points at the end.

The 1975 season had ended with a strong, positive performance, but the start of 1976 was a serious concern, with Weideman and Carman signing a statement early that they would quit if Clarke remained.

The statement was withdrawn before it got to Clarke.

Yet that didn’t stop the tension. Clarke stoked the fire by bringing Des Tuddenham back to Collingwood against Weidman’s wishes.

There were petty jealousies and bickering among the group, with Carman being part of the fuel that stoked the fire.

Carman admitted later that the place was out of control and the one-time fitness fanatic almost gave up caring. He would say: “I just couldn’t be bothered; the administration wasn’t stable and they’d just lost me.”

Through it all, Weideman was criticised for failing to instil discipline into his players, which he later said was unfair: “I was close to the players, very close, but I felt that being with them in that way they respect you and will always give you their best.”

What he would concede was that his approach to the game was too linked to the 1950s, and might not have had that modern feel to it.

Collingwood lost its first three games of 1976, by which time it had dropped the Richardson brothers (Wayne and Max) for the first time in their careers.

Wayne criticised the club and was suspended; Max refused to play in the reserves that day, but both would come back into the fold.

Losing became a habit, and the coach and the president were at each other’s throats regardless of the results.

The issue came to a head when Weideman issued a public statement, saying he could no longer continue to coach the club if Clarke remained.

Weideman said: “I will not coach Collingwood until Ern Clarke resigns as president … it’s either him or me. I cannot work under this man again.”

“Even if I lose my job, which I am sure I will, at least I’ve let the players, members and supporters know what is happening at Collingwood under this president.”

The pair were forcibly brought together to make a temporary truce for the sake of the club, though Clarke would eventually resign. And Weideman’s time in the job was also coming to an end.

A stretch of eight successive losses towards the end of the season had them on the bottom of the ladder before a win over Essendon in Round 21 restored some hope.

The Magpies had to beat Melbourne in the last round to have any hope of staving off the club’s first wooden spoon – and they also had to hope that Fitzroy would lose to Essendon.

The signs were positive early as Weideman’s team led narrowly at the first two changes. But an eight-goal-to-one term for the Demons almost put the game beyond doubt by three-quarter-time.

And despite a strong last term – seven goals to three – it was not enough to overhaul the Demons, with the 15-point loss ensuring Collingwood would finish last for the first time in its long and proud history.

Six wins from 22 games was the return from a bitter and divisive year. That would be Weideman’s last game as Collingwood coach, with his 19 wins from 49 games a disappointing postscript to what had been such a successful playing career.