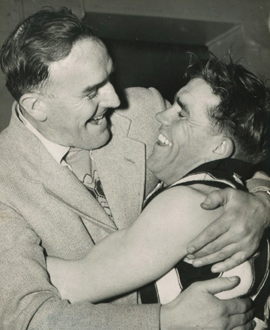 To say that Phonse Kyne had big shoes to fill when he took over the Collingwood coaching position in 1950 would be a massive understatement.

For a start, he was replacing the King of Coaches, Jock McHale. It had been a staggering 38 years – and a whopping 714 games – since McHale took the reins, and the majority of fans knew no other man in charge. Jock had also delivered eight premierships, almost continual finals appearances and had established the club as the powerhouse of the VFL.

That’s a mighty hard act to follow, in any circumstances.

But to make things even harder, Kyne only took over the role just weeks before the start of the season – and then only after a tumultuous few weeks that split the club and caused some serious bloodletting at board level.

The catalyst for the change was the 1940s, which proved to be an unusually barren decade for a club accustomed to success. After five successive grand final appearances to end the 1930s, the Pies weren’t in action on the last day of any season during the 1940s. There were several unsuccessful preliminary finals, but as the decade grew to a close there was a growing feeling that the mighty Jock’s time might be up.

In the end, though, McHale didn’t decide to retire until April in 1950 – just weeks before the season – which threw succession plans into a small amount of disorder. Still, most observers were sure the role would go to Kyne: he was the current club captain, had won three of the past four Copelands, was widely acknowledged as a fine leader and was nearing the end of his career. It seemed logical and easy.

But what most didn’t know was that some key members of the club’s committee had virtually promised the job years before to another former player, reserves coach Bervin Woods. The initial vote was tied, and the casting vote of President Harry Curtis went Woods’ way. Cue pandemonium.

Woods was a solid, loyal servant, but was no match for Kyne in the popularity stakes. So there was immediate uproar among supporters when the decision was announced, and within hours a special general meeting had been called to protest the decision. When Kyne appeared at a practice match the following Saturday, he was mobbed and cheered by thousands of fans and chaired to the dressing rooms. Woods and his supporters were booed and heckled.

In the face of such overwhelming opposition, Woods could do little else but resign. Kyne was belatedly appointed and some sanity was eventually restored to Victoria Park – but only after Woods’ supporters on the committee, which included great Magpie names like Bob Rush and Harry Curtis, were cast out at the special meeting a few weeks later.

It’s difficult to imagine a more unsettled set of circumstances for a new coach to endure. But Kyne rose above it all with the calm determination that would be a hallmark of his coaching. There was a setback in his first year, with the team dropping outside the top four and finishing seventh. But after that it was all steady progression – beaten preliminary finalists in 1951, runners-up in 1952 and a flag in 1953. In his first 11 seasons as coach he would manage six grand finals and two premierships.

His approach was, in many ways, similar to that which had worked so well, for so long, for Jock McHale – although he wasn’t as fearsome as Jock. His love for the club was just an intense, as was his devotion to the task, and he openly based his methods on those of the legend who had preceded him.

He was passionate, loyal and a players’ man, respected by all those who played under him. He did not believe in openly berating his players, but they were never left in any doubts about his feelings. “If Phonse had something to say – and he had plenty to say on occasions – he drew the player aside and gave it to him man-to-man,” Lou Richards once said.

As a player he’d long been regarded as an astute reader of the game, and that served him in good stead as a coach. His leadership skills also came to the fore, and he had an extraordinary ability to inspire his charges. Nowhere was this more evident than on grand final day in 1958.

This was Phonse Kyne’s finest moment as Collingwood coach – the day the rank outsiders pulled off one of football’s greatest boilovers to upset the seemingly invincible Demons, and preserve the club’s cherished four-in-a-row record. His tactics, especially tagging Melbourne star Ron Barassi and physically harassing other Demons off their game, were stunningly successful. And his speech has passed into football folklore as one of the most inspirational of all time.

“Today I want you to bleed for Collingwood,” he told his players. “I will be out there every second of the game. I’ll be feeling every bump, every mark, every kick. We’ll be doing this together. If you get knocked over, I want you to crawl on your hands and knees after the ball. Kick it off the ground, push it forward. I want you to go for the ball with every bit of might in your body. There will be times when you’re exhausted, when you can hardly breathe. That is when I want you to go harder – as hard and harder than any Collingwood player before you.”

Less inspirational, but no less memorable, were his words to his acting captain, Murray Weideman, at half-time after his team had produced a second quarter turnaround to lead by two points. “I don’t know what you’re doing,” he told some of his boys, “but keep doing it!”

They did, and the Pies pulled off what still ranks as the club’s greatest ever premiership.

Kyne continued as coach after 1958, of course, but the team never quite regained the magic touch. They dropped to third in 1959, returned for a grand final thumping in 1960, then missed finals for the next three years. The last of those was a particularly testy season, with the relationship between players and coaches undermined by their respective involvement in different sides of an ugly election campaign early in 1963. There were even suggestions that Kyne and his captain, Murray Weideman, barely spoke throughout the year. By August, Kyne could see the writing on the wall: he knew that Bobby Rose was waiting in the wings, and announced he would resign at the end of the 1963 season.

Phonse Kyne was a champion player who turned into a highly successful, dual-premiership coach. He was universally admired and respected, not just at Collingwood but also throughout football. He is rightly regarded as one of the great figures in Collingwood history.