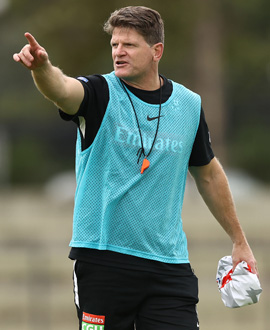 Gigs in footy don’t get much tougher than an assistant taking over the senior coaching position mid-season, after the senior coach has been sacked or otherwise moved on. With a few notable exceptions they’re almost always short-term jobs and they rarely lead to the kind of long-term position the coach would love to have.

It’s only happened three times in Collingwood history: in 1908 when Bill Strickland took over from Ted Rowell, in 1982 when Mick Erwin took over from Tom Hafey, and in 2021 when Robert Harvey took over from Nathan Buckley. And it’s no coincidence that Harvey and Erwin hold the two lowest winning percentages of any Magpie coaches.

Notwithstanding that, Harvs did a terrific job in difficult circumstances in the latter half of 2021. And it speaks volumes for his standing in the game that it’s exactlywhat the club expected he would do.

Robert Harvey is, of course, one of the greatest players ever to have played the game – and arguably, along with Buckley himself, the best player to have filled the role of an assistant coach at Collingwood. He played 383 games in 21 seasons for St Kilda, won back-to-back Brownlow Medals in 1997 and 1998, four St Kilda best-and-fairests and eight all-Australians. He retired from playing in 2008.

Harvey joined Collingwood as midfield coach for season 2012. He continued in this role in 2013, and won the AFL Coaches Association’s Assistant Coach of the Year award for his efforts. In 2014 he was elevated to the role of senior assistant coach, and three years later assumed control of the team’s backline. He returned to the familiar role as midfield and transition coach in 2018.

In short, he’d undertaken as good a grounding as you could get. So he was well prepared to take over when Nathan Buckley left after the team endured a disappointing start to the 2021 season.

Harvey had established great working relationships with many of the players during his years at the club, and these stood him in good stead once he took on the top job. He continued to play the kids as the club looked to rebuild, and also produced significant improvements to the team’s style of play, which had been roundly criticised earlier in the year. He got the team to play more direct and aggressive football, with much greater use of the corridor and a far greater emphasis on rapid ball movement.

The results were pleasing to the eye, and in some cases the scoreboard. A famous come-from-behind win over Richmond at the MCG was the undoubted highlight of his tenure, and a great win over the Eagles was also impressive. But they were the only wins, and too many of the team’s previous problems remained for him to seriously turn things around.

Many players spoke openly of their affection for Harvs, and there were whispers that some wanted him to be given the job permanently. But in the end he was overlooked, just as he had been at St Kilda in 2011, and one of football’s nicest guys – and most highly regarded assistant coaches – was left to once again continue his career elsewhere. But he’ll always be loved at Collingwood for his decade of service – and for stepping up when the club needed him most.