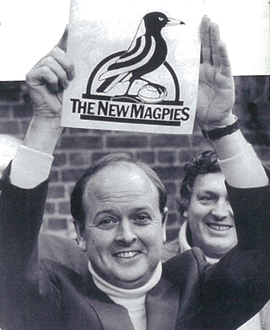 In 1982, media identity Ranald Macdonald pushed forward the campaign of ‘the New Magpies’, a group that wanted to move Collingwood into the modern age of football, and implement one of the most expensive and widespread recruiting campaigns in club history.

Macdonald had the backing of several players including Len Thompson, Terry Waters and Brian McKenzie.

Macdonald’s ticket ran over the current president at the time, John Hickey, during what was a dismal 1982 on-field season.

The first act of ‘the New Magpies’ was to appoint the club’s first coach to have never played in the VFL, South Australian John Cahill.

The club also embarked on a financially damaging recruiting campaign, desperate to rid the club of its premiership drought.  They even took a line – “Oh, the premiership’s a cakewalk” – out of the club theme song.

The club made finals in the second year under Macdonald’s reign, but the 1984 season saw Collingwood lose to Essendon by 133 points in the preliminary final.

In 1986, three and a half years after taking over the presidency, Macdonald resigned, leaving the club on the brink of bankruptcy and extinction.

The club was in debt to almost $3 million, the general manager Peter Bahen was sacked, and players were asked to take a 20 per cent pay cut.

Allan McAlister took charge of the presidency after Macdonald’s resignation and helped steer the club back to good health.