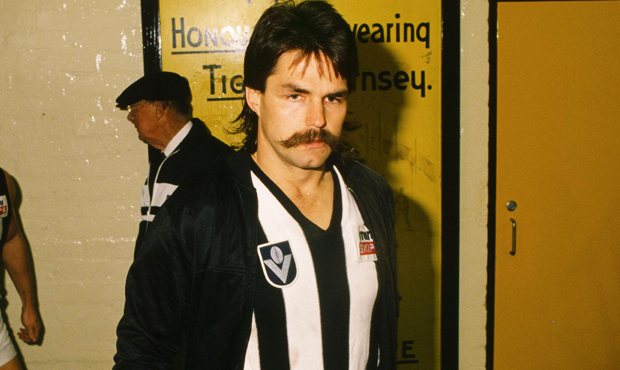 David Cloke was one of several players to swap a yellow sash for Black and White stripes during the 1980s.

There is a delicate irony about one of the many donors pledging money to Richmond in 1990 during its Save Our Skins campaign, designed to save the club from extinction.

That donor was the Collingwood Football Club.

If someone had suggested that might happen six or seven years earlier, you would scarcely have had anyone believe it.

For during a period through the early to mid-1980s, Collingwood and Richmond waged one of the most bitter and personal recruiting wars ever seen in football.

Perhaps it was the ‘Greed is Good’ theory that permeated the decade, or simply the combative mode of sport as it was back then.

Adversaries and foes were everywhere you looked.

And these two old football rivals developed a raw, new chapter in their football histories.

The enmity between the Magpies and the Tigers had a Cold War kind of feel to it. It wasn’t quite the USA versus USSR – at least no one had their fingers on the red button – but the hatred was as intense as footy could be.

Almost at the same time as Frankie Goes To Hollywood sang “Two Tribes” in 1984, the two footy tribes were doing everything on and off the field to hurt and hinder each other.

In the end, the cost to both clubs would prove immense, and the pain was almost immeasurable.

The poaching wars, the transfer fee nightmares involving a host of players who switched the colours of both side, and the cost in legal fees pushed both Collingwood and Richmond almost to the point of financial ruin.

So how it did it get to this situation where a few Richmond players transferred to Collingwood, and a host of Magpies went back the other way to the Tigers?

The genesis was probably the 1980 Grand Final when the Tigers destroyed the Magpies by 81 points, which was then the record winning margin in a premiership playoff.

A menacing David Cloke kicked six goals and a talented midfielder Geoff Raines had a game-high 36 disposals, as the Magpies could barely believe their dominance.

Collingwood’s much lampooned premiership drought stretched back to 1958. Another Grand Final loss came a year later – this time to Carlton – before a frustrating 1982 season cost Tom Hafey his job.

Richmond missed the finals the year after its 1980 flag, costing Tony Jewell his job. But the Tigers came close again in 1982, finishing runners-up to Carlton, yet that loss cut them deeply.

And as the two teams positioned themselves to chase premierships at almost any cost, it led to something akin to a declaration of war between the two.

The hostility ran deep off the field as on it. Collingwood’s failure in 1982 led almost to a civil war of its own.

The John Hickey administration had been challenged by a group known as ‘the New Magpies’, led by media proprietor Ranald Macdonald. It was a time when the past collided with the brave new world of football.

Most of the VFL clubs – some of them existing metaphorically on the smell of an oily rag – gambled their future on the present, by embarking on unprecedented recruiting campaigns that were waged across a competition – without fear or favour or even about financial prudence.

The Tigers, too, had their big dreams, and their hard-nosed administrator Graeme Richmond, demanded more success, wracked by the disappointment of the 1982 Grand Final loss.

It’s fair to say that the Magpies crossed the line first in 1983, but only after they realised disenchantment among some of the Richmond players, frustrated by the club’s ruthlessness and some divisions within the group that had a fair bit to do with new coach Francis Bourke.

Cloke sat down with the Tigers to suggest the club was taking its players for granted. Raines was angered by the fact he could not command the same sort of money as the club’s 1982 high-prized recruit Maurice Rioli.

When the Magpies knew they were likely to lose Brownlow-winning ruckman Peter Moore, they quickly fixed their attention Cloke, who had just turned 28 and still had plenty of good football left in him.

Collingwood fans were shattered to lose Moore, but the club was to secure potential stars, including Cloke, high-priced WA players Mike Richardson and Gary Shaw (who was originally a Queenslander), as well as cheaper recruits such as Phillip Walsh from Hamilton.

Shaw’s transfer fee alone was more than $300,000 – the price of a half-dozen houses in some suburbs back then.

Money was changing hands as if it was confetti.

And while the Tigers resisted strongly to the fact that they might lose Cloke, the VFL Appeals Board granted the big man a pathway to Victoria Park. To rub salt into the wound, new Collingwood coach John Cahill made Cloke the vice-captain.

But the unrest between the two sides turned into a full scale war when Raines informed Richmond that he too wanted to leave for Collingwood. It all came back to a meeting Raines had with Richmond, the administrator.

Years later he told the Herald Sun: “I felt I’d put my heart and soul into the joint and they weren’t giving me due respect. “Nothing against Maurice (Rioli), but I’d won three best-and-fairests and finished runner-up in another one, and I’d heard during the year Maurice was getting a lot more (money) than me.

“At the end of the year I just went to the club and said: ‘Whatever Maurice is getting, I’d like the same.'”

“All I said was I wanted comparable pay.

“‘GR’ (Graeme Richmond) came back and offered me a feeble amount. It was an insult really.”

It was only when Richmond realised Raines was serious about leaving – to Collingwood, of all clubs – that the Tigers sought to desperately fight off the Magpie offer, but it was too late.

“Richmond had lost the first three or four games and ‘GR’ came around to see me.

“He said: “We’ll give you what you want’. I said: “No, I have given my word (to Collingwood), there’s too much water under the bridge.”

Raines fought Richmond on the threat of legal action before the Tigers finally relented in mid April 1983, after the season had already started.

As one newspaper said at the time, “The big spending Magpies are believed to have paid Richmond $180,000 for Raines and given permission to interview three Collingwood players, Neil Peart, Wally Lovett, who both trained at Richmond last night, and Terry Domburg, who is playing at Portland and is undecided whether he wants to return to the VFL.”

Fittingly, the Raines deal was completed between the two clubs at the South Yarra offices of his solicitor. He rushed from there to Victoria Park for his training session in Black and White.

The Magpies beat the Tigers twice that season and on one of those occasions the club’s banner read: “Out in the Woods, without a Cloke, and it Raines”.

But Richmond – the club and the administrator – plotted their revenge, having lost two key players to Collingwood as well as Bryan Wood to Essendon.

They made a play for one of Collingwood’s favourite sons, Peter Daicos, and for a time the star Magpie gave it plenty of consideration.

“That was the period when Collingwood and Richmond were at war, pinching one another’s players,” Daicos recalled. “The money on offer was well above what I was being paid, and although I didn’t really want to leave, I was a bit excited about it and told my father.

“I will never forget his response.

“He said: ‘Look, your name is with Collingwood, Peter Daicos at Collingwood.'”

“It was sound advice. It doesn’t matter when money is being thrown around; it’s a question of losing your identity by leaving your first club, particularly when you are a well-known player.”

But if that poaching pathway was blocked, another opened, and it helped to drive a wedge further between the two clubs.

Walsh had been Collingwood’s best first year player in 1983, and looked to have a long and successful career in black and white ahead of him…until Richmond swooped in, intent on revenge.

It was said Richmond “bluntly told the football world that cost was no obstacle” and that was the way in panned out as Walsh and later Jon Annear were prepared to head to the Federal Court to make a move.

That move made Collingwood furious, and the Magpies also lost Craig Stewart to Punt Rd in 1984, and a year later Peter McCormack also headed to Richmond.

The Magpies hit back again in 1985 when it managed to secure Tigers forward Brian Taylor, who would eventually go onto kick a century of goals a year later. But for all the changes, what hurt the most was the financial bottom line.

Collingwood’s New Magpies pushed the club to the point of extinction in 1986 when the banks were ready to foreclose on the most famous football club in Australia before the club started to fight back.

One of the main reasons was the exorbitant transfer fees that leaked money out of both sides.

Richmond, too, was all but broke by the end of the 1980s, putting their hands out for assistance to save the club.

Raines would not last long at Collingwood, leaving for two more clubs, Essendon and Brisbane. But he still has a bitter taste about the poaching war that changed Collingwood’s relationship with Richmond.

“It was crazy what the attitude was,” Raines said.

“The attitude was ‘If they get one of ours, then we will get one of theirs’.”

And, 30 years on, club legend Royce Hart believes the war was responsible for pushing the club backwards to the point that it has not won a premiership since.

Jewel agreed: “You could go back to when we lost Cloke, Raines and Wood, that was the demise…we went broke because we attacked Collingwood to try to get even.”

The late, great Bob Rose acknowledged the New Magpies spent too much money chasing players during those years.

Rose said: “We imported a lot of players from interstate and from other clubs (at the time)…and I believe we paid too much for some of those players.”

But the investment in David Cloke is still paying dividends 31 years on.

David played 114 games for the Magpies before heading back to Richmond for two final seasons.

Those seven seasons at Collingwood meant his sons – Jason, Cameron and Travis – were all eligible for father-son selection, and they all chose the Magpies over the Tigers.