The trip that kick-started The Machine 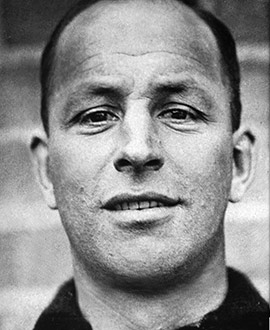 Syd Coventry led Collingwood to the first of four consecutive premierships in 1927.

It’s the most arduous trip Collingwood makes in a football season, crossing the Nullarbor to play in Perth.

Since West Coast joined the competition in 1987, it’s been part of the AFL calendar for the Magpies, and that has only increased with the birth of the Fremantle Dockers in 1995.

There have been successes and failures out west, including the extra-time finals win in 2007 against the Eagles, which stands in modern memory as the most influential win the club has attained in Western Australia.

But, for all that, no trip to Perth has ever had the significance of what happened when a group of Magpies players and officials visited Perth in 1927. It was the trip that kick-started the famous Machine side.

Collingwood was coming off successive Grand Final losses in 1925–26, and at the club’s annual meeting leading into the 1927 season, angry fans threatened to tear up their membership tickets in frustration.

The pressure was on everyone to succeed. Part of that came from the sacking of the club’s captain Charlie Tyson so close to the start of the home-and-away season. Collingwood replaced him with Syd Coventry, and the club had promised a trip to Perth would be held during the mid-season break for interstate football to help foster relationships between the playing group.

There was criticism from some critics as to whether the trip would prove a costly distraction from what really mattered – winning the 1927 VFL premiership.

Jack Worrall, the game’s first coach, and one of the most successful leaders of all-time, offered a word of warning in The Australasian.

Worrall explained: “It is well known that trips in the middle of the season have won and lost premiership ‘ere this, although there is a long risk in a long train journey. But when all is said and done, it really depends on the self-control of the players themselves and on the management.”

The club was confident it had all things prepared and that the trip would unite the team and make the bonds between the players even stronger.

One problem arose just before the Perth visit. The VFL selected Syd Coventry and his brother Gordon to play for Victoria while the club desperately wanted the superstar siblings to be a part of the trip.

Club treasurer and VFL delegate Bob Rush made a last-minute plea to the league to allow the Coventry brothers to join the party preparing to head to Perth. But the appeal was denied, and the two key cogs in the Machine were missing when the Magpie players gathered at the station to catch the train headed west.

Still, the players left the station on a train with “the delight of schoolboys on their annual holidays” on the Monday after a game against South Melbourne. Some of the men took cameras and the pictures still remain of the various stops the train made in the journey across Australia, including at remote locations where the locals looked on with bemusement at these young men in Black and White blazers with a Magpie on the side pocket.

The Collingwood party were “welcomed by a big crowd of football enthusiasts”, when arriving in Perth on the Friday morning after four nights of travelling.

That first night they were treated to a “smoke social” at the Hotel Australia, while other bonding events included taking a motor launch up the Swan River, a dinner and smoke night with the South Fremantle Football Club (with the tables named after streets from Collingwood and Perth), a gala night at the Theatre Royal, an evening at the trots as well as motoring excursion into the Perth hills.

There would also be two football matches played – none for premiership points, of course – against a combined Western Australia side, at Subiaco. They squared the results, with the Magpies winning the first game and narrowly losing the latter. After that second match, Collingwood farewelled their hosts and boarded a steamship headed back to Melbourne.

So many of the players and the officials would later describe the trip as the fire that forged the string of premierships the club would win in the coming years.

Legendary coach Jock McHale, who himself had ventured to Sydney with a Collingwood team in his first year of 1903, maintained that the 1927 visit to Perth played a significant role in what was to come next.

He would say on his return to Melbourne: “I had heard it was the golden west and I was not disappointed … it was the best trip I have been on in my long experience.”

The players enjoyed the experience of their lives … but Worrall may have felt a little justified when Collingwood lost its first match on their return, going down to Fitzroy in a shock defeat.

The Magpies had led by 33 points at the main break, only to tire badly in the second half. One player admitted after the game: “I’d have given a quid for a sleep at three-quarter-time.” Another was said to have gained more than a stone to his playing weight before the trip.

One of the selectors, ‘Torchy’ Laxton, said after the loss to the Maroons: “They were a little overweight … train travelling for any length of time puts weight on athletes … the same applies to ship travelling – unless one, of course, is seasick, which makes reduction an easy manner. The Collingwood players who went away should feel the benefits of their trip later on and possibly will be at their best in the finals.”

Laxton was right, even if the Collingwood bulletin board in the rooms was a lot harsher in its assessment. It read: “Do you realise the seriousness of that defeat? Are you going to allow history of the past two seasons to be repeated by failure at the critical time? Loss of the 1927 premiership would be the greatest blow which could be given the club and a repetition of Saturday’s performance means premiership suicide. Buck up. Pull yourselves together.”

Collingwood wouldn’t lose a game for the rest of the season. The Machine clicked into gear, winning the last two home-and-away games and two finals, including the decider against Richmond.

It was the first of four successive premierships for the Machine – from 1927-30 – with the men who achieved them maintaining the Perth trip had sown the seeds of the most stunning string of success in the game’s history.