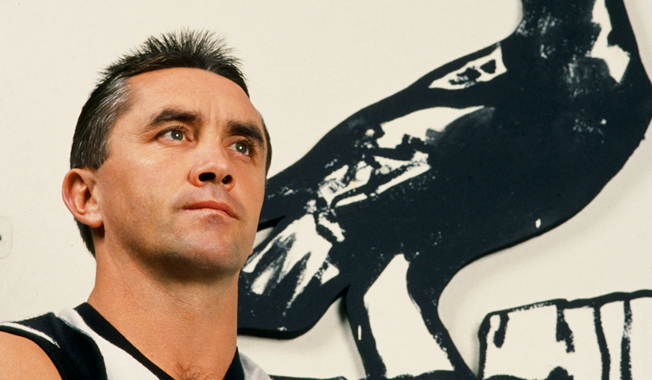 Tony Shaw became the second Collingwood footballer to play 300 games, when he ran out onto the MCG against North Melbourne on May 20, 1994.

It’s one of the anomalies of Black and White history that only two Magpie players – Shaw and goal kicking machine Gordon Coventry – have reached the triple ton.

Collingwood’s long and storied history suggests it should never be seen as a given that a player seemingly sailing 300 games will actually get there by the end of his career.

Whoever becomes the third Magpie to make it will unquestionably be afforded more attention than Gordon Coventry had on July 31, 1937, when he became the first VFL player to reach that long-awaited milestone. Coventry got some congratulatory messages before the game against Footscray at the Western Oval and was even afforded three cheers from the Bulldogs players before the start of the match.

But for a club that celebrated team achievements far more than individuals ones, Coventry’s feat was admired and respect, but wasn’t something that overshadowed the contest that was about to take place.

He might have had some ‘folding kind’ slipped into his massive palms from long-time benefactor John Wren, but coach Jock McHale wasn’t about to put the goal kicker ahead of the rest of the team.

On that day, Coventry – six weeks away from his 36th birthday and final game –  was upstaged by a kid almost 20 years his junior, Magpie wunderkind Des Fothergill, who kicked five goals to the full-forward’s two.

And the match was highlighted by one of the most remarkable first terms in the history of the game.

In the space of less than half an hour that day, Collingwood amassed 10.5 (65) to Footscray’s 0.2 (2). It was the third highest greatest margin at quarter-time to that stage, and remains the equal eighth highest.

There was time for a brief celebration in the rooms after the game before the Collingwood team had to scurry away in order to catch the Taroona to depart for Tasmania that night, for a mid-season sabbatical.

Some of the more rowdy elements of the team no doubt toasted Coventry’s achievement on the trip across Bass Strait, but the gentle, humble full-forward would likely have been playing it very low key.

Coventry wasn’t much given to hype.

Quietly and without a fuss, he congratulated Dyer, wished him all the best and promptly climbed back on the rattler to take him home again.

Coventry would never see another Magpie reach 300 games in his lifetime. He would die in 1968, and it would not be until 1994 that Shaw became second – 57 years after the champion full-forward became the first.

Shaw had fireworks and festivities to salute his 300th game, though they were not specifically for him.

They would coincide with North Melbourne’s celebrations of its 125th birthday. That came in Round 9, 1994, but it was not the result that Shaw or the Magpies would have wanted.

Still, the record of the kid that had grown up with a steely determination and a fierce will to win – not to mention a passion for proving people wrong – was worth celebrating win, lose or draw.

Shaw had followed his brother Ray to Collingwood in the late 1970s.

He overcame doubts about him, and question marks about his height and his speed to become one of the club’s favourite sons. The kid from Reservoir-Lakeside graduated to be Collingwood’s 1990 premiership captain and Norm Smith Medal winner.

By 1994, though, he was into his final season. He had handed over the captaincy reins to Gavin Brown and was intent on playing one last season without restrictions.

Brown almost didn’t play in Shaw’s 300th game. He had been suspended for two matches after being found guilty of striking St Kilda’s Dean Greig, before some new video evidence came to light which saw the case thrown out on appeal.

Still, it didn’t stop football manager Graeme Allan copping a $2000 fine for saying that the original penalty had been a “slur” on Brown.

North Melbourne was feeling the heat, too. Their skipper Wayne Carey had been banned from playing after being nailed for striking Fitzroy’s Peter Sartori, and there was no wriggle room or new video to stop it.

Kangaroos coach Denis Pagan said Carey’s absence would fire his team up ahead of the clash with the Magpies, while his counterpart Leigh Matthews insisted that Shaw’s milestone match would act as a “spur” to his men.

Shaw meant so much to the men around him.

His story was, as The Age said, “a football parable” about a young man from the wrong side of the tracks who had to fight to make his mark in the game.

He did all of that, and more, as he become an inspirational to his teammates, and his club.

For all of his self-confessed limitations, Shaw had triumphed and the club wanted to honour him with a good performance in his milestone game against a team undoubtedly on the upward spiral to success.

As he said at the time: “I have got a lot of weaknesses, but I’ve got some strengths, too. I love playing the game. I am a bit of a competitor. I hate losing.”

Some of Shaw’s quirks and tricks of the trade came to light on the eve of his milestone match as everyone from himself, his wife, teammates and friends regaled stories about what made him tick.

The club doctor, Shane Conway, told The Age: “I’ve sutured almost every part of his face over the years. He is the toughest person at Collingwood…for his ability to withstand punishment. His first coach, Tom Hafey, said: “You’d always hear his voice all over the ground, in games, in training, and not just when he was captain. He was like a general marshalling his troops on the ground, telling them to go, urging them on, giving them confidence.”

His brother, Ray, added: “He’s a Rolls Royce, in a Volkswagen. There’s Seven Wonders of the World, and he’s probably the eighth. In 1981, they (Collingwood) reckoned I was too slow and I could beat him. He’s still going strong.

“The competitive spirit came from the streets, because Reservoir is a tough area.”

His wife, Debbie, summed up her husband as “a competitor.”

She said: “I never thought Tony would play 25 games, let alone 300. When he got to 50, it was a great effort, and so too 100, and 200, and 300 – wow. But just because he wants to finish his career on a good note this milestone becomes secondary. It’s like the Norm Smith Medal and the Copeland Trophy meaning nothing at all in the context of the (1990) premiership.”

North had nine 100-plus gamers.

The least experienced Magpies were Damian Houlihan (third game), Brett James (fifth), Jon Hassall (eighth) and Kent Butcher (11th). Nathan Buckley, in his first season in black and white, was playing his 28th AFL game, but only his eight in Collingwood colours.

The promised fireworks almost didn’t happen. Three hours before the game an electrical fault saw a few of the fireworks go off prematurely. One observer said: “It sounded like an atomic bomb” as the fire brigade from the nearby East Melbourne station rushed to the MCG.

Still, it ended up being all right on the night, as the MCG light towers went out briefly before the sky burst into a spectacular light show.

Collingwood produced a good start to Shaw’s 300th game, gaining the early ascendancy and looking as if it had the upper hand on North Melbourne. Four goals to three in the opening term was a solid start for the Magpies, but it got better early in the second term as the lead burst out to 34 points in Collingwood’s favour not too long before half-time.

Then, the Kangaroos cut it back a couple of late goals, to trail by only 17 points at half-time.

Mike Sheahan, of the Herald Sun, wrote: “The Magpies threw the game away during the third quarter with a performance that raised serious doubts about both their depth and their spirit.”

Sadly, for Collingwood, and for Shaw, the Kangaroos kicked 11 goals to four in the second half to secure the victory by 33 points.

Shaw, as always, tried his heart out. But in many ways, his performance mirrored that of his team.

The Age said: “He matched his side in starting well, but missed an easy shot for goal at the end of the third term and began the last on the bench. He played out the match with typical spirit, acquiring 25 possessions, but was powerless influence the outcome.”

It wasn’t the result that anyone at Collingwood wanted, but at least Shaw fought it out to the finish, as he would do for the next 13 games, leading into the Elimination Final loss to West Coast.

In one of their most courageous performances of the season, the Magpies almost knocked off the Eagles, but went down by only two points as the siren sounded with the ball in their forward line.

Shaw had a tear in his eye as he came off the WACA that day, but he and his teammates – and the legion of Magpie fans across Australia – knew he had given his all and extracted every bit out of himself.