Tranquilli's moment in the sun 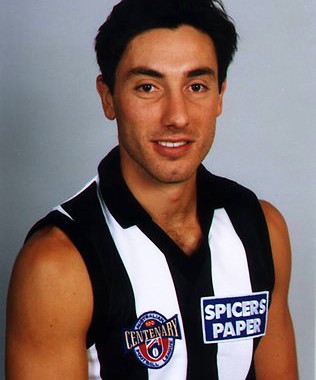 Andrew Tranquilli's head shot in 1996, the guernsey displays the AFL logo celebrating 100 years since the creation

Andrew Tranquilli played the football match of his life to help steer Collingwood to a remarkable win over the eventual premiers West Coast.

Tranquilli only managed 12 games in his abbreviated AFL career, but is best remembered for his catchy surname and his clash with the Eagles back in June 1994.

The one-time Marcellin footballer may have only played a dozen games in black and white, but he did in that time frame what so many others haven’t been able to do – kick half a dozen goals in one match.

He had initially been picked up as a prospective defender when taken by the Magpies as pick 68 in the 1993 pre-season draft.

The Herald Sun said at the time: “Tranquilli is a steady defender who shows great poise and class. If he continues to improve at the same rate…he may well push for senior selection this season.”

Tranquilli did that, winning selection for one game in 1993, against St Kilda, where Collingwood came from 20 points down at the last change to record a 12-point win.

His second game was round one the following year, against Fitzroy, but despite kicking a goal, he was consigned to the reserves until that Eagles match in round 13, 1994.

The 1994 season was tightly contested one.

The Eagles were on top of the ladder to that stage, having lost only two games previously, to Essendon at the MCG in round one, and to Hawthorn at Subiaco in round five. They were on a six-game winning streak heading into the Collingwood game.

The Magpies had already lost five games, including the previous Monday to Richmond by a whopping 66 points. They kicked only four goals that day, which was on the Queen’s Birthday public holiday.

Everything pointed to an Eagles’ win that day, with very few of the football pundits giving Collingwood much chance of beating Mick Malthouse’s powerful side.

Injuries had impacted on the Magpies. Brad Rowe had dislocated his shoulder in the game against the Tigers. Other players who could not be considered against the Eagles were Craig Kelly, Paul Williams, Gary Pert, Brad Plain and Kent Butcher. Damian Houlihan was also missing due to suspension.

The Eagles were without skipper John Worsfold (shoulder), who was a late withdrawal, and Peter Sumich (hamstring), who was not right to play.

Magpies coach Leigh Matthews assured fans the club would still be right in the hunt to upset the Eagles, despite their poor showing six days’ earlier.

“Our form had been OK before Monday (the Queen’s Birthday clash with Richmond game),” Matthews said.

“We will have the home state advantage (against the Eagles).

“They’re the only side that’s won nine games, so statistically they’re the best team.”

Midfielder Mick McGuane had his own battle just to play, barely training before the lead-up, due to a groin injury. Matthews admitted that they had to nurse him through the week.

The Herald Sun summed up the Magpies as “undermanned, out-of-form and down in strike power. Collingwood should be swamped by the efficient and competent West Coast.”

Sunday Herald Sun columnist and Carlton great Alex Jesaulenko was happy to dig the boots into the Magpies, writing: “Collingwood lacks the overall potency to make a match of this…Most of the players they have brought back are only kids, incapable of matching it with the best just yet.”

“They (the Eagles) are a good team, but they are not unbeatable.”

The Magpies coach pointed to the fact that he believed high-priced recruit Nathan Buckley, in his 13th game in Black and White, was ready to strike his best form, after being only “fair” to that stage.

The Age wrote: “He (Buckley) is not paid huge sums of money by the Pies to be ‘fair’.”

Interest in the game was modest in the lead-up, given Collingwood’s poor form against Richmond.

One columnist mused: “A few weeks ago, a lot of fans had this one underlined in their diaries. Collingwood v West Coast on a lazy Sunday at the MCG had the makings of genuine all-in, last-man-standing, raise-the-roof corker. But the turnstile attendants might find today several thousand of those fans have taken a sudden interest in poetry reading or decided it’s a good day for a Devonshire in the Dandenongs.

“The reluctance of supporters to subject themselves to today’s match is based on one proposition: if the Magpies kicked four goals against Richmond, how many are they going to get past the best defence in the AFL.”

He was right about one thing. Only 27,699 fans turned up to the game, an exceptionally poor crowd for Collingwood at the MCG.

Tranquilli wasn’t a kid – as Jesaulenko had said – but he was a relatively inexperienced 22-year-old brought into the team for his third game – more in hope than expectation.

Wearing No.37, he was named at half-forward. He was one of six changes, with Todd Curley, Mark Fraser, Paul Sharkey, Scott Russell and Jason McCartney all coming in.

It was a gamble from Matthews, though he probably didn’t have much of a choice.

He admitted as much after the game, saying “Anything was going to be a gamble…we kicked four goals last Monday, so anything we did was worth having a go and that happened to work for us.” He said it was “based on good old fashioned hope as much as football science.”

“We decided to set up some height in front of goals and just said to kick the bloody thing there and don’t mess around. We chipped the ball around so much last Monday. Why, I don’t know.”

Just a few weeks earlier Tranquilli had been banished to the reserves’ backline in order to try and regain some form.

He would tell reporters after the match: “I’ve been playing on the half-back line for the last month trying to get my confidence back by running straight at the ball and it has paid off.

“I played the first game and got dropped. My head dropped a bit, but it has come back now. We were just told to go at it, get respect back and really work for four quarters. And we did it.”

Tranquilli had the perfect start when he kicked the opening goal of the game within two minutes. It was the first of his six goals for the game.

Matthews had asked for a commitment from his players from the start. Tony Shaw, who had handed over the captaincy to Gavin Brown that season, showed it almost immediately when he crashed into Drew Banfield at the opening bounce. He would show a similar commitment during the second term when he rode a big bump from Chris Mainwaring, before dishing off to McGuane, who slotted through a critical goal.

Collingwood led by 13 points at quarter-time, and then outscored the Eagles in the second term. The Magpies were three goals clear by half-time, with Buckley kicking a superb second-term goal.

At half-time, Collingwood was cheered off by a small but remarkably vocal faithful, which prompted Shaw to respond to the rest of the group as they left the field.

Shaw yelled at the players: “Don’t listen to them…we are not finished yet.”

West Coast was not done with either.

The Eagles worked hard to try and get its way back into the contest. Late in the third term, time-on goals to Tony Evans and Guy McKenna, who had been beaten by Buckley, cut the margin back to only 13 points, which set up an intriguing last term.

But Collingwood was up for the challenge. Six last term goals to their opponents’ two pushed the home side to a 37-point win over a team that would win a premiership just over three months later.

Tranquilli punted home his sixth goal during that final term to cap off his best day in football. He earned one Brownlow Medal vote for his performance, with Gavin Crosisca polling three, and Damian Monkhorst two.

Buckley must have been stiff to miss out, after outpointing McKenna at half-forward. McGuane did a good job on Mainwaring, while Mark Fraser had the better of Peter Matera.

Matthews said: “We were probably fortunate today everyone had written us off. We had psychological initiative, I suppose, and it has to rank as a very good win.”

“We didn’t create turnovers that resulted in opposition goals. That was critical and our defence held up very well. It was pretty important our half-back line gave us some bounce and we tightened up on the wings, which is standard procedure for the Eagles.”

Speaking about the poor crowd, he said: “I think it proved Collingwood supporters had given us away too.”

Collingwood would meet West Coast again later in the year, in a final at the WACA, and it would end in far more dramatic circumstances in what was Shaw’s final match.

The Eagles would win by two points.

With less than 10 seconds left, Pert drove the ball long into Collingwood’s forward line, but McGuane couldn’t drag in a chest mark that might have changed the result.

Tranquilli played that day, kicked a goal, but did not have the same sort of impact as he had in June that year.

Sadly, his brief strut upon the Collingwood stage was almost over.