It’s one of the greatest individual finals performances in Collingwood’s history, but for too long it has been overshadowed by what happened in a match a fortnight later.

Half a century on, it’s well worth a re-visit.

Des Tuddenham‘s seven goals, including three late in the final term, helped to sink St Kilda in the 1966 Second Semi-Final. It was a virtuoso performance that in so many ways personified what he meant to Collingwood.

His extraordinary game on the half-forward flank elevated Collingwood into another Grand Final. Some wondered if they had seen a better leaders’ game. The Saints knew one man had cost them the game.

If Collingwood had won that Grand Final a fortnight later, Tuddenham’s solo effort would have remained the stuff of legends.

But heartbreak often clouds the memory, and cruelly Tuddenham’s magical Semi-Final match has been seen as a footnote to what happened next – another heartbreaking Grand Final loss, this time by the barest of margins against a team that hadn’t won a flag beforehand, and haven’t won another one since.

Let’s put aside that 1966 Grand Final for a moment, and concentrate on the Second Semi-Final, a moment that deserves its time in the sun again.

On the Monday night before the semi-final Tuddenham finished his training session and wandered over to the reserves group at the other end of the ground. Always seeking to improve, he had a chat with reserves coach Neil Mann, a former Magpie great, who offered some advice that would prove invaluable the following Saturday.

Mann told ‘Tuddy’ to practice some goal kicking on the run, breaking away from opponents, as he had been missing a few shots of late.

One of those in attendance that night as the floodlights at Victoria Park barely penetrated the darkness explained later: “Tuddenham spent half an hour popping the ball through from all angles.”

Tuddenham, 23, had every reason to think 1966 would be the year the Magpies won their 14th flag. Collingwood had finished on top of the ladder, a game clear of St Kilda, Geelong and Essendon, having won 15 of its 18 games. Only Essendon (twice) and Carlton had beaten them that season.

St Kilda on Second Semi-Final day stood between the Magpies and the Grand Final, and Tuddenham felt as if the goal kicking practice that Mann had forecast would stand him in good stead when it counted.

Starting the game well was a focus, and it couldn’t have worked out any better. Collingwood kicked five goals to nil in the first quarter, and half an hour into the game, the game seemed to have the game at its mercy. 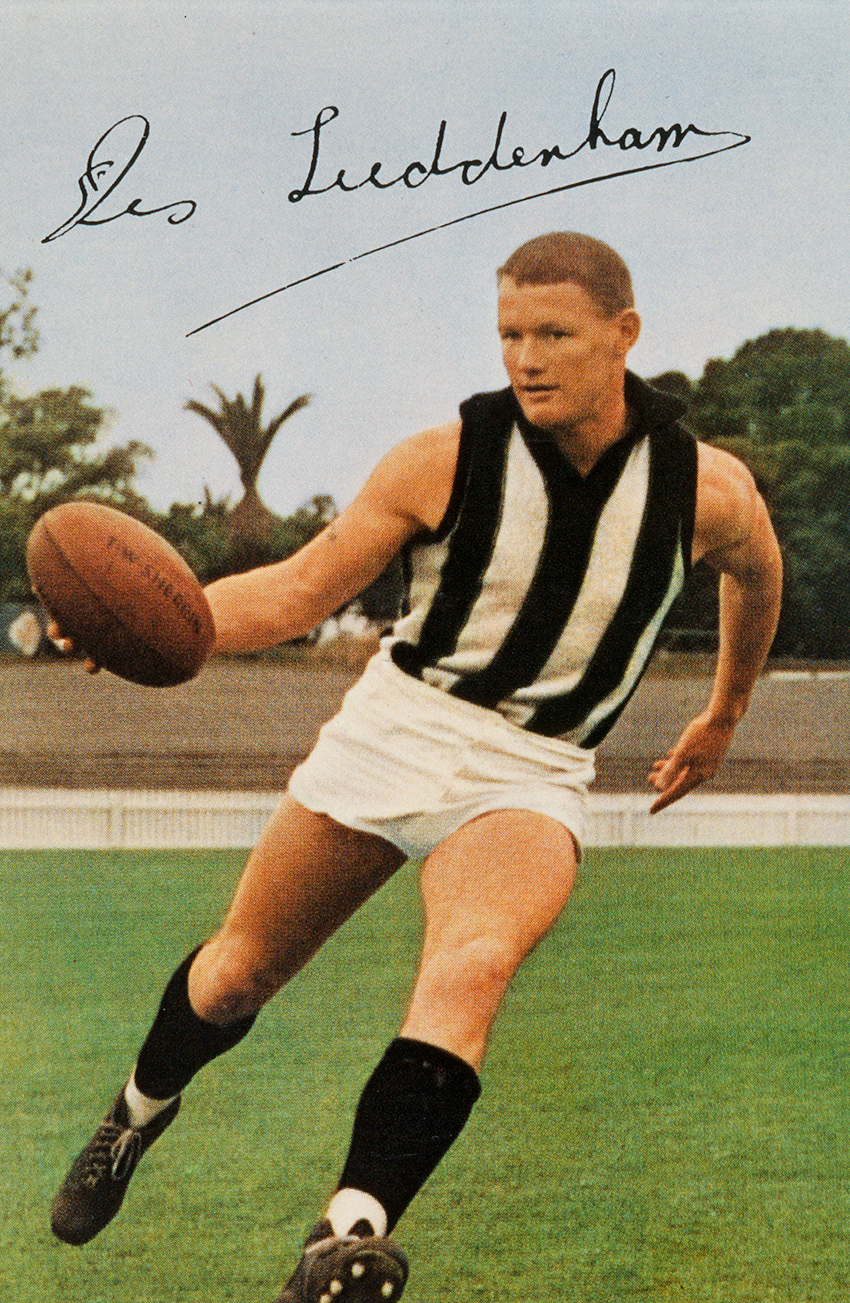 The Herald’s senior football writer Alf Brown praised Tuddenham for his early work, with the Magpies skipper kicking a goal in the first term, along with two from Ian Graham and singles to Barry Price and Wayne Richardson. But Brown was critical of one passage when the Collingwood skipper crashed through a pack and knocked over a Saints’ player, bringing about a free kick. He said it was “foolish play by a captain.”

The 31-point lead at quarter-time was exactly what coach Bob Rose wanted. It was the platform from which the Magpies could hopefully bring about an easy kill, and the week off the following week.

But St Kilda fought back determinedly with multiple goals to Travis Payze and Kevin ‘Cowboy’ Neale, as well as a single goal to Ian Cooper in the second term.

Tuddenham managed Collingwood’s only goal for the term, with Brown recording he had been “given far too much freedom by (his opponent) Daryl Griffiths” when he ran in to kick his second major.

St Kilda’s six goals for the term had seen Allan Jeans’ team claw their way to a two-point lead at the main change. The game was in the balance and no one in the rooms was as animated as Tuddenham at half time.

The Saints maintained a slight edge in the third term, with each team booting four goals (Tuddenham kicked two more), but the four-point margin at the last change meant the game could easily go either way.

Tuddenham recalled: “We got away to a good start early which we have not done in recent matches, and our first quarter was a good team effort.”

“We relaxed in the second and third quarters, and this allowed St Kilda to hit the front.”

The messages were simple amongst the Collingwood group – clear out the attacking zone and give the forwards the chance to have a bit more room.

Tuddenham had kicked 4.0 to this stage. He hadn’t had a blemish until the 10-minute-mark of the final term. He “wrung his hands in disappointment” and the Pies’ fans groaned, wondering if it might come back to haunt Collingwood. Few could have predicted what came next, as well as the crucial role that Tuddenham would play in it.

The inspirational skipper would kick three goals in the latter half of the final term, turning the game off his own boot. One of them gave Collingwood the lead 23 minutes into what was a tense and tight final term, and he proved just too elusive and just too strong for his opponent, Griffiths.

“With 15 minutes to go, Tuddenham’s determination to kick goals took him across to the flank on the opposite to the one he had been on all day. I’m glad I wasn’t in Daryl’s position. I don’t want to take anything away from Tuddenham – he won it for Collingwood. But keep in mind, he had eight shots and he kicked seven goals. It was radar-like accuracy.

“An opponent can do a good job in holding him, (but) then he breaks away for a few goals and all the good work is forgotten.”

It wasn’t a few goals. It was seven, and his performance was enough to lift Collingwood onto a 10-point win over St Kilda. After the game, Tuddenham admitted: “I’ve never kicked that many goals in a football match in my life.” 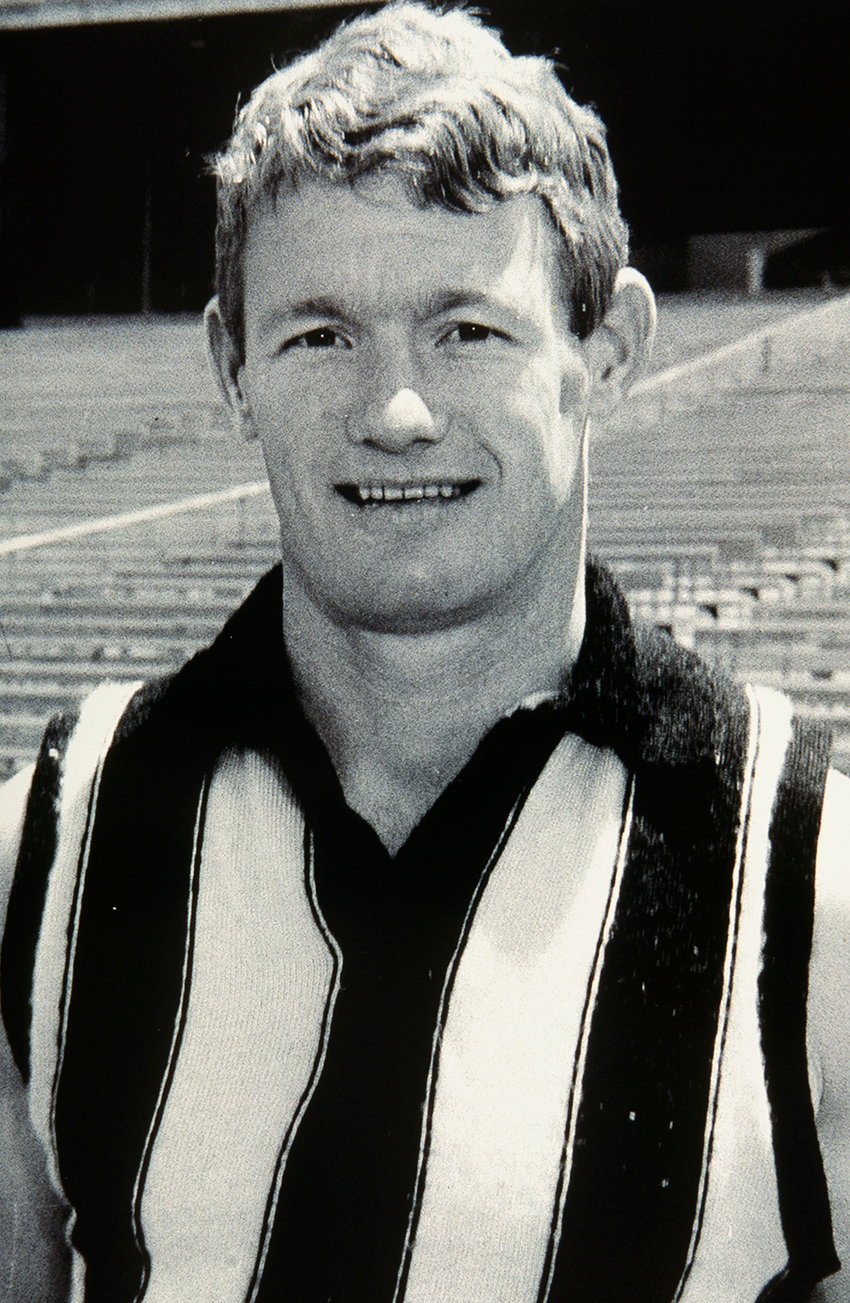 The Sun News-Pictorial front page on Monday showed a contrast. There was a picture of Griffiths in tears in the rooms after the game being consoled by the suspended Carl Ditterich, as well as an inset of a victorious ‘Tuddy’.

In the same edition, Lou Richards suggested it was the perfect performance from a Collingwood captain, and should be shown to all those who aspired to the role into the future.

Richards wrote: “Collingwood’s captain courageous grabbed what looked like a winning opportunity when he slammed through a left-footer for the lead with about 10 minutes to go.”

“When Brian Mynott snatched the lead back for the Saints, things looked bleak for the Magpies. But then ‘Tuddy’ did it again – twice – and Collingwood had won the semi-final that must rank with the best of all time.

“Those last three goals put the seal on Tuddenham’s best on ground performance. The club should get a newsreel copy of his effort and file it away under the headline ‘How to Play a Collingwood Captain’s Game’ for showing to future skippers.”

Bob Davis called Tuddenham a “sledgehammer … no one ever played a better captain’s game than Tuddenham pulled out of the hat for Collingwood. And I doubt anyone will put in one equal to that.

“A half-forward flanker who can bulldoze seven goals in a finals match is a coach’s dream. In Tuddy’s book, it is a case of Collingwood first and sticking plaster last, where angels fear to tread, he’s the first in the queue.”

Tuddenham was writing a guest column for the Sun News-Pictorial at the time, and he admitted after the game that relief as much as anything was the emotion. He was exhausted and needed the week off, saying: “I’ll be honest the Second Semi-Final took a heavy physical toll of every player – including me – and I don’t think St Kilda can recover sufficiently to hold off the confident, fresh Bombers (in the Preliminary Final).”

He was wrong on that count. St Kilda won easily, and Jeans and his match committee worked on a plan to stop Tuddenham in the Grand Final. This time it wasn’t Griffiths, it was eighth-game player John Bingley.

For his part, Tuddenham didn’t care about how many goals he might kick in a Grand Final, so long as the Magpies kicked more than the Saints. He said: “I have forgotten about those seven goals. I don’t care if I don’t kick a goal. As long as Collingwood wins, I’ll be happy. I would be just as happy if seven teammates kicked a goal as I would with another seven goals myself.”

He would kick three of Collingwood’s 10 goals for the game. He had pleaded with Bob Rose to let him play in the Grand Final. But the coach wanted him forward again. So for the first three quarters of the Grand Final, Tuddenham was at half-forward before being shifted onto the ball when the game was in the balance.

With the Saints one point ahead in the dying seconds, Tuddenham was the last Collingwood player to have possession of the ball. With timing running out, he ran along the wing and instead of taking a bounce, he opted to shoot the ball long into attack, looking for a forward. But it was intercepted by St Kilda’s Bob Murray and his clearing kick hadn’t even landed when the final siren sounded.

St Kilda was premiers, finally, and in that moment, Tuddenham’s Semi-Final heroics became a distant memory. 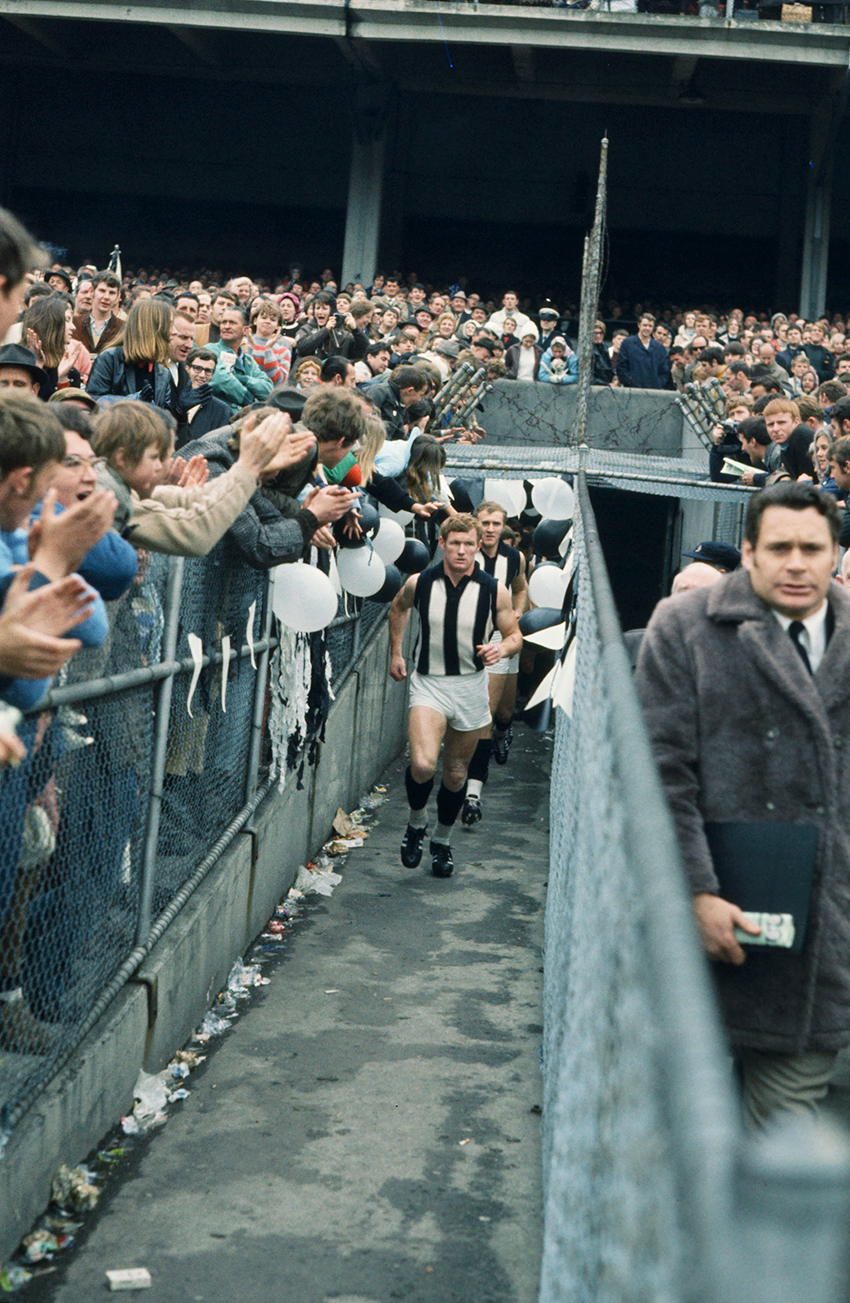 Des Tuddenham leads his Collingwood teammates out onto the MCG. Photo: AFL Media.