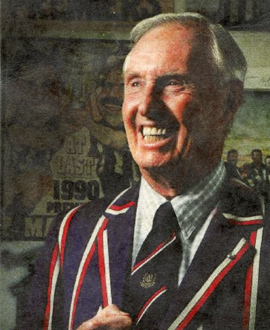 The Collingwood Football Club Archives Committee lost one of its great servants in May when Tom Wanliss passed away at age 93.

Tom’s name might not have been known widely amongst general Magpie fans but within Collingwood historical circles he was a revered figure.

Club historian Michael Roberts said he and his regular co-author, Glenn McFarlane of the Herald Sun, were in awe of Tom’s command of stats and football knowledge.

“We used to call him The King,” said Roberts. “You could show him any team photo from the 1940s or ’50s and he’d be able to pick out any player – even those who only played a handful of games.

“He was great with stats, but even better with memories. He’d seen so much footy through his life – he saw first-hand well over 60 VFL/AFL grand finals – and he could, until relatively recently, recall most of it as if it was yesterday. He’d been a part of the Archives team since 2000 and he contributed so much.

“He’d also named his cat ‘Fothy’, after his favourite player Des Fothergill, and that also speaks to just how much he loved the footy club.”

But football wasn’t Tom’s only obsession. He was possibly even more passionate about cricket (he’d seen his first test match in the mid-1930s when Don Bradman made a double ton) and spent many years as a volunteer in the MCC Library. He was also an influential figure in the Victorian and national jazz scene, passionate about social justice causes and spent many hours volunteering in community service.

“You could talk to Tom for hours on just about any subject, but get him talking footy or cricket or jazz and you were set,” said Roberts. “He was a treasure trove of information and memories – he’d seen it all.

“But best of all he was just a ripping bloke. He had a mighty laugh and a gift for lifting any room he was in. We miss him dearly.”

The Archives Committee, and indeed the whole football club, send their deepest condolences to his children, Jane, Anne and Peter, his grandchildren and wider family.