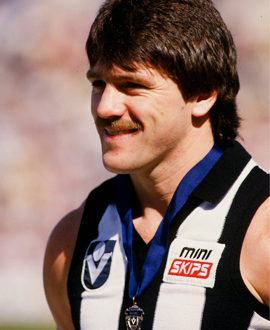 Brian Taylor is all smiles after receiving his Coleman Medal after kicking 100 goals in season 1986.

It looked like being the simplest of tasks for a player in white-hot form.

Brian Taylor needed two goals in the final game of the home-and-away season (round 22) to become the fourth Collingwood player to reach a century of goals in a season, a mark reached by Magpie full forwards just nine times in the previous 89 seasons.

Given that the 24-year-old powerful full forward, in only his second season in Black and White, had kicked 10 goals against his old side Richmond the previous week; it seemed as if it was a fait accompli.

What could possibly go wrong?

What seemed less assured was whether Collingwood’s 1986 season would be extended into the finals? That equation wasn’t just predicated on the Magpies beating St Kilda at VFL Park on the last day of the regular season; it also had to rely on second-placed Sydney beating fifth-placed Fitzroy at the Magpies’ home base of Victoria Park on the same afternoon.

That result would elevate Collingwood into the finals on percentage in what was Leigh Matthews‘ first year as senior coach, having taken over after Bob Rose‘s resignation following losses in the first three rounds.

So the Collingwood fans who traipsed out to Waverley that August afternoon were almost certain Taylor would join the likes of Gordon Coventry, Ron Todd and Peter McKenna as Magpie centurions, but somewhat less convinced that the team would be required to play the following week.

A crowd of 30,442 turned up for the match that saw the Magpies take on the bottom placed Saints, who had won only two games for the entire season.

Collingwood was in the midst of reshaping its playing list, but there was still a core group of senior players in the team. It was David Cloke‘s 249th game, and the likes of Tony Shaw (170th game), Ricky Barham (151st), Peter Daicos (132nd) and, Mark Williams (135th) brought considerable experience to a team that had nine players yet to reach the 50-game mark.

A few of those relatively young players would go on to become decorated Magpies, including Darren Millane, playing his 45th game. Others would have relatively shorter careers in the Black and White.

One of them, 22-year-old Peter Adams, was playing his second game for the club. It would be a day that he would never forget, kicking four goals.

As far as the Saints go, Trevor Barker was playing his 197th game. Geoff Cunningham and Greg Burns had been around for a long time, and plenty of the focus was on a burly full-forward in his 71st game, a 20-year-old called Tony Lockett, who had already kicked 235 goals. 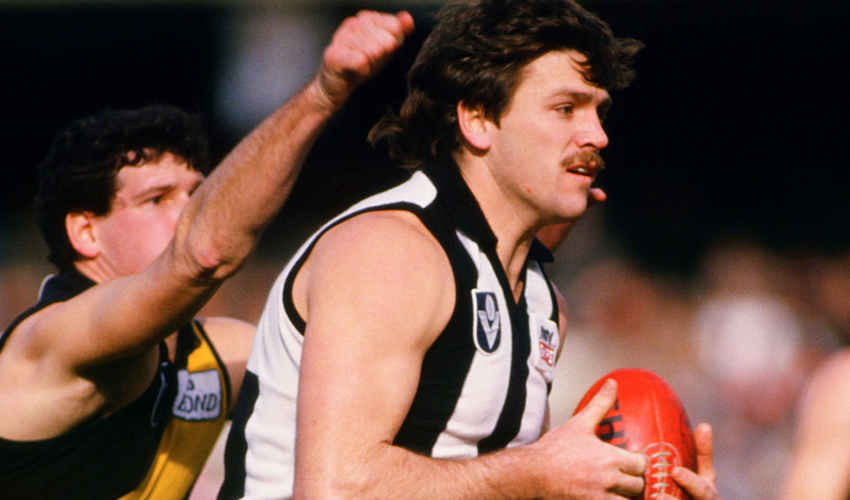 As highly regarded as Lockett was, few would have believed this kid with the strong hands, powerful frame and a prodigious punt still had more than 1000 goals left in him. Or that he would, in 13 years, overtake Coventry as the most prolific goalkicker in VFL-AFL history.

A 23-year-old called Ricky Nixon was playing his 14th game. His future in the game would be off the field more than on it. And a 22-year-old from Bungaree, Danny Frawley, was developing a reputation as one of the toughest full-backs to beat in the competition. A date with Taylor awaited ‘Spud’ Frawley.

Taylor, himself, had been in rare form. He craved the history that stood before him – becoming a 100-goal kicker – but speaking in the lead-up to the game said that the chance to play finals was more important to him.

“Goals don’t mean anything to me,” Taylor said. “If we don’t play in the finals it will be a disappointing year. We have to win on Saturday if we have any chance of making the five.”

But he knew he had his work cut out on Frawley: “Danny is a very, very good player, and he has always played well against me and given me a hard time. I am expecting a tough contest.”

Three decades on, Taylor and Frawley are firm friends, and a part of Triple M’s football team, but there wasn’t a lot of love lost between them back then.

Taylor recalled years later in the Herald Sun: “I was playing against a 22-year-old potato farmer named Danny Frawley. We had taken an instant dislike to each other a couple of years earlier (1984) when I kicked seven on Danny. He reminded me of Rick Kennedy and Danny Hughes, never leaving you alone.”

In that same article, Frawley said of his 1984 encounter: “He had three (goals) by half-time and a teammate of mine, Stephen Pirrie, who had played with Brian at Richmond, said to give him a whack because Brian was a big sook. So naive old Danny from Bungaree whacks him behind the ear after he marked early in the third quarter. He kicked the goal then came back and drove me into the ground, throttling me until I was blue.”

So the pair was wary of each other as they locked horns in the round 22, 1986 clash. Taylor needed two goals to reach the ton, Collingwood need four premiership points and some luck elsewhere, and Frawley simply wanted to annoy the hell out of the most productive full-forward of the season – without turning blue again.

However, Taylor’s afternoon did not go to plan. In an early passage of play, he suffered a groin injury, and there were fears he might be done for the day, left stranded on 98 goals.

He tried to hide his injury. And fortunately, 21 minutes into the opening quarter, he managed to shove Frawley out of the way and take a mark in the goal square. The goal was his 99th … only one major to go.

However, coach Leigh Matthews knew the extent of the injury, and wanted him off. He told Taylor so at quarter-time. There was still a game to be won – and potentially a finals series to be a part of – and if the club’s main spearhead could not run, that was a serious problem.

Taylor recalled: “Leigh Matthews said, ‘You are off’. I insisted I was OK and pleaded for five minutes.” The coach reluctantly agreed.

The burly forward was relieved when he marked a few minutes into the second term. Fans began to leap over the fence, preparing to run out, and the bluecoat security staff realised there was nothing they could do.

But it was a false alarm, as Taylor explained in an ABC TV interview after the game. “It was a shocking kick actually. I think I was in two minds … first of all, what to do with the ball and secondly, was my injury going to affect my approach. I wasn’t concentrating on the correct things,” he said.

His kick sailed to the right, and didn’t even score. It was out of bounds on the full. Taylor feared he might not get another chance.

Collingwood’s runner was soon out on the field, trying to get him off. Matthews knew he was lame and couldn’t run. However, Taylor was having none of it, and limped the other way when the runner came out.

Frawley was gaining in confidence that he could deny Taylor. He recalled: “I could tell ‘BT’ was struggling with injury early and thought, ‘Hang on, I’ve got him here’. I started to think I would go down in folklore.”

Taylor somehow threw everything into this passage of play late in the second term. He led Frawley to the ball – but only just – when the whistle sounded. It was a free kick to Taylor within kicking distance … right in front. 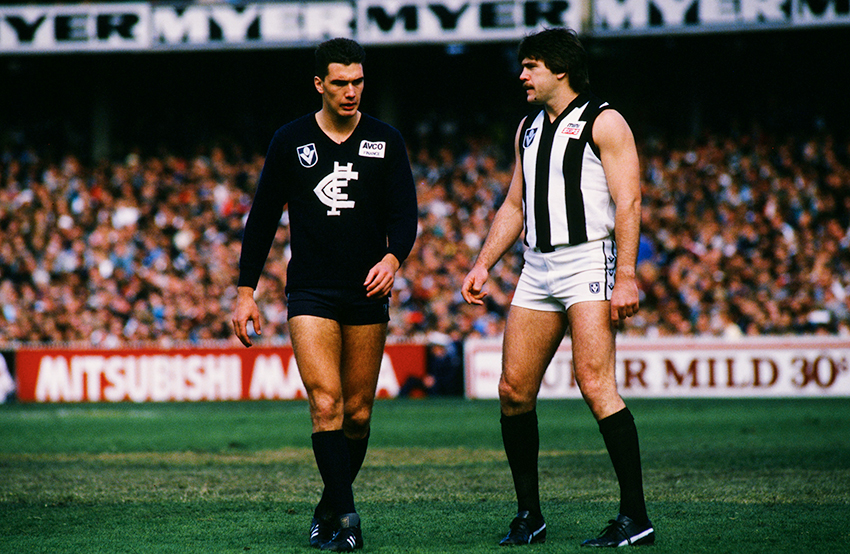 Carlton great Stephen Silvagni and Brian Taylor square off during the late 1980s.

“I thought I deserved it, I thought I was a chance 20 yards out and dead in front,” Taylor said after the game.

Years later, he told a different story, when he said to the Herald Sun: “Peter Cameron, who was a good bloke, gave me a dubious free kick. The players didn’t know whether it was downfield or what and Danny, who was five metres away, couldn’t believe it. This time I was only 25m out. It was about as far as I could kick.”

Cameron, perhaps putting a little mayonnaise on the events, said in 2008: “We knew that Brian was injured and I could tell it was fairly serious, so the whole thing was pretty well set up.”

“In those days there wasn’t the same scrutiny there is today and you could get away with something like that. I think I paid the free kick for hands in the back.

“Was the free there? I don’t think so, but Brian needed only one goal for his century, so what was I going to do – let him limp off on 99? That was a time when the circumstances were such that we looked after each other.”

This time Taylor could not miss. His kick sailed through the middle for his 100th goal of the season – the first time in 14 years since a Collingwood player had reached that milestone.

And on cue hundreds of the Magpie faithful rushed out on the ground as Taylor’s teammates, led by Mark Williams and David Cloke, circled around him for protection. Huge numbers of kids with banners and streamers, teenagers eager to be a part of it, and older supporters simply living in the moment crowded around the Magpie players to celebrate Taylor’s feat. The game was held up for more than five minutes.

When the crowd reluctantly began to leave the ground, so too did Taylor. The message had come from Matthews that it was time for him to come off.

The game was still to be won, and given Taylor could barely run, the coach wanted him on the bench. Other than a short, brief run in the third term, his day was done.

“I was really of no benefit to the team, I wasn’t able to run properly,” he said. “I was able to jog a bit, but not run how the coach wanted me to.”

Taylor had achieved what he wanted – 100 goals – and the Magpies would end up doing what they needed to do – win the game by 52 points, off the back of a seven-goal to one third term.

But, on the other side of town, the Lions upset the party. They proved a little too strong for the Swans, winning by 10 points, as disheartened Magpie supporters listened forlornly on the radio to the progress scores.

Collingwood’s finals were sadly over before they started. The only consolation for those Magpie fans headed home from Waverley that night was the fact they had seen Brian Taylor reach the magical three figures.

MAGPIES WHO TOPPED THE TON