A night of hellos and goodbyes 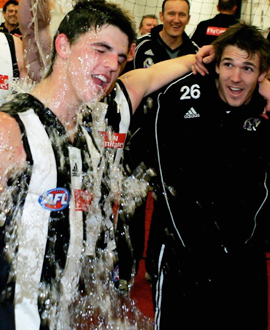 An 18-year-old Scott Pendlebury celebrates after securing victory in his league debut in round 10, 2006.

It was a match that seemingly had everything.

There was a bold beginning and a farewell of sorts. There was a 23rd birthday, a milestone of longevity and some past demons buried. There was an unusual career-best effort from a club champion, as well as a victory crafted from adversity, owing to a quartet of injuries – one of them which proved career-ending.

There was even a banner held up in the Cheer Squad which may have summed up the feeling of many Collingwood fans, but caused some angst among MCG officials.

Collingwood took on its nemesis, the Brisbane Lions, that June Saturday night before a crowd of 54,280 fans. Those in attendance and those watching at home on television were in for a real treat.

Let’s start with the beginning. It belonged to an 18-year-old young gun called Scott Pendlebury. Wearing the No. 16 jumper – he didn’t switch to No. 10 until 2007 – the No. 5 draft pick from Sale had his first pre-season rudely interrupted by glandular fever, but showed enough form in the VFL to be elevated for his first senior game against the Lions.

And it was a beginning of great promise. Pendlebury would join the “first goal, first kick” club that night, having 11 touches, including eight contested possessions. It was a sign of what was to come in the future. 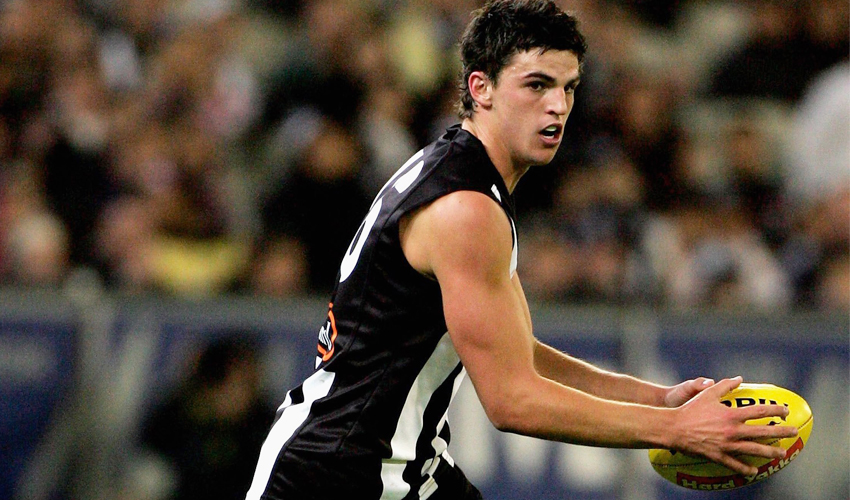 Scott Pendlebury takes possession during his first senior game in round 10, 2006.

The farewell centred on 29-year-old Blake Caracella, though no one knew it at the time. He was playing his 187th game – and his 27th in a Collingwood jumper – and it came against his former side, with whom he had won the 2003 premiership, against the Magpies. This would be his final match, with an incident bringing about a premature end to his successful career.

He was the player to wear the No. 10 immediately before Pendlebury took it on the following year.

The demons undone that night in 2006 were directly related to that 2003 Grand Final. The Magpies hadn’t beaten the Lions since the 2003 Qualifying Final, and the mental of scars of what happened in the Grand Final that followed, and in the years after, still plagued some of the Collingwood players. It was time to exorcise some of the Lions’ demons.

The 23rd birthday was Nick Maxwell‘s. An incident with Jonathan Brown early in the match would provide him with the sort of gift that no one wants – a broken leg, and six weeks on the sidelines.

The milestone was Mick Malthouse‘s 700th VFL-AFL game as both a player and a coach – 174 as a player for St Kilda and Richmond, and 526 as coach of Footscray, West Coast and Collingwood. More milestones were ahead.

And the banner? It was held aloft by ‘Joffa’ Corfe and read: ‘P— off Brisbane”. Many Magpie fans clearly agreed with the sentiment, even if the ground’s security didn’t have the same regard for it.

The unusual career-best came from Nathan Buckley, and it was interconnected with the injuries. Aged 34 and playing his 263rd game, Buckley was shifted forward to provide a target, given the numerous injuries suffered.

The Magpies’ midfield maestro would produce a night to remember, kicking a career-best six goals, including his 250th in a Black and White jumper.

Robert Walls, who had coached Buckley in his one season with Brisbane in 1993, predicted the Magpies would break their drought against the Lions in a column he penned in The Age on the morning of the match. 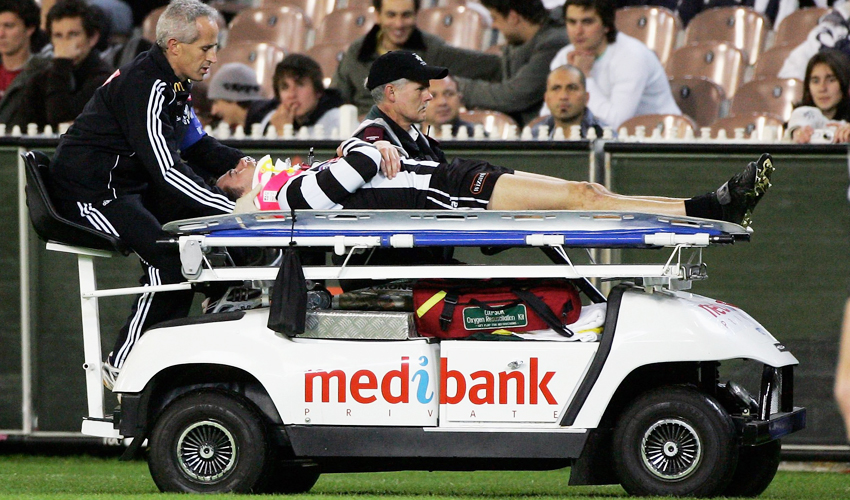 Blake Caracella leaves the MCG for the last time after injuring his neck during Collingwood’s win over Brisbane.

“Tonight will be the start of ‘payback time’ for Collingwood,” Walls explained. “Over the past five seasons, the Lions have felt superior to the Pies, physically and mentally. (But) it’s Collingwood’s time.”

The opening to the game was as hard-fought and ferocious as the rivalry between these two teams demanded. They didn’t like one another, and it showed.

The past was very much dictating what was happening in the present, and this time around Collingwood was determined to make sure they would not give an inch.

When Paul Licuria mistakenly gave off a handball to Ash McGrath, and the Lion kicked the first goal, the bad blood was on show for everyone to see. Some scuffles followed and more than a few Lions mouthed off.

In one passage of play, Brown crashed into Maxwell, and the Lions forward emerged with blood on his forehead. But the birthday boy fared worse. He had put his body on the line, and never flinched, even when one of the toughest players in the competition was coming at him. By quarter-time, Maxwell’s night was over.

But the injuries kept coming.

Dane Swan, 22 and playing his 40th game, suffered a hamstring injury. He, too, was out of the game, while Josh Fraser was also injured, but he managed to hobble back on late in the game to kick an unlikely goal.

No one was prepared for what happened next. Early in the second term, Caracella’s career changed forever. Fortunately, his life didn’t, but it was a close call.

The two-time premiership player went for a ball that came in short, and then appeared to lose his footing. His former teammate Tim Notting slid into him, with his hip inadvertently crashing into the Magpie’s head.

As Notting swept the ball away, Caracella was unmoved. No free kick was awarded, and almost as disturbingly, the play carried on as trainers rushed to Caracella’s aid.

One reporter noted: “A motionless body and a stretcher are among the two things you never want to see on a footy field.”

At least with the stretcher being called, the game was temporarily halted. An eerie feeling went around the MCG, with fears as to what had happened to the likeable Magpie who just couldn’t get up.

Caracella would later explain to Buckley in an exclusive interview in the Sunday Herald Sun: “I just got hit in the side of my head. Then I slowly rolled over and tried to get up.”

“If you look at the video, you can see my head raised, but my arms and legs don’t do anything. That was me being paralysed for a split second. The doc asked if I could move my feet and I could just wiggle my toes a bit. Within 30-40 seconds, he asked me to move my legs and I did a bit. I got worried because I could see he was worried.

“At the same time my arms were really sore. I actually said to the doc to take me through the interchange bench, but he said that wasn’t an option.”

Caracella was taken immediately to hospital. He had suffered a fractured vertebra and bruising to the spinal cord. Subsequent X-rays revealed that he had a pre-existing flaw in his spine.

The game was important, but Caracella’s welfare was infinitely more so.

Again, there was a strange mood in the Collingwood rooms at half-time – when the Magpies led by seven points – as the seriousness of Caracella’s injury began to sink in to his teammates.

Many in the crowd felt as if the Magpies’ hopes of winning ended with the limited interchanges they would have for the rest of the game.

Jon Ralph explained in the Herald Sun: “Enter Buckley. Pushed forward instead of resting on the bench as he normally would, he dragged the Pies back into the game.”

The Magpies kicked five goals to three in the third term, opening up the break to 21 points, and closed the game out with five more goals in the final term to secure a resilient 26-point victory.

Buckley had 29 possessions. But for once it was his goal tally which was more important than the disposals. He kicked six goals for the game, his highest tally in AFL football, but the four premiership points felt better.

“I’m happy to rotate through the forward line,” Buckley said after the game.

“When I went down there late in the third quarter it was to take that rest opportunity and it was good to get on the end of a couple of great passes.

“I know what forwards mean when they talk about getting good service because that was basically what I was able to get on the end of.”

Buckley won the three Brownlow Medal votes that night – the last of 34 BOGs he would awarded across a stellar career.

Malthouse described the victory as “an excellent win, an absolutely terrific win, and a very, very good win under the circumstances.”

“We’ve taken another step today . . . are we growing as a football team? Today I thought we grew a bit more.

“I think we’d lost our third player by the five-minute mark of the second quarter, or thereabouts, and under the circumstances, I thought the boys were just terrific.”

The relief of winning was satisfying, but there was relief too when it emerged that Caracella had narrowly dodged a bullet in terms of how the injury could have been infinitely more serious.

A leading sports physician Peter Brukner later detailed how Caracella was “very close” to becoming permanently incapacitated – “he is a very lucky man.”

Collingwood President Eddie McGuire agreed: “He’s lucky in his unluckiness, if you like. There doesn’t seem to be any permanent damage. (But) it was a close thing.” 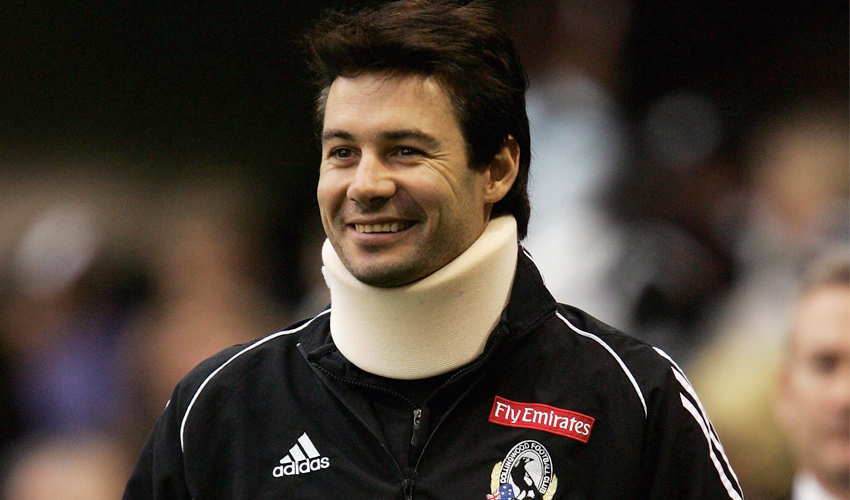 All smiles again: Blake Caracella walks to the Collingwood coaches box four weeks after sustaining his neck injury against Brisbane.

Caracella retired two months after the incident, explaining: “I’ve seen a specialist … and I’m at an increased risk of doing further damage to my spinal cord and possibly being paralysed (if he played on).”

“I’ve seen all the specialists and … it was guaranteed that it was too dangerous to play again, so I was obviously very disappointed.”

One of the first phone calls Caracalla took in the days after the incident came from Notting. Another was from Neil Sachse, a former Footscray player, who had become a quadriplegic in a match in 1975.

That put into context just how lucky he had been.

Caracella said later: “The CT scan showed the arteries that go through the vertebrae . . . there are holes in the back of the vertebrae where they go through and are held in place and I actually cracked the rim of the hole.

“So if that bone had gone backwards or splintered a bit and cut the artery, it was pretty much goodnight.

“You can see on the scan that there is a bit of bruising in the spinal cord behind C5. I said, ‘Does that happen very much when it comes to these types of injuries?’ He said, ‘No, not really, normally there is no bruising or it snaps in half.’ Amazingly, I didn’t snap it. I have been incredibly lucky in that sense.”

Fortunately, he was never going to be lost to football. Caracella became a Collingwood assistant coach (2007-2009) and has been an assistant at Geelong since 2010. And many good judges think he has what it takes to become an AFL senior coach one day.