The true measure of a footballer’s worth has always come during the heat of the finals.

Some melt under the pressure; others learn to deal with it over time; and a precious few seem to thrive on the big moments.

On that score alone, Bill Picken must rank highly as far as his contribution to the Collingwood Football Club goes across 11 seasons and 212 games.

For as good as he was in the home-and-away season, he always seemed to rise to the occasion when the stakes were at their highest.

No player who endured Collingwood’s string of Grand Final losses through the late 1970s and early 1980s was entitled to feel as frustrated by the absence of a premiership medal as Picken.

But there was a lot more to Picken – affectionately known as ‘Bustling Billy’ to the Magpies fans who adored him and ‘Wilbur’ to his teammates – than a footballer with an enviable finals record.

For he was, after all, a dual Copeland Trophy winner, a runner-up in three further best-and-fairest counts, and a constant on the ‘Mark of the Week’ segment on World Of Sport each Sunday, with his spring-heeled skills on show from his debut game in 1974 onwards.

Picken was a dashing defender, capable of turning defence into attack in an instant at a time when many back men still favoured safety first techniques. Yes, his awkward kicking style, and its lack of penetration, could sometimes frustrate the fans, but they loved him all the same.

And, importantly, he was a character when the game still coveted them. He often drove opponents – and more than a few of his teammates – to the point of distraction with his incessant banter on the field.

One teammate told Michael Roberts in A Century of the Best, “He was a fantastic bloke and a great player, but a raving lunatic … if you tried to tell him to pick up his man he would just call out ‘I’m concussed and I don’t know what I am doing’, and keep going.” 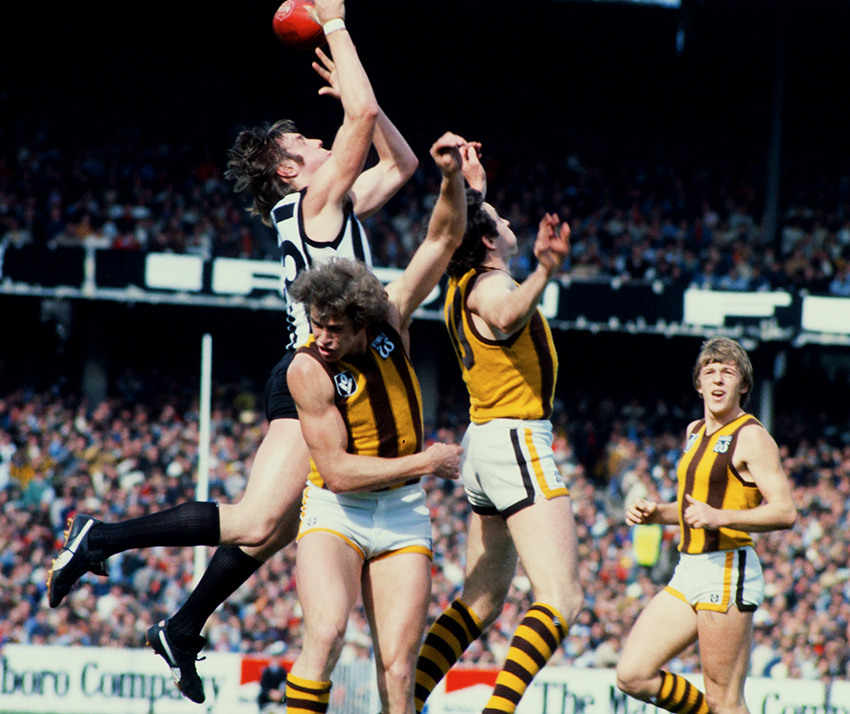 On the fly against Hawthorn in the late 1970s.

“Look out, here comes Billy” was his most favoured expression as he charged through like an unstoppable force in pursuit of, or with, the ball. His commentary was the same whether the Sherrin was in the air or on the ground, and his passion and personality endeared himself to the faithful.

Picken started his football in the tiny western district town of Macarthur. He was always a youngster playing against older players, and that continued when he ran out for Heywood as a 16-year-old in 1973, winning the club’s best and fairest and finishing second in the league award.

Picken made his debut against Carlton in round five, 1974, wearing the No.25 that would soon find itself on the backs of countless Black and White jumpers and duffle coats.

He kicked two goals with his first two kicks, and dragged down what looked like being the first of his spectacular marks – a one-handed grab on the back of fellow first-gamer Graeme Robertson. But while Picken had a sense of the occasion, the umpires did not.

He was deemed to have infringed on his opponent and was not paid the mark.

Picken played 17 games and kicked 25 goals in his debut season. He took a remarkable specky against Richmond in round nine, in John Greening’s comeback match. Fittingly, Greening is in the foreground of the image. And he kicked a career-high six goals against Melbourne in round 17.

That mark against the Tigers was among two of his favourites. The other was a brilliant ride on the back of St Kilda’s Barry Breen in round 16, 1976, and both were considered marks of the year.

But there are countless others worth recalling, including his launch on the shoulders of Mark Maclure in the mud of the 1979 Grand Final. Typically, his tongue is sticking out, like a Picken trademark.

Picken’s career stalled for a period in his second season, as he spent the first of 1975 in the reserves, albeit kicking 11 goals in one seconds game.

But he re-established himself in the second half of that year, and this one-time forward would soon come to relish a new role in defence, holding down the centre half-back position. Incredibly, he won the reserves best and fairest in 1975, and still finished third in the Copeland Trophy.

Picken soon became one of the best defenders in the game, with his passion, his courageous, straight-ahead approach and his endeavour noted within and outside the club.

He was also named at half-back in Collingwood’s Team of the Century when it was announced in 1997, holding down a half-back line with Albert Collier and Nathan Buckley.

His best recognition outside the club came in 1977 when he finished third in the Brownlow Medal. Only Graham Teasdale and Kevin Bartlett finished ahead of him.

Teammate Tony Shaw rated Picken among the best 10 Magpies he had seen, saying: “As all football judges say, top players perform in the presser-cooker atmosphere of finals. This is where Billy stood out. He just had a sensational record in finals.” And Shaw described him “one of the best marks I’ve ever seen. He could take them from any position – in front, running back into packs, and over the top.”

Holding the fort at half back against Essendon at Windy Hill.

In his book, A Shaw Thing, Shaw said the only negatives were Picken’s kicking and when his penchant for attack sometimes overrode the need to lock down on a player – “I always believe the one chink in his armour was that he wasn’t very defensive.”

Peter Daicos called him “undoubtedly, the best finals player (at the club)” and “a superb big-occasion player who played his best football when it counted.”

Picken’s ability extended to the cricket pitch as well, with the Collingwood district side, performing as always when it counted, making 88 runs in a grand final.

Sadly, a pay dispute after winning the 1983 Copeland Trophy resulted in one of the club’s most popular players moving to Sydney, much to the disappointment and frustration of Collingwood fans.

He played 28 games across two seasons with the Swans, but injuries began to bite for the first time.

No one was unhappy when he came home to Victoria Park for the 1986 season, and, although he wore the unfamiliar No.2, he played five more senior games. Sadly, there would be no fairytale premiership end to his time at Collingwood.

Two of his sons would show considerable talent, with Marcus playing 21 games with Brisbane, and Liam having a long and successful career with the Western Bulldogs.

Liam had come under Collingwood’s attention with its then VFL affiliate Williamstown in 2008, but the Bulldogs took him as a rookie.

He’s a very different player to his father, and playing in a very different era, as he explained in 2013: “Dad was working full-time – he’d go to training after work and play on the weekends. They had heaps of fun when they were playing.

“When Dad played, the game was full of characters.”

But there weren’t many characters like Billy Picken. Collingwood fans who will always remember his spectacular leaps, his dashing displays across half back and his extraordinary finals record can attest to that.