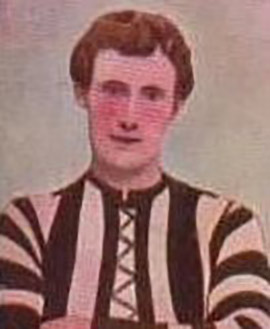 Of all the men to have coached Collingwood, few have seemed as counter-intuitive a choice as Dick Condon.

This is not in any way to decry Condon’s footballing ability, which was immense, or his ‘footy smarts’ which were substantial. Indeed, he is one of the most brilliantly talented footballers to ever pull on a Collingwood jumper. He had a wonderful career, and judges as hard to please as Jock McHale and Bill Strickland at different times rated him the best player they had seen.

But he was also a troublemaker, regularly at odds with club officials and umpires. His fiery and combative nature once saw him come to blows with one of his own players. That same season, while captain, he was suspended for three matches for swearing at an umpire. Later, he tried to lead his team from the field in protest at the umpiring, and the next week savagely abused another umpire, causing the League to disqualify him for life.

That suspension was eventually lifted some 18 months later but even so, given his history, it seems on the surface to have been a courageous decision to make Condon the club’s first paid playing coach, in 1905.

The club was clearly hoping that Condon had reformed. His leadership qualities, fired by his fierce competitiveness, were never in doubt, a fact underlined by his elevation to the captaincy in 1899 and 1900. He could be inspirational. He was also a brilliant tactician with a good understanding of the game, renowned for his ‘superb and alert’ football brain.

The Magpies hoped it was those qualities that would come to the fore when he took on the coaching role, with Charlie Pannam as captain.

For a while it looked like they might have been right. The team played outstanding football throughout the 1905 season and finished 10 points clear on top of the ladder. Condon himself had one of his best-ever seasons, rated as Collingwood’s best player and one of the best in the competition. But he was badly injured in the Grand Final as the Pies went down to fierce rivals Fitzroy. It was a hard loss to take.

In 1906, everything fell apart. Condon was suspended by the club’s committee midway through the season for being central to growing dissent within the playing group. The official explanation given for his sudden demotion was “club reasons”. The truth behind the dispute remains unclear but divisions spread throughout the team, and there were regular updates in the press over the unrest. In June, the Argus reported that “Collingwood is full of discord”. That same month the newspaper covered a game during which “it was impossible to overlook the fact that two of the forwards would not, under any circumstances, play to a third, however advantageous his position.”

‘Rosie’ Dummett, who had taken over from Pannam, resigned as captain (eventually being replaced by Arthur Leach) and there were rumours of players finding easy excuses not to play. It was all horribly messy.

While the unease settled once Leach took over the captaincy, Condon’s coaching tenure was never going to survive such tumult, and he finished with Collingwood as both player and coach at the end of the 1906 season. He spent 1907 in Tasmania where, ironically, he did some umpiring. Returning to Melbourne in 1908 he joined Richmond without a clearance – further angering those at Victoria Park. But his stint at Punt Road also ended badly when, as captain-coach in 1909, the Richmond committee became unhappy with his performance and asked him to resign.

Condon was a brilliant footballer, of that there can be no doubt. And he actually had many of the makings of an astute coach – what he lacked was the temperament.