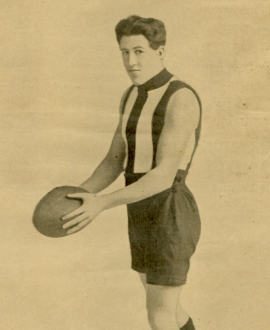 When Collingwood played Geelong at Corio Oval early in 1919, the Cats felt it necessary to devise a plan to combat the influence of a Magpie who was playing just his tenth game of VFL football. That player was Bill Twomey Snr.

The Kardinia Park brains trust brought in a youngster called Vic Gross, who was a champion sprinter from one of the Geelong colleges (at a recent sports meet he’d run 100 yards in 11 seconds – alone). Twomey had already established a reputation as one of the quickest footballers in the competition, but Geelong officials were confident their star athlete could quell the Magpie flier.

How wrong they were. As the Football Recordreported afterwards: “Twomey was like a man on springs. He outclassed his opponent so conspicuously that somebody else had to take on the task of stopping the phenomenal Magpie. But two for Twomey made no difference; he ran rings around all and sundry.”

That Geelong should bother preparing a special plan for a 10-game kid speaks volumes for the impact Bill Twomey had on the competition in those early games. Playing mostly as a wingman – in a famed centerline combination with Charlie Pannam Jnr and Tom Drummond – Twomey thrilled fans, commentators and his own teammates with his rare combination of electrifying speed and spectacular skills.

Years later, Gordon Coventry would recall that Collingwood players would wait for Twomey to get a break on his man, then would “bang the ball out in front of him”. (Coventry ruefully described chasing Twomey at practice as “the most futile thing I ever attempted at Collingwood”). Magpie president Jim Sharp said in 1919 that he had never seen a better quick man. Ten years later, with his VFL career long over, Twomey was still being billed as the fastest footballer of his generation.

“Leander”, in the Herald, said: “As a sprinter there are very few men in the League who can stay near him, but it is his dashes to the ball and his quick turns with it that thrill the spectators. He crouches low when running, but at the same time preserves a remarkable freedom in his limbs that enables him to get away with the ball in decisive fashion. Add to this a quick intelligence and a capacity for long, low, well-directed kicks, and you have all the essentials for a first class wing or centre man.”

As Leander noted, Twomey’s game wasn’t only about speed. He was also a spectacular mark, a brilliant ball-handler (especially in the wet) and a fine kick. Coventry said his drop kick passes were “like cannon balls”. And incredibly, he performed many of his earliest feats in an old pair of army boots!

Twomey was born in Heidelberg in 1900 and showed outstanding ability in both football and athletics as a schoolboy. At 15 he was already playing football as a wingman for Heidelberg, and after moving to Preston he was approached to join Collingwood following the Bullants’ 1917 grand final appearance. He broke into the Magpie senior team as an 18-year old midway through 1918. His first game was played in mud and slush at Carlton, but reporters quickly noted that the new boy “could run like a deer”. The eight games he played that year were enough to have one newspaper brand it one of the best debut seasons ever, while the Herald described him as “one of the greatest discoveries of recent years”.

Those early observations were confirmed over the next three years, as Twomey stamped himself as one of the most exciting footballers of his time. Then, with his future seemingly assured, he walked away from VFL football.

Twomey lovedsport – at almost every level (during 1919 and 1920 he occasionally missed Collingwood games to help out his old suburban team!). And in the early 1920s he was driven more by the desire to win a Stawell Gift than he was to keep playing in the VFL. He’d actually finished second in the Gift just before the 1919 season on very little preparation, and that near-miss had gnawed at him ever since. He really wanted to have a serious crack at Australia’s premier foot race so, at age 22 and with only 50-odd VFL games to his name, Bill Twomey moved to Stawell.

That sacrifice paid off two years later, when he won the 1924 Stawell Gift as one of the shortest-priced favourites in the event’s history. That year he also won the Ararat Gift, and three different events in one afternoon at Warracknabeal.

But while winning the Gift remained one of his proudest sporting memories, his impact in the Wimmera wasn’t limited only to the running track. He continued to play footy and was a popular captain-coach of Stawell, then later played at South Ballarat, South Bendigo, Nhill and Ararat, with a second stint at Stawell. His play thrilled spectators so much that people would flock to games from surrounding districts just to see him play. The catchcry ‘Kick it to Twomey’ came into vogue for years. In the early 1930s, newspapers were still proclaiming him to be the most spectacular footballer ever seen in the Wimmera.

Those years were part of a remarkable sporting odyssey that took Twomey and his family to just about every corner of the State. Most of his life was devoted to participation or coaching, and that even brought him back to the VFL with Hawthorn, South Melbourne reserves and North Melbourne reserves – he even spent time umpiring!

His boys, of course, famously followed in his footsteps. Bill Jnr, Mick and Pat all played seniors with Collingwood, being together for the 1953 Premiership. A fourth son, Peter, was also handy, and one of his kids, David, played with the Pies in the 1980s. Each of those boys was born in a different part of Victoria, further underlining just how far and wide Bill Snr had shared his talents and gifts.

Those gifts were many. But perhaps his greatest was a love of people, and of coaching youngsters. Even in his sixties he was still helping out kids like Peter McKenna, trying to improve their sprinting. He filled plenty of casual jobs along the way, but he derived most pleasure from dealing with people around sport. He played footy until he neared 40, and then continued to coach. Wherever he went he devoted much of his spare time to ‘unofficial’ coaching of school or junior football teams or other athletes.

From a selfish point of view, everyone at Collingwood must have wished Bill Twomey Snr had stayed longer at Victoria Park. But so many young footballers, teams and athletes benefited from his counsel and wisdom over the years that it’s hard not to think the game as a whole was better for his wanderlust.