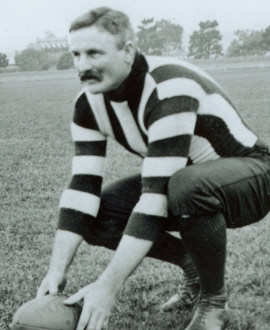 Of the 20 players who took to the field in Collingwood jumpers for the first time ever, on 7 May 1892, none made a bigger impact on the club – or indeed on football – than the mighty Bill Proudfoot.

He would captain the club (twice), play in three premierships and become the first Magpie to gain selection in an inter-colonial side, and also the first to notch up 15 years service. In an exceedingly colourful career he would also play under an assumed name – twice – and even save an umpire from a severe beating at the hands of an unruly North Melbourne mob.

Such is the summary of the remarkable career of William Henry Proudfoot.

‘Proudy’ was one of the more experienced players in that first Collingwood outfit in 1892. At 23 he’d already established himself in the Britannia team and had no hesitation in joining the new club on the block, rather than heading to Fitzroy.

He was named at centre half-forward that day, and had the honour of kicking the second goal in the club’s history (one media outlet mis-reported that he had kicked the first, which led some later historians to repeat the error, but the first goal actually came from the boot of Alf Toll). The fact that Proudfoot kicked a goal that day was in itself slightly ironic, because it was the only one he would kick in his entire career!

Proudfoot only played seven games in that first season, most of them at centre half-forward. But he played the last game at half-back, and started 1893 on the last line of defence. It was where he stayed for the rest of his career.

In that position, Bill Proudfoot became widely regarded as the best full-back of his time. He and centre half-back Jack Monohan were the defensive pillars of the first great Collingwood teams.

Proudfoot was a big man for his time – standing more than 183cm and weighing over 100kg. In 1894 The Australasian described him as “a magnificent specimen of muscular humanity.” When he fell on an Essendon opponent in 1897, the Herald reported that “the poor chap thought he had been struck by an avalanche.” Long-time Magpie trainer Wal Lee later said: “Proudfoot was a giant of a man, and when he played full-back for us he seemed to hide the goal space with his frame, and you just wondered how anybody could possibly get a goal through.”

Still, he was surprisingly speedy once he got a head of steam up, and he became known for his rushes out of defence, with “opponents bouncing off him like ninepins”. But his real strengths were his solid marking and prodigious kicking. He regularly kicked more than 55m, most often using the place kick or the drop kick, and usually aiming for either Monohan at half-back or Fred Leach drifting down from the centre. One of his punt kicks in a 1905 game was measured at 84 yards (76.4m).

Such massive kick-ins were a great defensive weapon in the early days of football, and Proudfoot became a resolute defender of the Magpie goalmouth – spoiling, punching and generally getting in the way of opposition attacks.

His defensive heroics even moved one of the club’s committeemen, Jack Joyce, to verse:

“A word about Bill Proudfoot – our sturdy centre back.
He is one of the best trumps, boys, we have got within our pack;
You will hear a yell, ‘It’s going through!’ come from a thousand souls,
But Bill goes up, there’s another yell – he’s marked right in the goal.”

Proudy was also valued and respected off the field too. The Argus said he played football with “a fine spirit of manliness and generosity”. “He can be cited to any youngster as the model of what a footballer should be.” Wal Lee recalled that Bill was “the biggest hearted fellow you could meet in a day’s march”. “Many a chap in the Collingwood colours was broke in those days. If Bill got to know that a chap was up against it, he put his hand in his own pocket to tide over the storm.”

He was a well-known local policeman, who later in life would receive a bravery medal for saving several people by stopping a pair of bolting horses in Swanston Street. And he was always ready to put himself in the line of fire, even when he wasn’t technically on duty.

That happened comically at Victoria Park one day when he grabbed an on-field intruder and deposited him unceremoniously over the fence – ripping the young chap’s strides in the process. It happened again – far less comically – at Arden Street in 1896, when a furious post-match mob descended on the umpire after a controversial North Melbourne loss, attacking him with fists, boots and sticks. Several players surrounded the umpire, Proudfoot protecting him with one arm while fending off blows with the other, in the process suffering such a beating that he collapsed on reaching the dressing room. The newspapers of the day weren’t kidding when they noted the umpire may have been killed had it not been for Proudfoot’s actions.

Given the quality of his play, and his standing both inside and outside Collingwood, it was no surprise he ended up captaining the team. But the circumstances were unusual. After Bill Strickland retired, Proudfoot and his fellow key defender Monohan were the two prime candidates to replace him. But then Bill asked for a clearance to Essendon (he had just been appointed the village constable at Kyneton and wanted to be closer), and even though it was refused it was assumed that the mere act of him requesting it would kill his chances of winning the captaincy. Instead he kept his hat in the ring, and ultimately prevailed in a close contest.

That, however, turned out to be something of a poisoned chalice. The captaincy actually didn’t suit big Bill. The travel to and from Kyneton proved a bit much for him, and he eventually resigned the captaincy midway through 1899. He got a second short-term crack at the job in 1901 after Dick Condon was suspended.

In 1903 the Police Commissioner decreed that policemen were not allowed to play football, so Proudfoot retired, playing only one of the last 13 home and away games. But he returned for the semi-final and grand final – playing under an alias! The press all knew who the mysterious ‘Wilson’ was anyway, and so did the public (as had been the case in 1900 when he’d played a single game under the alias ‘McKenna’). The farce was ended in 1904.

By then, Bill Proudfoot’s playing career was coming to an end. He stayed ready to play “if required” for two seasons, but pulled on the boots only four times, the last time against St Kilda in 1906. For many years after he was the sergeant-in-charge of the Clifton Hill police district, and later became an inspector.

But as far as Collingwood fans are concerned, his best work was always done in the last line of defence while wearing a black and white jumper. Over a long and glorious career he proved he was not just a giant of a man, but also a giant of a footballer.