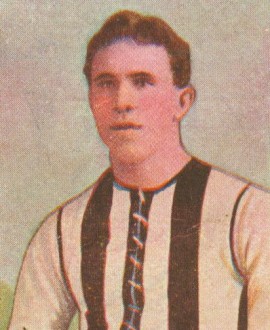 Only three men had stands named after them at Victoria Park. Only a handful have official club trophies that bear their names. And only one man has both – Bob Rush.

Those dual honours speak volumes for the contribution Bob Rush made to the Collingwood Football Club in a remarkable career that stretched more than 50 years. But Rush’s impact on the wider game of football was arguably even greater. Like Bruce Andrew who followed him, Rush was a crusader in the development of the game Australia-wide.

The Collingwood segment of Bob’s career began in 1899, when he joined the club from Christian Brothers’ College. Four of his brothers would also play VFL football later – still a League record (though only one, Bryan, played with Collingwood).

In his 10 years as a player Rush regularly filled a position in defence, most often on the half-back flank but sometimes at full-back or in the back pocket. He was no star as a footballer, but he was fast, consistent and determined. And he was good enough to win a spot in four VFL representative teams. Trainer Wal Lee once said that Rush was “a very handy type of footballer”, who could always be relied upon to keep his man quiet and clear the ball effectively.

He was renowned for his pace and persistence, and for his “fast and sure” dashes out of defence. As Punch put it in 1907: “Rush, the whirlwind half-back, does not belie his name. When he gets the globule and a straight run he does more damage than a mad bull in a crockery shop”.

The period from 1902-05 saw Rush at his peak as a footballer, regularly being mentioned among the team’s best players, and his smart ground play was a feature of the Collingwood defence. In 1906 he missed many games with a broken finger which eventually had to be wired. The operation was not as successful as had been hoped, and only helped Rush to regain partial use of the finger. Nevertheless he was back on the field again in 1907 and, according to The Herald, had “never shown better form”.

Rush was regarded as one of the game’s fairest players, and both teammates and opponents saw him as one of the most ‘decent chaps’ in football. But from his early days at Collingwood he seems to have set his sights on being much more than just a player. In 1902 he became one of the players’ representatives on the committee and was appointed assistant secretary the next year. Immediately upon his retirement from the field in 1908 he also took on the role of treasurer — a post he held for a staggering 42 years.

In 1910 he came up with the club’s motto, Floreat Pica, inspired by Floreat Etona, the motto of Eton College. He had some trouble finding a Latin word for Magpie, but ended up settling on pica, meaning “part-coloured”. Rush’s inspired suggestion — “May the Magpies Prosper” — remains the club’s motto to this day.

Bob Rush’s achievements as Collingwood’s treasurer were extraordinary. He quickly became renowned for the accuracy, thoroughness and attention to detail he brought to the job. When auditors went through Collingwood’s books after the 1950 revolution, they were amazed to find that they were virtually without blemish. He was earnest, genuine and methodical, and took great pride in his work. That the books were up-to-date and accurate was as much a matter of honour to him as it was a financial necessity.

Most importantly of all, Rush formed part of a stable administrative base that oversaw no fewer than nine Premierships. He was by nature a quiet man, though he was famous around the club for his hearty renditions of Henry Lawson’s poem “The Shanty on the Rise”. But as he continued to win praise for his work at Collingwood, it soon became clear that Rush’s skills could be used to benefit the game as a whole.

He became Collingwood’s delegate to the VFL in 1927, served as the VFL treasurer in 1931-32, president of the Australian National Football Council  from 1935-46 and acted as a member of the ANFC Standing Committee from 1948-70. So great was his contribution to the game in these roles that he was awarded an OBE.

Former Carlton coach and football journalist Jack Worrall once wrote: “It is men like Bob Rush, as an old player and legislator, who makes this game of football and keeps it pure. Australian football is safe when in the capable hands of men like the Collingwood delegate.” In 1937, after the ANFC had staged a highly successful carnival in Perth, the Agesaid: “He is one of the finest officials the game has ever known, and enthusiasts can depend on his energy, earnestness, fearlessness and ability to give splendid developmental drive and support to the sport throughout Australia.”

Despite all that he achieved for the wider game, one of his proudest moments came during the historic 1930 Grand Final that gave Collingwood its record fourth successive flag. Jock McHale was home in bed sick, so Rush delivered the half-time team talk when the players trooped into the rooms demoralised and trailing by 21 points. He called on their pride, their love of Jock, their love of the club and their desire for four in a row in a bid to lift them out of the doldrums.

Some of the old players who heard that speech could still recall its impact years later. “It was amazing stuff,” said one. “It made the hairs stand up on the back of your neck, and we all felt about a foot taller. After that we just couldn’t wait to get back on the ground and tear into them. We wouldn’t let anything stand in our way.” Harry Collier said Rush’s speech was the turning point. “I thought we were gone for all money. But after he’d finished speaking I knew we would do it — I could see it in the players’ eyes.”

Thirty minutes and 8.6 later, the game had been turned upside down. Debate has raged ever since about who should be credited with coaching the game, but the only thing that matters is the result – and the fact that Rush’s speech played such a pivotal role in it.

Bob Rush lived until the grand old age of 94, having remained an active rower until he was 91! In 1949, Collingwood marked his 50th year in the game with a lavish testimonial in the rooms at Victoria Park, attended by footballing luminaries from all over Australia. Secretary Frank Wraith described it as “the greatest function ever held at Collingwood”. Tribute after tribute was paid to Bob that night, but it was this line from Wraith, his long-time ally, that perhaps best encapsulated Bob’s contribution to the game. “The record of work performed by Bob for Australian football will be an everlasting monument to him, wherever and so long as the game is played.”