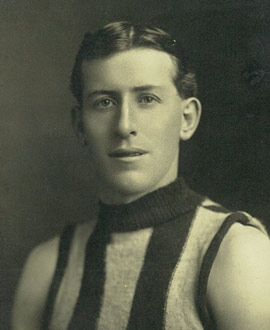 At the end of the 1919 VFL season, Con McCarthy must have felt like the king of the footballing world. In only his fifth season at the top level he had captained Collingwood to a Premiership and was widely considered to have been best on ground in the Grand Final, cementing his standing as one of the best followers in the game.

Yet just a few months later he was no longer the Magpie skipper. And within two years he wasn’t playing VFL football at all.

Remarkably, all this was of Con McCarthy’s choosing. He walked away first from the captaincy and then from Collingwood itself – and in the latter instance sparked controversy over issues that are still relevant to this day.

McCarthy had been a relatively late starter in his football career, not making his senior debut until he was 22 years old. Born and bred locally, he played junior footy with Fairfield before transferring to the Collingwood District Football Club, where he underwent a long apprenticeship.

He started with the Districts in 1912, when he was 19 years old. He played some outstanding footy there, especially in the 1914 finals series. This led to him being given a trial with the seniors in the 1915 pre-season, and he did so well that he was named in the line-up for the opening round of the year against Essendon.

He starred in his first two games, and the critics were in raptures. “In McCarthy, Collingwood have discovered a great back player,” wrote the Winner. “Tall, strong and fair, he promises to develop into a champion.” “McCarthy is a fine physical specimen, and looks like developing into an exceptionally fine player,” said the Australasian. “McCarthy, tall and clean limbed, is a footballer, and he is one of the handy sort, for I saw him in three different parts of the field doing well,” wrote the Age.

The critics all noted McCarthy’s physical development. In part that was a reflection of his age, but he was also just naturally a ‘beast’ who had a body readymade for the rigours of League football from day one. He weighed in at more than 90kg and was one of the strongest players seen in the VFL to that time. That made him very hard to shift in the rucking duels of the day, where shepherding was permitted.

McCarthy spent most of his early games in defence, with occasional forays forward or into the ruck. But when Dan Minogue left for the War at the end of 1916, McCarthy found himself spending more and more time in the ruck alongside tap ruckman ‘Lofty’ Hughes and rover Percy Wilson.

Wherever he played he proved himself to be a reliable and versatile player – one of the finest marks of his day, a long and reasonably accurate kick and a tireless worker for the team. He wasn’t quick but he was clever, quite skilful for a big man in his groundwork and blessed with excellent judgement. He also quickly established himself as a guy who loved to turn it on in the big games, and even in his first year there was a feeling that the Pies missed him badly when they decided to leave him out on Grand Final day.

After just four years with the team, McCarthy was chosen to take over from Percy Wilson as captain for the 1919 season. And what a masterstroke that proved to be! McCarthy had a sensational season, and along with Alec Mutch was generally considered to have been the best player in the Grand Final against Richmond.

McCarthy put in an absolute blinder against the Tigers’ highly rated ruck division. The Australasiansaid McCarthy’s decision to move himself more into the middle to offer Hughes greater protection was the defining move of the game. He put in a Herculean performance, following all day in what was later described as “an epic performance of energy, strength and endurance.” “He handled the team well, marked splendidly, saved the side in the ruck, and defended dashingly,” the Australasiansaid. “[In the end] it was Con McCarthy who had won the Premiership for Collingwood.”

But strangely, for one who appeared to be such a natural leader, McCarthy didn’t seem to enjoy it at Collingwood, and he asked to be relieved of the captaincy for the 1920 season. That didn’t stop the Victorian selectors from making him captain of the carnival team in 1921, however, even though he wasn’t the skipper of his club side. And it didn’t stop cashed-up clubs trying to tempt him with offers to take over at their clubs, either.

Unfortunately, one of those offers succeeded sooner than anyone could have imagined.

McCarthy had continued to play great footy after being freed of the captaincy. In 1921 he not only led Victoria but was also voted by readers of the Heraldas being in the top three followers in the competition. He was paid the standard Collingwood rate of £2 per game plus expenses that year, so when Footscray (then in the VFA) approached him with an astonishing deal – a guaranteed £400 over two years as playing coach – it shouldn’t have been a surprise when McCarthy said yes.

Maybe it shouldn’thave been a surprise, but back then it was. McCarthy’s move actually sparked fierce public debate about the amount of money involved (many considered it unseemly), the morality of a player walking out on his club to take such a large offer and the likely impact such moves could have on the game in years to come. Those kinds of debates have continued ever since.

Con McCarthy was, in some ways, an unlikely pioneer for players’ rights and higher pay packets. He was extremely modest, did not smoke or drink, and had for years walked 8km to and from the boot factory where he worked (until Footscray found him a new job at a soft drink factory). He was strongly principled and highly respected by both workmates and teammates alike.

Ironically, the man who had rejected the leadership role at Collingwood proved highly successful in an even bigger one at the Western Oval. He led his team to VFA flags in 1923 and 1924 and a memorable victory over Essendon in the challenge match of 1924. That year he also won the Recorder Cup for best and fairest player in the VFA.

But years later, when asked to nominate his greatest moment in football, he had no hesitation in choosing Collingwood’s 1919 Premiership win. Few would argue with him, but Magpie fans were still left to lament what might have been. Con McCarthy was probably the first truly star Collingwood player who left in his prime for a huge pay packet elsewhere. Unfortunately he would be far from the last.