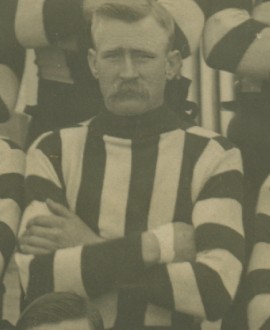 Dick Vernon is perhaps best remembered in football circles for being one of the few players in history to have made his VFL/AFL debut after he’d passed 30. But long-time VFL boot-studder Stan Bouchier once recalled that Vernon stood out to him for a different reason.

Bouchier served on Collingwood’s training staff as a boot-studder from 1896 until the mid-1920s. After that he filled similar roles with Footscray in the 1930s and then with South Melbourne in the 1940s. But of the hundreds of players whose boots he had helped prepare in that long journey, it was Vernon he remembered as being the most unusual of all.

The reason? Dick used to play football in cycling shoes! Topped off by a natty pair of ankle bandages.

It was obviously a memorable – and striking – combination. And somehow fitting for a player whose entire story was, like his footwear, rarely conventional.

Richard Edward Vernon was born in Eddington, near Bendigo late in 1878, but by the time he was 20 had made his way to Western Australia. According to one later report, he had come to Kalgoorlie to take part in the Fire Brigades Demonstrations (Dick was at that point a fireman).

Whatever drew him to WA, he certainly made quite a name for himself in the region in the early years of the 20th century. Besides his outstanding work with the Boulder City Fire Brigade, where he would later be made a Life Member, he was a highly regarded cyclist (hence his later choice of footballing footwear), an outstanding cricketer and a brilliant footballer. He played first with a local team called Cue, and then with the better-known Boulder City.

The man widely known as ‘Bendigo’ in WA soon became a star in that part of the country, and by 1905 was described by one local newspaper as “one of the shining lights in the football firmament”. “He is a footballer of the first water,” wrote Sporting Life. “He is as cool as a cucumber, fast and good in the air.” A brilliant rover, he played a key role in helping secure City the Goldfields Premiership in 1907.

Early the following year he returned to Ballarat for a visit with the Boulder Fire Brigade. Soon afterwards came the news that South Melbourne had made a successful pitch for his services. But they were gazumped by Northcote, who made a more attractive offer that included a job as curator and caretaker of the Northcote Cricket Ground – a role he would end up holding for more than 35 years. No less than a personage than the Northcote Mayor himself was there to greet Dick on his arrival and ferry him by motor vehicle to his new training ground.

Vernon enjoyed a stellar campaign with Northcote, but even so it was something of a surprise when he appeared at Victoria Park for the 1909 season. He had turned 30 late in December the previous year, and had clocked up a further 124 days into his 31st year by the time he made his first senior appearance, making him the third oldest Collingwood player of all time to have made his League debut (he looked old, too)

He soon made up for lost time, kicking a goal in each of his first two games and soon becoming a regular in the side, playing 15 games for the year. “He is a fine, smart footballer, and when roving was always prominent,” wrote The Argus after his debut against Fitzroy. “As a rover he was the most conspicuous and useful on the ground,” added The Age. “Vernon played an exceptionally brilliant game for his entry into league football,” wrote Sport. “He belongs to the fair, clean and manly class of players.”

Vernon soon formed a formidable partnership with the great Percy Wilson. Both were fair-haired rovers (Dick found that his ‘Bendigo’ nickname from the west was replaced with ‘Snowy’), and they shared both roving and forward duties. Dick was hard-working, fast, and won praise for his ability to dispose of the ball both quickly and accurately, almost always finding a teammate with his passes. By midway through his first year, The Sportsman had branded him one of Collingwood’s best players of the season to date.

It was a reputation that only grew in the years ahead. In 1910, Punch said he “played with the vim of a colt and the cunning of a pony racer.” The Herald said he was Collingwood’s “most conspicuous player”. “He handled the ball more often than any player on the field. He always made best use of it by passing into a comrade’s arms. Nobody disposes of the ball more rapidly and with better advantage than he does.”

He would play an important role in the 1910 Grand Final, kicking a goal and being named by some newspapers among our best players. The following year he was named in a VFL representative side that played in Bendigo.

In a ‘normal’ career, Vernon would by this point only have been getting started. Three seasons in, his best footy would usually have lay ahead. But by the time the 1912 season started, Dick had turned 33. So he hung up the boots after 51 games and took up the whistle, taking charge of four VFL games that season. It’s not known whether he kept umpiring at lower levels thereafter, but in 1915 he returned to footy for a year with Northcote. His cricket career lasted much longer, and he would continue to play as a wicketkeeper/batsman for the ‘Cote into the 1920s. He remained as curator of the ground into the 1940s.

In the end, Dick Vernon enjoyed a wonderful sporting life. He was an unusually old VFL debutant, with a penchant for unusual footwear, but he was also a gifted, multi-talented sportsman who played an important role in a Premiership during his three-year stint at Victoria Park. Given the way his journey unfolded, we should be glad he made it here at all.