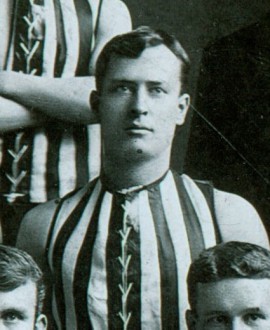 The story of Collingwood’s mid-season trip to Tasmania in 1902 has taken on mythical proportions down the years.

This was the trip where, according to the legend, the local opposition was so weak that some of Collingwood’s highly skilled players began ‘toying’ with them,trying dinky little kicks to teammates just out of reach of their frustrated opponents. Thus was the stab kick born, and with it came a fast, run-on style of play that flummoxed opponents, revolutionised football and brought the Magpies two successive flags.

But that Tasmanian trip was important for another reason – it signalled the coming of age of a footballer who ended up playing a pivotal role in both those premierships.

Jack Incoll was born in Ballarat, and played locally with the South Ballarat club before joining South Melbourne in 1899. He only managed four games there, kicking three goals, before spending the next two seasons in the relative wilderness with South Melbourne Juniors.

But the Magpies had been keeping an eye on him. He was tall, strongly built and could take a mark. He knew where the goals were. And he had a versatility that would make him a valuable commodity whether forward, back or in the ruck. When the Magpies offered him a second VFL chance on the eve of the 1902 season, Incoll jumped at it.

He struggled to make much of an impact early, managing only four of the first nine games and kicking only a couple of goals. But he starred in some of the Tasmanian games and seemed to be a different player when he came back. As The Argus noted: “Incoll showed the Collingwood people his true worth in Tasmania, and he reproduced that form on Saturday by playing dashing football in the ruck and forward, and by kicking a splendid goal. He is a sturdy fellow, and his striking form is a distinct gain to the side.”

Incoll continued to find the scoreboard in the latter part of the season, nailing seven goals in six appearances. Still, it looked as if he might be squeezed out of the talent-rich side for the grand final side until champion centre half-back Jack Monohan was withdrawn just before the game with injury concerns. Incoll came in, played at half-forward, and did his job as the Pies annexed their first VFL flag.

The next year, to underline the versatility that had made him such an attractive proposition in the first place, Incoll played as first ruck in the team that went back-to-back. Again he did well, and again he came away with a thoroughly deserved premiership medal.

By that time he was a regular in the side, and it stayed that way for most of the rest of his career. He was a solid mark and a wonderful place kick, getting great distance and accuracy (he finished his career with a more than handy 44 goals from his 68 games). He continued to flit between ruck and the forward line, with occasional stints in defence. But his best performances seemed to come in attack, including one memorable game in 1905 when he kicked six from half-forward. In 1904, one newspaper described him as “a star”.

But things weren’t going as well off the field. Late in 1905 he declared himself insolvent, blaming “sickness of self and family, pressure of creditors, and having to pay heavy interest on borrowed money”. Then, in 1906, a terrible tragedy befell him and his family. In April that year, his third child, Olive Margaret, died at just 20 months of age when her calico dress caught fire at the family home in Albert Park, after she and her older brother had been playing with matches. She died the next day, and the coroner found that death was due to convulsions, following on burns, from the ignition of a box of safety matches. He ruled the death accidental.

After that horrible incident, Jack Incoll looked for a change of scenery. In 1907 he tried – unsuccessfully – to join his youngest brother, Sydney, at Footscray (the clearance application was refused after he admitted he only intended to play in the finals). Two years later he headed north, crossing to Newtown in NSW for the 1909 season (during which he played for NSW against a visiting Collingwood side), and he even represented NSW at the 1911 Australasian Carnival. He later played for North Broken Hill, then West Torrens, and it was from Adelaide, where he was working as a labourer, that he enlisted in 1915.

He joined up at age 35 to be part of the 14/10 Infantry, then later was a stretcher bearer with the 1st Pioneer Battalion (where his strong build no doubt came in handy). He was wounded in action in France in 1916, though not seriously, and was hospitalized on a couple of other occasions with different ailments.

Jack Incoll was too old for football by the time he returned to Australia, but he could look back with pride on a fine Collingwood career dotted with outstanding performances – and two premiership medals.