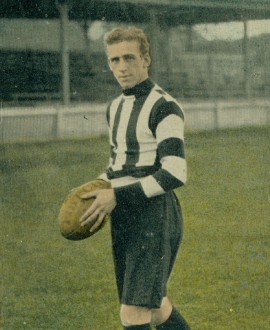 Football was a tough caper in and around the years of the First World War. But Jim Jackson inadvertently made his own task considerably tougher during one game in 1915.

Jackson had been in army training camp in Seymour but was given the Saturday afternoon off so that he could continue to pull on the boots for Collingwood.

Unfortunately for Jim, he left those boots back in Seymour. Instead, he had to play in army boots, which one newspaper wryly noted were the most highly polished boots ever to grace a footy field. Luckily the resourceful Collingwood trainers came to his rescue and they quickly managed to nail a few stops into his army boots so he could see out the game.

That was one of the few mis-steps that Jimmy Jackson ever took during his seven-year career at Victoria Park – a career that would have reached even greater heights had it not been for the First World War. As it was, he still finished his time at Collingwood as one of the game’s most dazzling wingmen.

Jackson’s VFL career started out with little fanfare – a solitary game for St Kilda against Collingwood in 1909. He played in the forward line for the Saints that day, after which the Australasian said he had been “commendably in evidence.” St Kilda dropped him the next week anyway and cut him at the end of the season, but the Pies obviously saw something they liked in the lithe young runner, and they picked him up the very next year after some promising performances in the trial matches.

Jackson took some time to settle at Victoria Park. His first game – ironically against St Kilda – did little to advance his cause, and he was in and out of the side for the rest of the season. He managed only five games for the year and played no part in the Pies’ successful finals campaign. Nine more games followed in a stuttering 1911, and Jackson’s career seemed to be at the crossroads.

But in 1912 the Pies were rewarded for their patience, when he moved permanently to the wing and found a new level. He was brilliant that year – fast, long-striding, long-kicking and prepared to take the game on all the time. He quickly became renowned for his surging runs and long, accurate kicking. “Jim Jackson, Collingwood’s wingman, has yet to meet his master,” wrote the Football Record. “He was in rare buckle against Fitzroy.” At the end of the year, the same publication pronounced him to be Collingwood’s most improved player of the season and predicted he would “shine as a star” in 1913.

They were right. He was in superb form throughout the year and was chosen for Victoria against South Australia, an honour that he backed up in 1914 with selection in Victoria’s carnival team (during which he was chosen as Victoria’s representative in a national goalkicking competition). He led a succession of opponents a merry dance during this time as he established himself as one of the game’s pre-eminent wingmen. Jock McHale, by this time his coach, described Jackson’s drop-kicking as “a perfect paralyser”.

He was just about the Magpies’ best player in 1914, and continued that form into 1915. At age 25, he was hitting the peak form of his career. Such was his importance to the team that his absence through injury from that year’s Grand Final, against Carlton, may very well have cost the Pies the flag.

Unfortunately for the Pies, life without Jim Jackson was something they had to get used to. He had already enlisted and was in camp during the latter part of 1915, and by 1916 was in France with his two brothers – and right in the firing line. He wrote a determinedly cheerful letter back to his teammates from there, which said in part:

“Everything going fine – could not be better. I see where Fitzroy came out on top, and I think the Allies will be there very soon, as everything seems to be going our way now. I am acting quartermaster-sergeant for our company at present, so am doing well. I weighed myself the other day – 12st. 5lb. Never been that before. This is the life for me.

Well, I have heard some rows, but this place beats all; guns going day and night. Can’t get much sleep for them, but am getting used to it now. Some guns should wake the dead, and when these are going there is no chance at all for slumber.Paddy Rowan will soon be in to see me. We are billeted about a mile and a half behind the firing line, but it is just as bad as the front on some days, when Fritz gets angry and sends over a few coal boxes. They play hell. One of our chaps got killed in his bed the other night.”

(Sadly, Paddy Rowan never made it across to see Jim: just days after this letter appeared in The Winner newspaper, he was killed in action.)

Jackson survived the rigours of the War in fine style and returned to play 12 further games in the black-and-white stripes in 1920. Nor surprisingly he had lost a little of his trademark pace, and the emergence in his absence of speedsters such as Bill Twomey Snr, Charlie Pannam and Tom Drummond, meant competition for places on the wing was fierce.

So Jackson headed to Hawthorn, then in the VFA, as their captain. He retained that role as the Hawks made their entry into the VFL, leading them in their first VFL match in 1925. Before that game the Football Record said: “Men such as Jimmy Jackson, the old Collingwood stalwart, … are just the sort to work a young team into a side that will have to be reckoned with.”

By this time Jackson had moved into defence, his gradual loss of speed counterbalanced by his experience and astute football brain. Played mostly at full-back, he was still regularly listed among Hawthorn’s best players that season. He eventually retired late in 1926, because of persistent leg troubles. He also coached the Hawks in 1932.

Jim Jackson’s career eventually covered three VFL clubs and 17 years. As good as he was at Collingwood – and he was very good indeed – there’s little doubt that, like so many of his contemporaries, his best playing years were left on the battlefields of France.