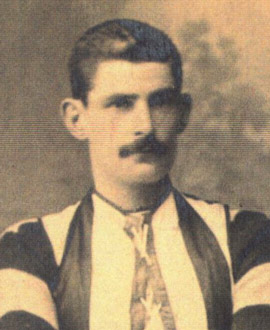 You don’t always have to be the best player in a team to make the best captain.

Not even Lardie Tulloch‘s most fervent admirers would ever have claimed him to be the star of the Collingwood teams he played in – big names such as Proudfoot, Condon, Pannam, Rowell and Fred Leach would far more easily have laid claims to such a title. But there’s no doubt that, as a leader, he was head and shoulders above his contemporaries – and a major factor behind the Magpies’ first VFL Premierships.

Lawrence Gideon Tulloch, known within football circles as ‘Lardie’, was part of the Class of ’94 – key players who came to Victoria Park that year and played a huge role in the club’s first flag in 1896. He had been born in Carlton, and played with Carlton Juniors in 1892, where he earned a reputation as “a real clipper”. But it was Collingwood who was keenest and stole him from the Blues early in 1894, at the relatively old age of 23.

Unlike many others of that year’s debutants – big names such as Charlie Pannam, Dick Condon and Frank Hailwood – Tulloch didn’t make much of a first impression. “Beyond towering for high marks he seemed to have no other special gift,” noted the Argus after an early game.

In 1895 he was rebuked by Ern Copeland for missing training, and in 1896 he missed most of the season – including the grand final – through injury and illness (firstly an ankle injury, then rheumatism in his feet after getting wet during a team visit to Ballarat).

Tulloch’s career, it seemed, was at the crossroads. But he responded by producing his best season yet in the first year of the VFL. “Tulloch never showed the Magpies what he could really do until this season,” reported the Herald. “He is now one of the most useful players they have got.” A year later, the Herald reported that Tulloch was now considered among the Magpies’ best all-round players.

Tulloch’s versatility was one of his main strengths. He played in many different positions – back, forward (he kicked more than 70 goals in his career), or following, where he often acted as the shepherder to the ruckmen. He was a wonderful mark and a more than useful kick, but it was the hard, slogging work he did that gradually won him the admiration of his teammates. He was strong, tough, durable and fit – a real workhorse.

When Bill Proudfoot stepped down from the captaincy for the second time at the end of 1901, Tulloch was the popular choice as his replacement. And it was here that Tulloch really excelled. He was the perfect example of a good player who made a great captain.

Although quietly spoken and reserved, he was respected immensely by his peers, and also within the wider football world. He preferred to inspire by deed rather than by word, and rarely raised his voice either in anger or in exhortation. His shrewd and inspiring leadership was a key factor in the club winning its first VFL Premiership in 1902.

After the grand final, Markwell, in the Australasian, wrote: “Much of their success has been attributed … to the fact that in Lardie Tulloch, their captain, they have a leader of uncommon ability and one with whom every man amongst them has worked in the greatest harmony. He has not only directed his team in admirable style but has himself played artistic football, both forward and following.”

After the Pies went back-to-back under Tulloch’s leadership the next season, Markwell added further tributes: “The undemonstrative Tulloch commands the obedience and respect of his team and the good opinion of players in other teams as well, for he is a thorough sportsman and plays the game in admirable spirit.” “Such men as Tulloch are the pillars of the game,” concurred the Age.

By the end of 1904, aged 33, Lardie decided that he’s had enough of the rough and tumble of football. He immediately took up umpiring: so highly regarded was his knowledge of the game and so unquestioned his integrity that he moved straight into VFL umpiring ranks in 1905.

He was well regarded as an umpire, officiating in the finals of 1906 and taking charge of the 1907 grand final between Carlton and South Melbourne – making him the only man in football history to have captained a Premiership team and umpired a VFL grand final.

He eventually retired from umpiring in 1912, after which he concentrated on his home life and work as a cab driver. He loved tinkering around the garage of his Carlton home, fixing one thing or another, and remained driving until late in life.

His name might not be well remembered today, but Lardie Tulloch was one of Collingwood’s greatest early leaders – and one of only three men to have led the club to more than one flag. The others on that list are Harry Collier and Syd Coventry – so Lardie is in pretty good company.