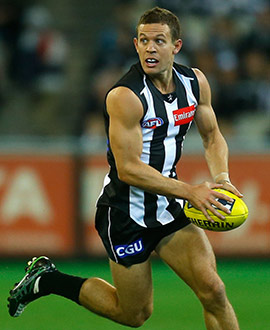 Hugely-talented midfielder from Xavier College and Sandringham Dragons who was overall number two selection at the 2001 national draft. However, he concentrated on studies in 2002 and played just one game with VFL affiliate club Springvale after recovering from osteitis pubis. The son of former Richmond and Sydney full-back Ray Ball, Luke was also a highly talented cricketer.

When he finally made his debut in early 2003 he looked as if he had been on the League scene for years. His anticipation and vision were keynotes of his play and he had an impressive debut year apart from a couple of mid-season injuries.

In 2009 he seemingly fell out of favour at St Kilda with two stints in the reserves before returning just before the finals. He was only on the ground for 54 per cent of the Grand Final, but did well in that time.

messy break with St Kilda saw him request a trade to Collingwood before going into the draft and being picked at No.30. He produced a strong year and capped it off with a premiership medallion, ironically against his old side. Ball refused to claim any vindication and he was widely lauded for his humility.

He had an even better year in 2011, but injured a knee in round three of 2012 and missed the rest of the year. He returned two months into 2013 and remained solid until the end, bowing out twelve months later.