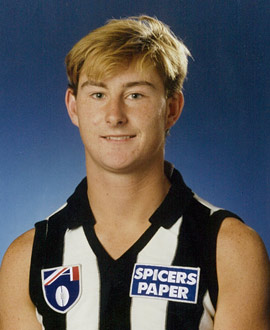 A tall utility whose flexibility made him a valuable asset in various positions, Richardson was a stalwart of the Collingwood teams of the 1990s who helped keep the flame flickering while the club endured its lowest ebb on and off the field.

Richardson, a true utility who made his mark at centre half back, centre half forward and in the ruck, followed in the footsteps of his father, Wayne, who played 221 games for the Magpies between 1969-1978.

Recruited from Macleod, in Collingwood’s northern suburb heartland, Richardson’s football lineage stretched back to grandfather Arnold who played over 60 games with South Fremantle and represented WA and included his uncle, Max, who, like Wayne, was one of Collingwood’s best players in the 1970s.

Mark Richardson was always destined to play with the Magpies and started out with the under-16 development squad before training with the senior side while still a teenager in the lead up to the 1990 Grand Final.

In 1991, his first senior season, Richardson booted seven goals in a game against Sydney at Victoria Park, followed by another six against Adelaide a week later, immediately stirring hopes of a big career.

Unfortunately, injuries and inconsistency meant that he only played eight senior games over the next three seasons due to a succession of injuries.

It took until 1995 for Richardson to develop into a regular fixture in the second half of 1995, playing mostly as a defender and occasionally taking a turn in the ruck, before cementing his place in 1996.

Season 1998 was one of his finest, playing 19 of a possible 22 games, kicking eight goals in the second half of the season and giving his side some badly needed stability at centre half back before moving forward. He deservedly capped off the season with a top 10 placing (ninth overall) in the Copeland Trophy.

By 1999, he was one of the club’s most mature and reliable players, and he was still capable of having the odd day out, such as when he had 26 disposals, took seven marks and won 18 hitouts against Richmond in a surprise win in round 19, earning his first Brownlow votes in the process.

Under Mick Malthouse, Richardson was considered a steady older head in a side that was undergoing a swift regeneration and he remained an integral figure in 2000 and 2001.

He opened 2002 with three goals in the loss to Richmond on Easter Thursday but injuries saw him drop out of the side after round three.

Now aged 29, he bobbed in and out of the side in the second half of the season and was considered stiff to be omitted after kicking two goals from 13 disposals in Collingwood’s loss to the Western Bulldogs in round 22. It meant he missed the team’s first final since 1994, and denied Richardson the chance to play in September after 141 home and away games.

Richardson was originally named as an emergency for the Grand Final and loomed as a potential replacement for the suspended Jason Cloke, but an injured thigh during the final training session put paid to any last minute hopes of a well-deserved selection on the biggest day of the year.

Nobly, Richardson stood aside as an emergency after injuring his thigh, his place taken by Ben Kinnear, in a similar vein to Simon Prestigiacomo and Dayne Beams in Grand Finals that followed later in the Malthouse era.

“I was a bit of a long shot but Mick Malthouse was pumping me up as a bit of an option,” Richardson said a decade later.

“I hurt my leg at training during the week so I would never have known if it would be or Jarrod Molloy who played in the Grand Final. I’ll never know to this day if I’d have played or not but I would have doubted it.”

Richardson remained on the list in 2003 but was unable to break into the senior side despite several strong performances for the club’s VFL affiliate Williamstown. He fractured his elbow during the pre-season but hit his straps in the VFL and loomed as a potential mid-season inclusion after kicking five goals against Coburg, but suspension for misconduct put paid to his hopes of a return.

Fittingly, Richardson played a key role in Williamstown’s 2003 premiership. The Seagulls beat Box Hill by 29 points at Princes Park, with Richardson, Glenn Freeborn, Rupert Betheras and Jarrod Molloy signing off on their time at Collingwood with a state league premiership. Among Richardson’s junior teammates were future premiership Magpies Nick Maxwell and Dane Swan.

“Even though it was VFL footy, it was still a highlight,” Richardson later reflected.

“I played terribly. I was touch and go whether I was going to play. Mick Malthouse wanted me to play because I had played all my career without a final.

“Even though it was a VFL final I got injections in my feet and ankles to play. I couldn’t really walk unless I was injected.

“It was a bit of a gesture from Mick and Brad Gotch (Collingwood assistant and Williamstown senior coach). I’ve still got a lot of people from that Willy team that I can catch up with. Even though you’re not best of mates, you’ve still had that success together.”