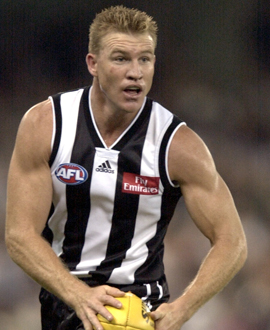 As a child Buckley constantly moved around the country as his father Ray was a professional football coach after having played as a ruckman for Woodville in the SANFL in the 1960s and 1970s. Buckley rebelled at the age of 14 and gave up footy to play tennis, then his father sent him to Victoria’s Salesian College to rekindle his enthusiasm in a footy environment.

By 1991 he was in Port Adelaide’s reserves as an 18 year-old and the following year he had progressed so rapidly that he won the 1992 Magarey Medal.

Brisbane had a hold on him and North, Geelong and Collingwood feverishly pursued him with offers of multiple trades. He was Brisbane’s second best and fairest in 1993 – his only season at the club, but it was well-known that he had an escape clause in his contract and Collingwood was over the moon when he joined the Magpies.

He overcame the burden of expectation and from his earliest days was central to the Collingwood game plan with strategies built over his magnificent kicking in after behinds were scored. Under state of origin rules he was bound to the Allies team and at times in these games it seemed that he was one of the few men who could build passion about the concept.

Collingwood jealously guarded its hottest property and was relieved when he re-signed with the Pies after Port Adelaide had tried to woo him back to Adelaide when his contract ran out at the end of 1996.

Similarly at the end of 1999 Collingwood made no secret of the fact that it wanted to sign him for life.

Buckley had to work against a public perception in his early years that he was self-centred and arrogant, but to the contrary his coach Leigh Matthews said that early in his career he tried to short-pass too often. Buckley has also admitted that he tried to hide his own feelings of insecurity behind a facade of self-assurance.

When rumors were flying in 1993 that he would cross from Brisbane to Collingwood, the Magpie players gave him a hard time when the teams met. As a result Buckley played his worst game for the year. Ironically one of the players giving him a serve that day was Craig Kelly who later became his manager.

Even when Buckley became captain of the Magpies in 1999 he realised that he had to tone down his on-field criticism of teammates and remain positive and at the start of 2001 took part in a special leadership course to modify his approach. If the football public needed any reminder that Nathan Buckley was one of the most talented players in the AFL competition it came during the international series played between Australia and Ireland at the end of the 1999 season. Buckley, the captain of Australia, adapted better than any other Australian player to the vagaries of a lighter, round ball.

In 1999 Buckley was Collingwood’s leader in more ways than one. Despite missing five games after he fractured a jaw, Buckley was a runaway winner in the club’s best and fairest award and finished equal third in the Brownlow with 20 votes. His powerful kicking, strong and clearcut ball handling and possession winning ability were a constant menace against opposing sides.

Buckley was in sensational form for most of the 2000 season, then injured a knee against Port Adelaide in Round 13 and although he missed just the one match, his form tapered. Even so, Buckley’s extraordinary ability to win the ball saw him dominate many games and he eventually polled 18 Brownlow votes, just six behind Melbourne’s Shane Woewodin. He won All Australian honours for a fifth consecutive year and as expected, romped away with Collingwood’s best and fairest for 2000.

He was so dominant as a player that the fact he came third in the 2001 best and fairest made news in its own right.

He later led the Magpies brilliantly in their narrow 2002 grand final loss to Brisbane. His consolation was a Norm Smith Medal as best on the ground.

Buckley had a wonderful 2003 season, culminating in a Brownlow Medal triumph. He polled 22 votes to share honours with Sydney’s Adam Goodes and Adelaide’s Mark Ricciuto.

Buckley also led the Magpies to another grand final in 2003, but again they went down to the Lions.

In 2004 he began fairly well, but a hamstring injury sidelined him for the best part of two months. Despite the setback he still ran seventh in the club championship and was an effective player.

The hamstring problems re-occurred early in 2005 and there was even doubt over whether he would continue, but he came back strongly in the second half of the year.

By 2006 his role had been modified with more time on the bench and less on the ball, but he remained a potent force and the man to whom Collingwood looked when things were going badly.

Buckley retired when it was clear to all that his body was finally wearing down in 2007.

After two years in the football media, Buckley became a key cog in Collingwood’s coaching succession plan when, in July 2009, it was announced he would learn the ropes for two years as an assistant to Mick Malthouse before taking the reigns in his own right in 2012.

While the intention was for Malthouse to remain as Director of Coaching, he left the club after his coaching tenure ended after the 2011 Grand Final.

Buckley led the Magpies into a Preliminary Final in his first year at the helm before guiding his young side into the Elimination Final the following year.