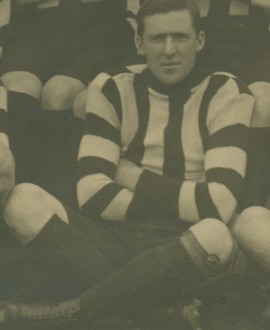 Few players can ever have been involved in a more bizarre postscript to a Grand Final than Richard Daykin was in 1910.

Daykin had played well in that year’s Premiership decider against Carlton. He kicked one goal, set up another for Dick Lee with a clever short pass and was influential in the Magpies’ 14-point win. The game is still remembered as one of the wildest grand finals ever played, and Daykin was involved early when he retaliated against a Carlton player who had struck ‘Lofty’ Hughes.

In the last quarter, an altercation between Collingwood’s Tom Baxter and Carlton’s Jack Bacquie sparked an all-in melee. Baxter and Bacquie were each suspended for a season (two others copped 18 month suspensions), but the biggest sensation came at the Tribunal hearing when Daykin claimed it was he, and not Baxter, who’d been involved in the stoush with Bacquie. Most observers, including the umpire, dismissed Daykin’s claims but the VFL eventually – remarkably – accepted his version of events, removing Baxter’s suspension and letting Daykin off because of his noble action in coming forward.

But Daykin’s actions possibly weren’t as “honourable” as they appeared. Daykin had already pretty much decided to travel to Western Australia in 1911 (one of his brothers had been planning a trip for 1910 and delayed it), so he knew he wouldn’t be playing VFL in 1911 in any circumstance. And he and Tom Baxter – the man who got off because of Daykin’s evidence – were good mates from their days together in Bendigo. So there’s every chance Daykin’s letter to the VFL was nothing more than a ruse to help a mate. If so, it was a long shot that paid off.

It’s not well known that Baxter and Daykin had also been embroiled in controversy two years earlier, when both had been playing with Long Gully in the Bendigo Football Association. Baxter, Daykin and one other player were accused by their own club of ‘playing dead’ during a game against Eaglehawk, and the Association initially found Baxter guilty and suspended him for life. But the finding was overturned on appeal and both Baxter and Daykin were able to continue playing.

By this stage both Baxter and Daykin had already started their Collingwood careers. This was a time when Bendigo allowed its players to play with VFL or VFA clubs at weekends, in addition to their mid-week local obligations. Two of Daykin’s brothers, Robert (South Melbourne) and Bert (Essendon) had already made their VFL debuts, and there was never any doubt Richard would follow suit. (A fourth brother, Perce, joined them with Carlton in 1914, where he played more than 100 games).

Richard – known universally as ‘Bony’ – played with Long Gully in 1907-08, that club describing him as a “great acquisition”. “Bony Daykin has the makings of a first class footballer,” wrote the Bendigo Advertiser. “All he wants is a little more experience.”

By 1908, he was emerging from his brothers’ shadows and winning his own name. Daykin played mostly as on on-baller, or in the forward line. He was a strong player and a good kick, though perhaps not the most committed to the sport. But nobody ever doubted his talent. Collingwood had by this time started to pay plenty of attention to the Bendigo area, and Tom Baxter had been at Victoria Park since the start of the year. So late in 1908 the Pies gave his mate Richard Daykin a trial, too. And he did well enough in those five games – the last five of the season – to convince everyone that he had a big future.

But then tragedy intervened. In January of 1909, another of his brothers, Thomas (himself a good local footballer), was killed in a mining accident when he was crushed by a boulder in the Carlisle Mine at Long Gully. Thomas was just 25, and was soon to be married. Richard was a miner himself, and would later work alongside Dan Minogue, using their time together to help convince him to come to Collingwood. But in 1909 the loss of his brother hit Daykin hard, and he seems to have played little football until mid-year, when he returned to Long Gully.

In 1910, however, he returned to Collingwood for another crack at the VFL, and he played an important role in helping secure the club’s third VFL pennant. He was good all year, managing 16 games and playing especially well in the big matches. Punch newspaper said he had “displayed classic science” on the forward line. After his efforts in the Grand Final, most observers thought he would – this time – be able to capitalise on his promise.

But Daykin had other ideas. He surprised everyone by turning his back on the VFL and heading to Subiaco, presumably to try his luck work-wise. He travelled with one of his brothers, and it was from there in March 1916 that they both enlisted in the Expeditionary Forces. He spent most of his time in France with the machine gun section of the 16th battalion and was wounded twice before returning to Australia late in 1919.

By this stage further tragedy had befallen the family: the oldest child, John Louis, who had been working at the mine when Thomas was killed, had died in Bendigo in 1917. Even worse was to come, however, when the youngest of the Daykin boys, George Leslie, died in 1920 when he suffered a heart attack after diving into the Golden Square swimming pool.

In all, Richard Daykin was one of 10 children. Four of the boys played VFL football, making the Daykins one of the most productive – if least well remembered – footballing families of all time. If Richard had taken his football more seriously, and if fate had been kinder to his family, he might just have been the pick of the bunch.